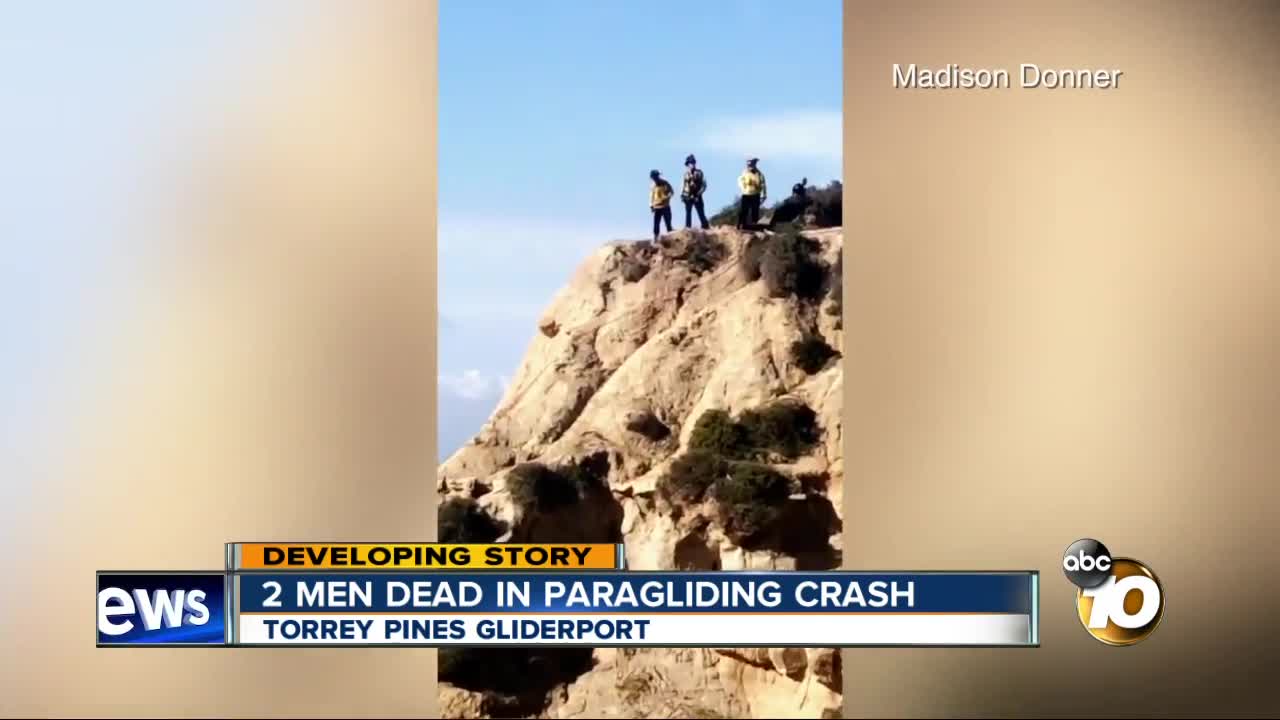 TORREY PINES (KGTV) - Two paragliders, one from San Diego and one from Orange County, died after colliding in mid-air and crashing into a cliff Saturday afternoon.

It happened near Torrey Pines Gliderport around 2:45 p.m. Police confirmed both paragliders were men. One of the men was 61-years-old and the other man was 43-years-old, officials said. Both of the men were certified .

Witnesses sat stunned when they watched the paragliders become intertwined, "I initially heard the collapse of the chute... I heard a collision, and some kind of sound, and looked over and saw two people falling from the sky," Madeline Henderson said.

"It was spinning but it was like in slow motion and I could see the guy, I don't know what he was trying to do but I felt bad for them," Irene Marquez said from the passenger seat of a car. She said it was her first time at the Gliderport and was traumatized by what she saw.

Rescuers have recovered both of the bodies.

Witnesses say the paragliders collided mid-air, a chute collapsed, and they spiraled to the ground and hit the cliffs.

“I heard a collision and saw two people falling out of the sky,” A witness described the chaos after two paragliders intertwined and fell. @10News pic.twitter.com/ajcsYGkAuk

We share our sorrow at the loss of two members of our close-knit soaring community. While each individual who engages in gliding of any kind understands the risks inherent in our sport, and though the Torrey Pines Gliderport is amongst the world’s safest soaring sites, it is with heavy hearts that we mourn yesterday’s loss. Currently, our investigative team (which combined has over a 100 years of experience in gliding sports), as well as our local authorities (including the San Diego Police, San Diego Fire Departments, and the Medical Examiner’s Office) are reviewing the available data in order to assess what went wrong and why. Once those investigations are complete, we will share our combined conclusions. Until then, we are unable to further comment on these on-going investigations. In the interim, we ask that all celebrate the lives of the two individuals lost in yesterday’s tragic accident and that you keep them, and their families, in your thoughts and prayers.