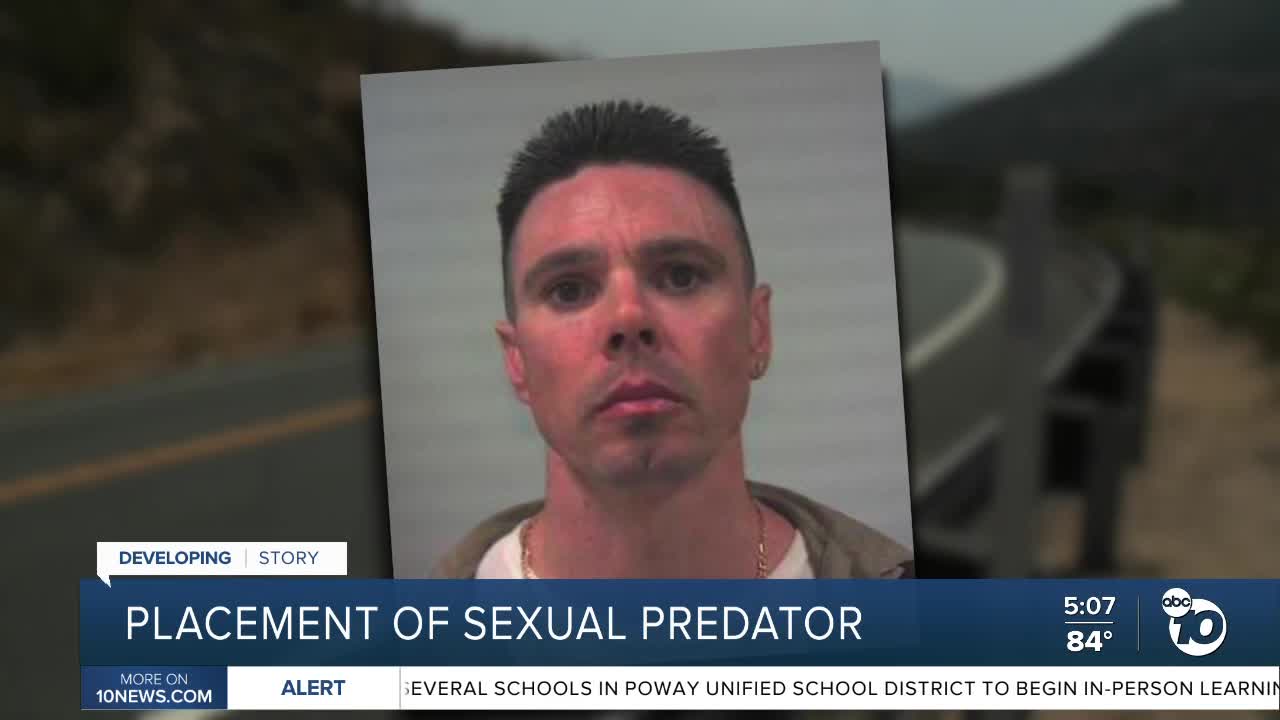 SAN DIEGO (KGTV) — A school district superintendent and a Native American reservation leader in North County are speaking out against the proposed placement of a sexually violent predator.

On Thursday, there were strong reactions from those who are close to North County's Pauma Valley home where sexually violent predator Joshua Cooley could soon be placed.

“When people like this are placed by our borders, it's very concerning,” Temet Aguilar, the Chairman of the Pauma Band of Mission Indians, said Thursday.

Aguilar is encouraging the hundreds of families on and near the reservation to speak out against the placement of 40-year-old Cooley, whose victims were 12-years-old.

“They think this is an area that's rural and there's nobody out here but actually it's more dangerous. Predators can hide out here. We have a tremendous amount of agriculture. We have rural lands,” he added.

Valley Center-Pauma Unified School District Superintendent Ron McCowan told ABC10 News they'll write letters if they have to to make sure they're voices on the matter is heard.

“We'll write the letters if we have to. We'll show up at the court hearing if we have to," McCowan said. “We'll make every effort we can. We'll work alongside our local officials and make sure that our voice for our community is heard and make sure they understand the risk that they're putting our young children in.”

This Tuesday, DA Summer Stephan sent a letter to the Department of State Hospitals, urging the Department to find a different place for Cooley, who's from Northern California, not San Diego. He has no local connections.

It's unclear why the Department is seeking his housing in San Diego.

Next month, a Humboldt County judge will consider a request from the Department to place him in Pauma.

If granted, it would mark the first time that such a predator from outside San Diego would be placed in our county.

DA Stephan has called the move reckless and irresponsible. She said that in July, a San Diego judge struck down a request to place 75-year-old sexually violent predator Joseph Bocklett in the same Pauma home.

According to an ABC station in Northern California, Cooley’s been denied placement in at least four different areas in and near Humboldt.

The Department of State Hospitals will not confirm any information about Cooley, citing privacy concerns. A Humboldt County court official called ABC10 News on Thursday to say the Court would not comment.

On Oct. 9, at 8:30 a.m., a hearing on Cooley's placement will be available for viewing at https://www.humboldt.courts.ca.gov/.

Those interested in submitting a public comment for the hearing can do so between Sept. 15-23. Comments will be sent to the DSH and Humboldt County Superior Court prior to the October hearing.

Public comment can be sent via the following methods:

More information on sexually violent predators, including legal definitions and requirements for designations can be found at http://www.sdcda.org/preventing/sex-offenders/index.html, and also at the Department of State Hospital’s website, https://www.dsh.ca.gov/.