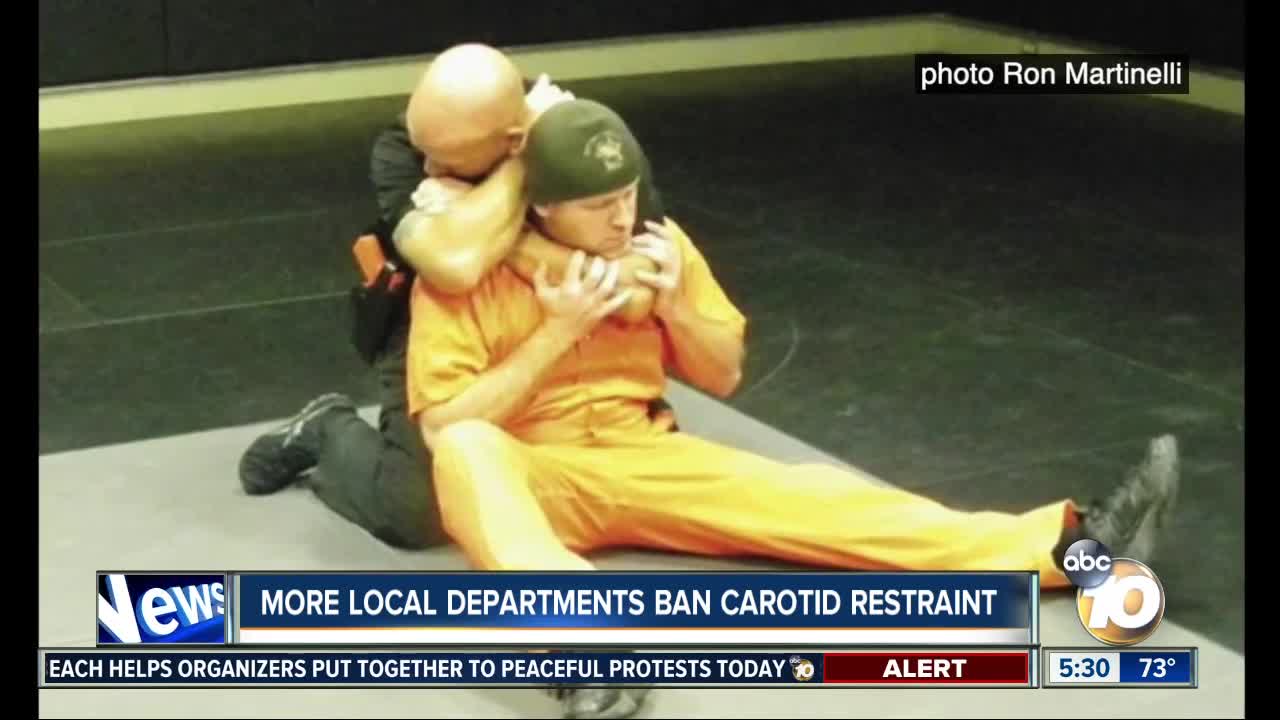 SAN DIEGO (KGTV) - More local law enforcement agencies are dropping the controversial use-of-force technique known as carotid restraint, following outrage over the killing of George Floyd. Earlier this week, San Diego Police Department said that it was dropping the use of the technique.

On Wednesday, 10News interviewed the mayor of Coronado, who is calling on Governor Newsom to issue a statewide ban.

San Diego Sheriff Bill Gore reversed his decision on the use of the technique. In a statement sent Wednesday afternoon, he wrote, “In light of community concerns, and after consultation with many elected officials throughout the county, I am stopping the use of the carotid restraint by my deputies effective immediately. I have and always will listen to any feedback about the public safety services we provide. Working together, we can ensure San Diego remains the safety urban county in the nation.”

The City of La Mesa also announced that the police department will ban the technique.

Earlier in the day, a spokesperson for the Oceanside Police Department said that its officers rarely used the technique and the department officially dropped the use of the technique on Tuesday.

After the San Diego Police Department reported on Monday that it was dropping the technique, Coronado Mayor Richard Bailey issued a letter on Wednesday morning to Governor Gavin Newsom, urging a statewide ban of the use of carotid restraint among law enforcement.

“It does significantly increase the risk of permanent harm to individuals and it has become a symbol of police brutality within communities of color throughout the country,” said Mayor Bailey.

Community rights activist Bishop Cornelius Bowser said that SDPD’s ban is a good first step but more needs to be done. “This does not whatsoever fix the problems that we have in our communities, especially in the black community of police brutality and the way communities are being policed.”

Bishop Bowser also told 10News that he wants SDPD to issue greater clarity on the language of the ban and how officers who use it will be held accountable.

10News also reached out to Chula Vista Police, Carlsbad Police, and El Cajon Police to see whether their officers are still using the technique.

A spokesperson for the El Cajon Police Department wrote to 10News, “It would not be appropriate for us to comment on the policy decisions made by a different agency. The carotid control hold is currently an authorized technique available to our officers to affect the arrest of a violent or combative suspect. The El Cajon Police Department regularly evaluates our policies and procedures.”

National City also announced Wednesday that it would end the use of the carotid restraint. Read the department's statement below:

The community in general has expressed concerns regarding the use of the carotid restraint by police. The National City Police Department has listened to those concerns and effective immediately, our officers will no longer use the carotid control hold as a less lethal option. In order to maintain the trust and confidence of our community, we will remain open to discussion and continue to challenge ourselves to improve in all areas of our work and profession.

The President of the San Diego Chiefs’ and Sheriff’s Associatio, Chief Roxana Kennedy, sent out a news release Wednesday evening listing departments throughout the county that have ended the use of the carotid restraint. See the list below:

10News is waiting for replies from the other departments.