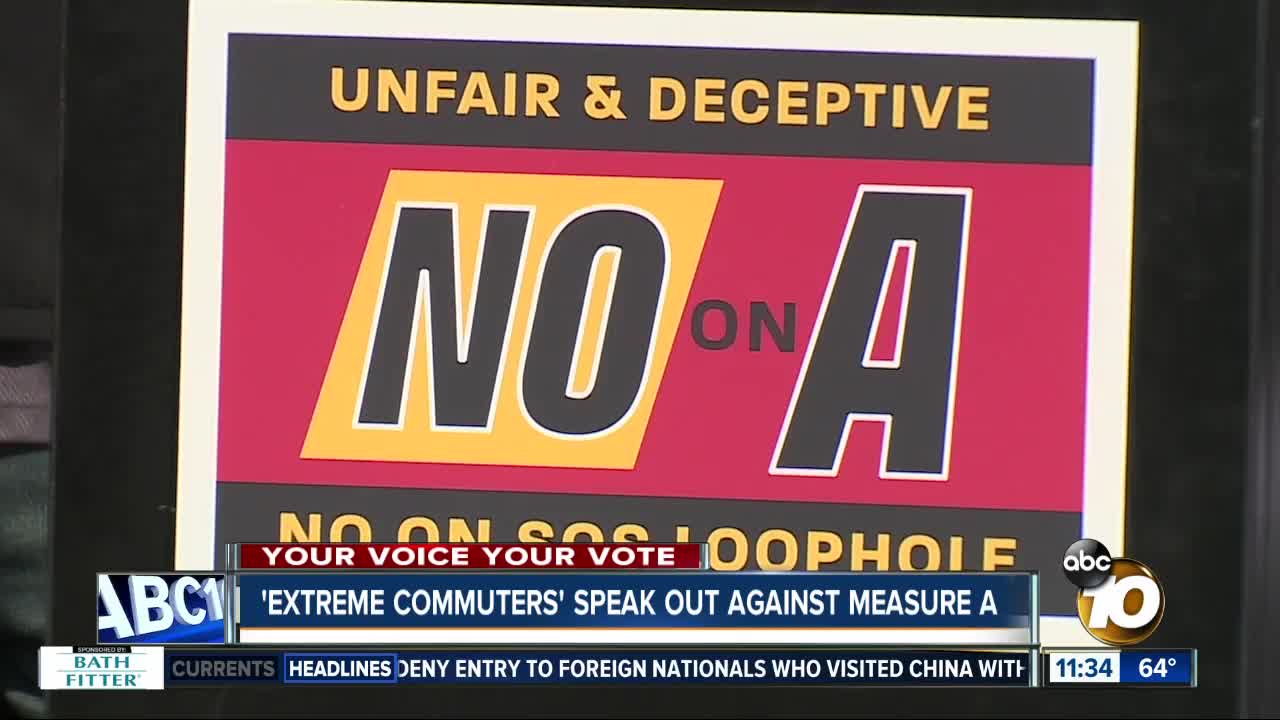 Those opposing Measure A gathered to speak out against the proposal.

SAN DIEGO (CNS) - A group of San Diego's ``extreme commuters'' Monday urged voters to reject Measure A when it comes up for a vote on March 3, contending that requiring a countywide vote on major development projects would make San Diego's strained housing market even worse.

Measure A, if passed, would necessitate a countywide vote on every major project that has been granted a General Plan amendment. Previous public votes on large projects have tended to fail.

The commuters, some of whom travel daily from Tijuana or Riverside County to work in San Diego, gathered in a City Heights park to say they have largely been priced out of San Diego County and the measure would exacerbate the issue.

``The thought of leaving San Diego, a home where I've built a career and family, is heartbreaking to me but I can't ignore the fact that rents and home prices are rising faster than my income,'' Kourosh Toumadje, a father of four who works as a production planner in a laboratory, said at the news conference. ``To my family -- this is home. But if Measure A is approved, I may eventually have no choice but to move my family from the only place we know.''

Any project adding more than six homes needing a county General Plan amendment would come to a vote. According to the ``No on A'' organizers, this limitation is just on residential homes, not on casinos, resorts, hotels or factories. The Yes on A faction said it would limit sprawl into fire-prone areas.

Supporters of the measure say politicians are influenced by the building industry -- which is adamantly opposed to Measure A -- and the General Plan shouldn't be altered.

``The purpose of Measure A, SOS Initiative, is to provide San Diego County residents with a stronger voice in how and where housing is built in the unincorporated county,'' the campaign's website reads. ``This grassroots initiative simply requires voter approval of proposed changes to the County*s General Plan that would significantly increase residential density in fire- prone rural and semi-rural areas.''

According to the commuters, the 20-year measure is ``riddled with loopholes'' and would dramatically reduce home building in the county. Yes on A campaign material said the measure would end ``back-room deals'' and let the public decide.

Early voting began Monday, and the last ballots are due March 3.