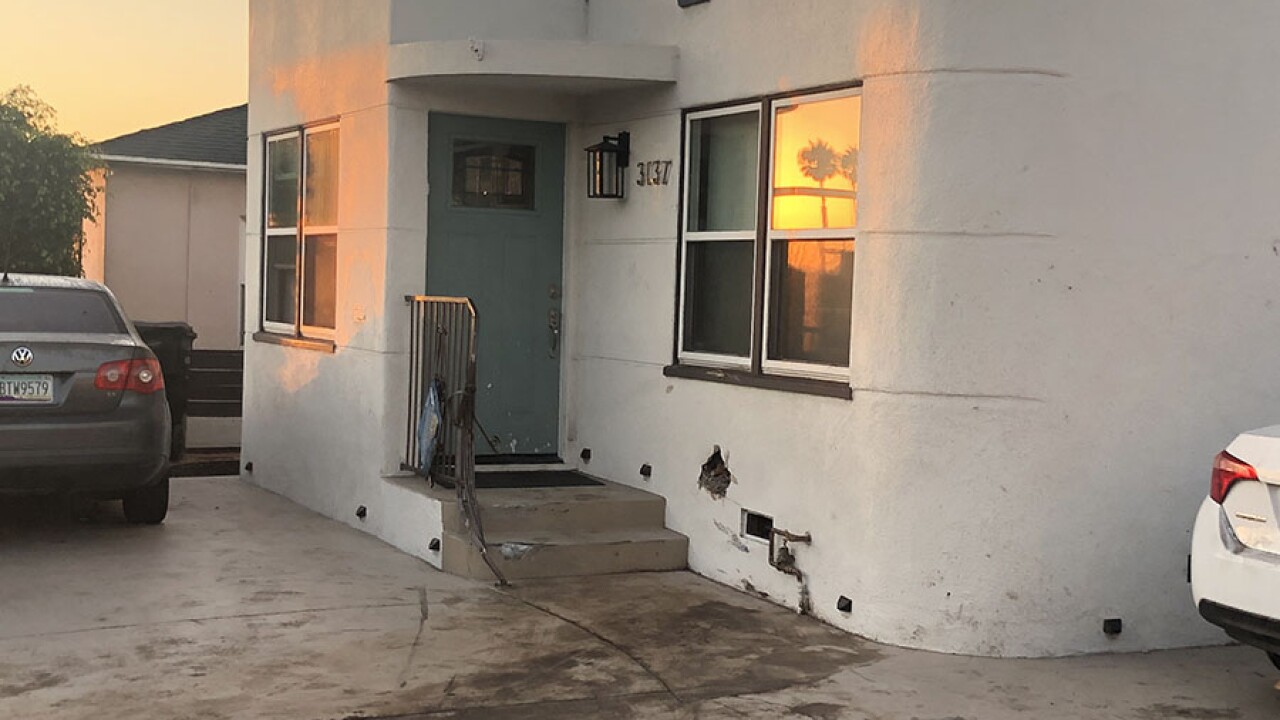 SAN DIEGO (KGTV) - A Point Loma family is trying to raise awareness of what they call a “dangerous” intersection, after cars have slammed into their house.

The home the Cohen family began renting this year sits at the intersection of Nimitz Blvd. and Evergreen St., and has been hit twice since they moved in.

According to San Diego Police, officers have responded to collisions at that intersection at least twelve times in the last five years.

“I went to go wake up my mom and told her that we should probably get out of here because there's a car going into our kitchen,” said 12-year-old Max Cohen, speaking about a crash that happened the week the family moved in back in January. “You look out the window and see cars speeding down the road and not stopping at all on this turn.”

Before they started renting, the Cohen’s weren’t notified that the home had a certain reputation for being hit. 10News reached out to the homeowner, who says that information was also not disclosed to him before he purchased the house this year.

The City of San Diego tells 10News it is aware of the history of the intersection. Over the years, many cars have slammed into the house on Nimitz Blvd, sometimes resulting in serious injuries to the occupants in the home.

A City spokesperson said upgrades to improve safety have been made, based on studies and evaluations by the City’s traffic engineering division.

The following statement from the City of San Diego outlines the safety upgrades:

“In the recent history, the City has evaluated the area and updated the intersection to include guardrails, a flashing beacon with a “curve” warning sign and a dedicated bike lane. The approaching lanes have been reduced from to one lane from two lanes and the signal at the approaching intersection has been modified to remain red between midnight and 4 a.m. to direct vehicles to stop before the intersection –- In other words the light remains red during the hours of 12 a.m. to 4 a.m. until a vehicle is detected.”

But, the Cohen family said these changes are clearly not working.

“It might not hit the house as much as it could, but it still does, which it shouldn’t at all,” said McKensey Cohen, whose bedroom was hit by a car in October. “Since then we've just been on edge about everything. We can hear the street for miles.”

The family said they have contacted the City’s code enforcement department to come check the stability of the home, specifically McKensey’s bedroom, but they have not received a visit.

The family hoped to move out the day of the last crash, but they had to postpone the move. Now they’re asking all future tenants to be aware before they end up in the same situation.

A GoFundMe account has been set up to help the family move out.