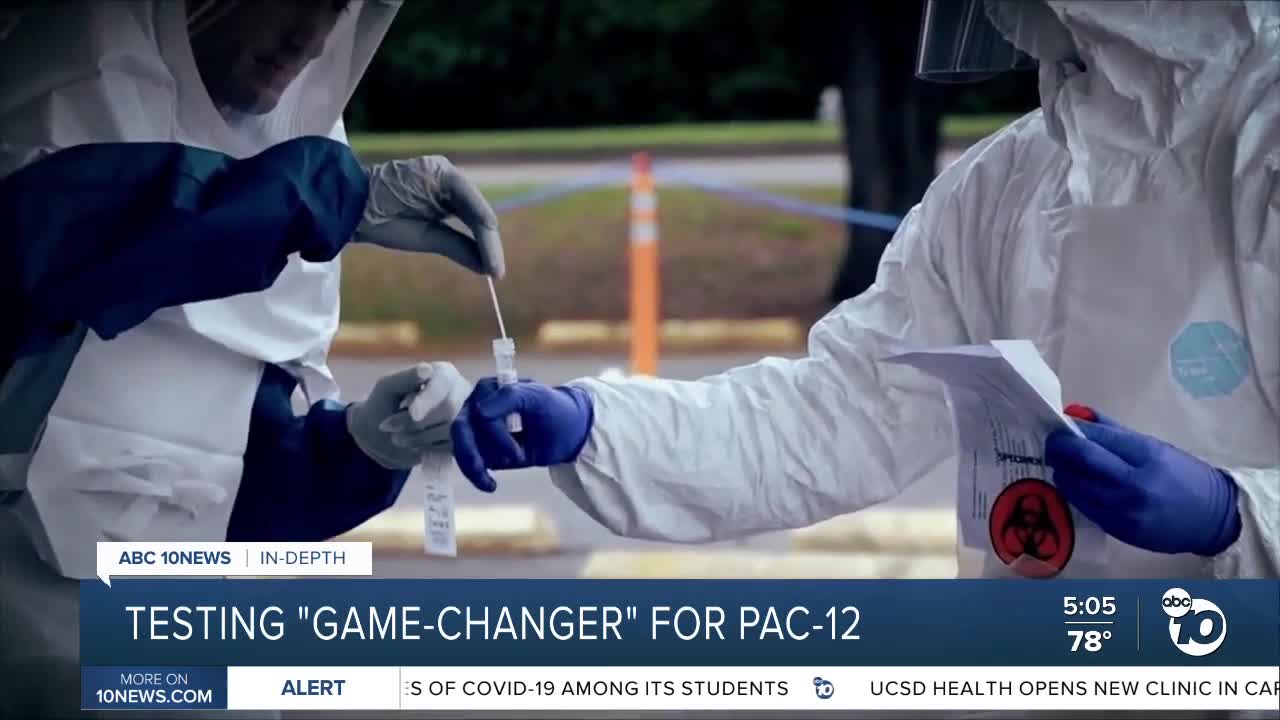 The commissioner of the PAC-12 says 15-minute testing technology from a San Diego company could be the “game-changer” needed to restart competition in the conference before the end of the year. SAN DIEGO (KGTV) — The commissioner of the Pac-12 says 15-minute testing technology from a San Diego company could be the “game-changer” needed to restart competition in the conference before the end of the year.

The Pac-12 is considering restarting college football as early as mid- to late-November, according to ESPN, as long as it can secure approvals from state and county lawmakers in California and Oregon.

In some conferences, college football is entering its third week, but Pac-12 schools like USC and UCLA are still in workout mode after the conference voted last month to postpone all sports until 2021 at the earliest.

League officials are now revisiting that decision and considering an earlier timeline after signing an agreement with San Diego-based Quidel Corporation to provide rapid antigen testing for all athletes, including daily tests for high-contact sports like football.

“The access to rapid result testing that we can implement on even a daily basis with some sports with high contact will be a real game changer for us,” Pac-12 commissioner Larry Scott said after touring Quidel’s facility this month.

Most nasal swab tests are genetic tests, or PCR tests, which seek out the genetic code buried inside the virus’ protein shell. These tests are considered the industry standard, but they require processing in a lab to convert RNA into enough readable strands of DNA. Results can sometimes take days.

Quidel’s nasal swab test is what’s called an antigen test, which looks for parts of the virus’ protein shell. It can be read by machines at each university in about 15 minutes.

“No one's going to be spreading the virus because no one will be engaging in practice or competition with the virus,” Scott said.

That’s the hope at least, but the partnership with the Pac-12 will be an important test for Quidel’s diagnostic product.

Quidel was the first company to get a rapid antigen test on the market, securing an emergency use authorization in May. But there were questions about the accuracy of the test compared to PCR tests in the small sample size provided by the company.

In July, Quidel published more data showing its antigen tests matched up with PCR tests 96.7% of the time when a positive was detected. But those results were only among individuals who were actually showing symptoms.

“The question that people have is in the asymptomatic population, will the data look similar?” said Quidel CEO Doug Bryant in an interview.

Bryant said the company has unpublished data that will be forwarded to the FDA showing “very similar” relative accuracy to PCR tests in asymptomatic individuals, but he said the goal of the partnership with the Pac-12 is to investigate the tests even further.

“We want to know that the tests we’re doing are appropriate for use in the asymptomatic population. And we need to demonstrate that, to not only the scientific community but to the public at large,” Bryant said.

The testing program with the Pac-12 will essentially be a large clinical trial to find out if rapid testing of athletes can prevent spread, backed by the muscle at some of the premiere research universities.

The Pac-12 is hoping the testing program will convince lawmakers to ease restrictions on college athletics, particularly in California.

Although the NFL played a game at the new SoFI Stadium in Inglewood last weekend, nearby USC cannot gather in groups of more than 12 players.

There are now four antigen tests on the market. Quidel plans to roll out its Sofia 2 testing machines to Pac-12 universities later this month.