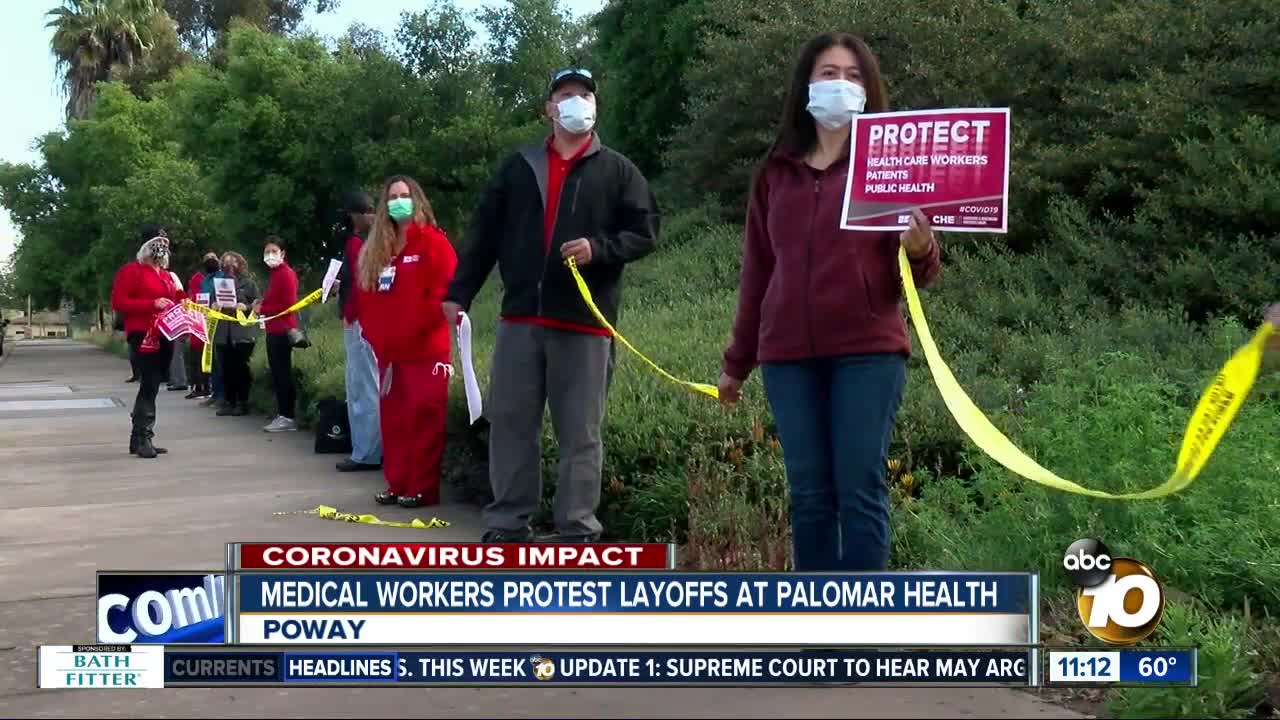 POWAY, Calif. (KGTV) -- Dozens of nurses and health care workers held a protest in front of Palomar Medical Center in Poway Monday morning to express their outrage over Palomar Health’s decision to temporarily lay off workers amid the coronavirus pandemic.

Over the weekend, Palomar Health announced a 21-day layoff of 221 employees who are not considered bedside care workers. As of April 8, the affected workers will be without jobs and salaries.

Palomar Health said the affected employees are immediately eligible for unemployment and would retain their health insurance throughout the 21-day period.

The announcement came just one week after Palomar Medical Center in Escondido was selected as the region’s FEMA field hospital to aid in the fight against COVID-19.

The fact that the hospital is adding services but laying off employees didn't sit well with many nurses 10News talked to at Monday’s protest. They believe colleagues in the operating rooms and other specialized units could easily be crosstrained to assist during the virus surge.

Mitra Khosroshahi has been a nurse for 44 years, including 35 years at the Poway facility. She told 10News she prepares patients for elective surgeries and was working last Tuesday when she was informed she was among those being laid off.

In a statement sent to 10News, Palomar Health referred to the workers' decision to protest as "disappointing” and said they had to make “unfortunate, temporary actions like many other businesses and hospitals across the country to balance our finances that have been affected by the pandemic.”

Palomar Health President and CEO Diane Hansen said, in part, that the layoffs were “not an easy decision” and this was a “very difficult time for everyone.”

“The health and well-being of all our employees is important to us and we expect to bring our Palomar Health family back to work as quickly as possible,” Hansen added.

“When there was fire going on, we worked double shift. When there’s an earthquake or anything happens, we work double shifts. Now I was wondering did they cut down the administration, the big shots or not, that's the question we have to ask,” said Khosroshahi.

Palomar Health officials said they will reassess the situation at the end of the 21-day period.