'It's not worth the BAD KARMA!': San Diego store owner hopes to get stolen Buddha statue back

SAN DIEGO (KGTV) -- A Hillcrest business owner is warning the person who stole a valuable statue from the front of her store that karma could catch up to them.

Tammy Packard owns TAP Lighting on 3690 Sixth Ave., and before she leaves every night, she makes sure to rub the Buddha statue that is stationed outside of her shop.

“On Valentine’s Day night, I went to do my routine, and it was missing,” Packard told 10News.

Packard was shocked that someone got away with the 24-inch jade statue that weighs 35-40 pounds.

According to Packard, the thief was last seen walking away on Pennsylvania Avenue towards Fifth Avenue.

In the days after the theft, Packard filed a report with San Diego police and gave them her surveillance footage. She also printed out posters to hang around the neighborhood that not only offered a reward but had a profound message.

Packard initially offered a $100 reward but then increased it to $300 with “no questions asked.” She also added this message to the posters: “It’s not worth a lifetime of BAD KARMA!” 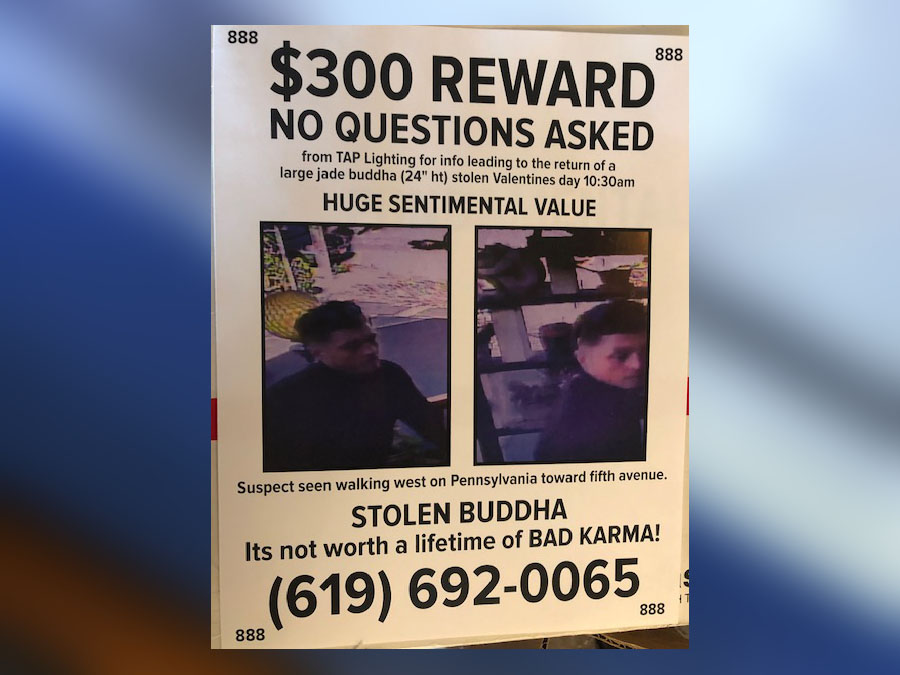 Packard told 10News she believes the theft of her statue was the work of a group.

“They knew where it was … When you walk in my store, walk up the steps, I have a fountain to the left and the Buddha is underneath it … it’s really tucked under, so my gut feeling is someone sent this person and said where exactly it was. The person was actually in the store for about 30 seconds,” Packard said.

“I was on the phone and my worker was helping someone else while the person picked it up and walked off. I think it’s really bold,” she added.

Both times, the sales were unsuccessful, presumably because the sellers may not have been satisfied with the money they were offered.

Until the statue is returned to her, Packard said she will continue doing what she can to spread the word.

Packard told 10News that the statue was cracked and repaired before, and she’s hoping that detail might spur someone who buys it to give it back to her.