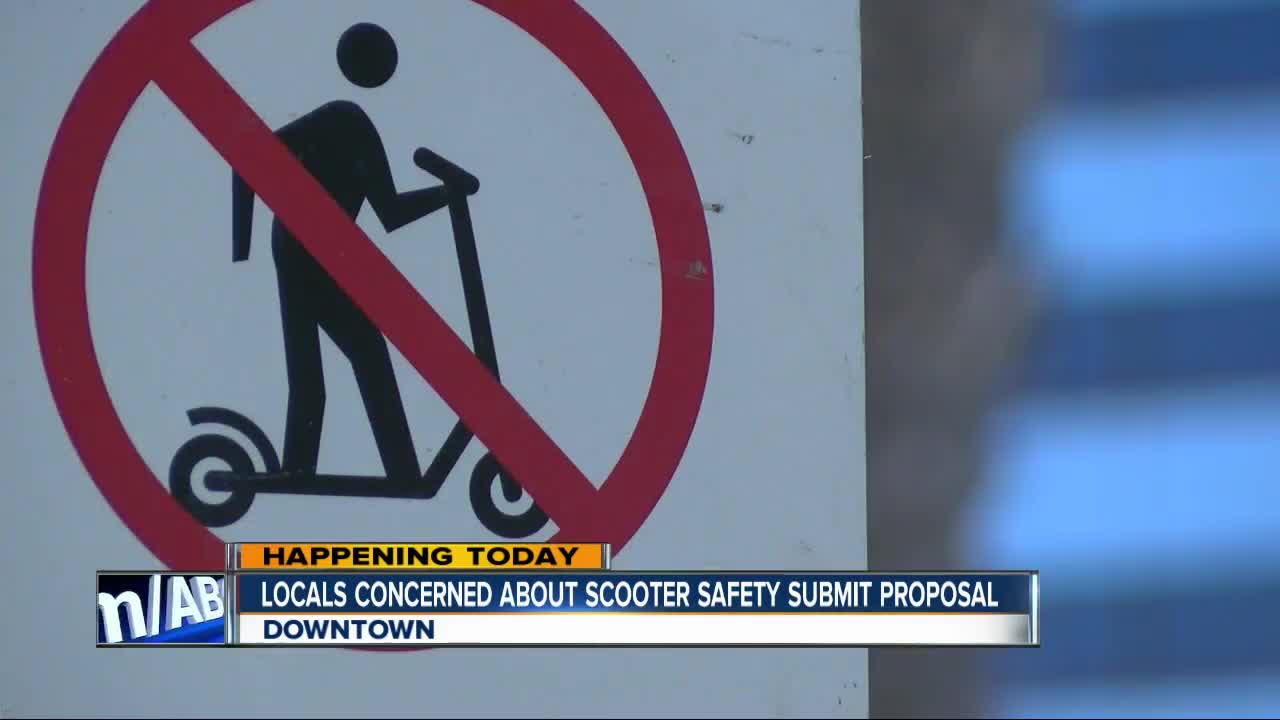 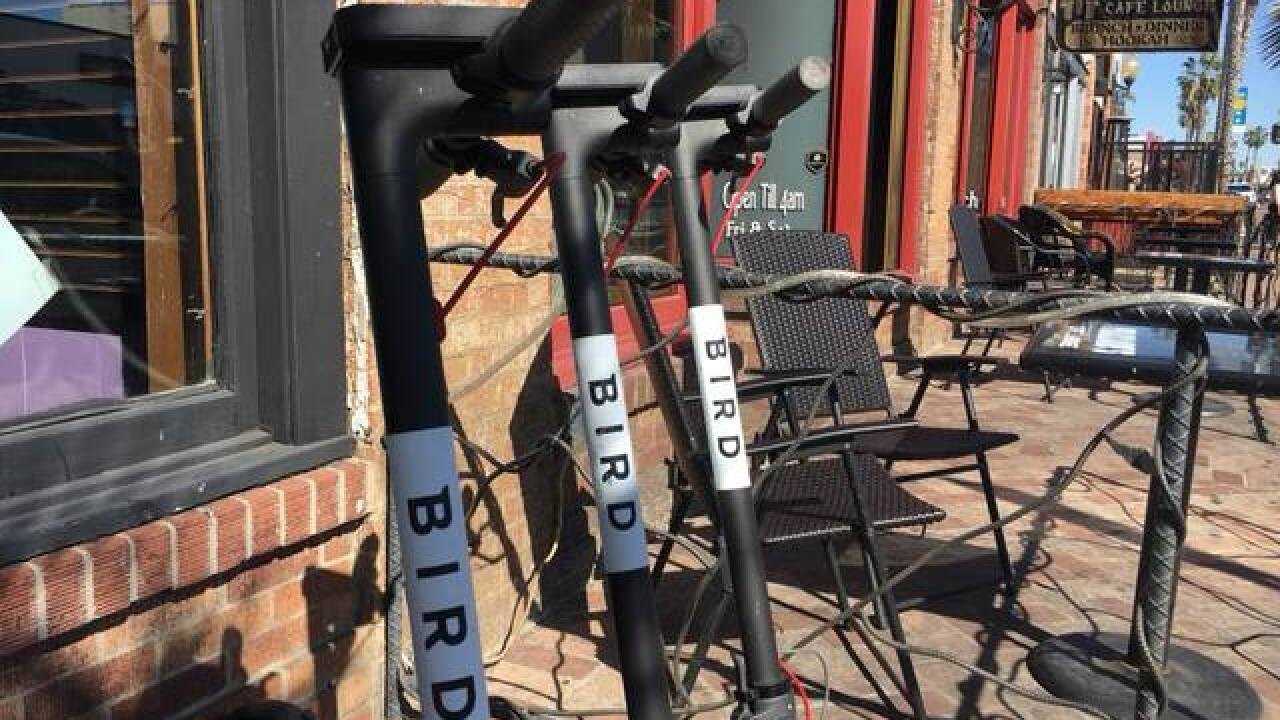 They’re asking for stricter enforcement when it comes to use of motorized scoots on sidewalks and walkways.

“It’s dangerous for the people who ride them,” said Dr. Jonathan Freeman, who submitted the proposals. “The riders try to avoid riding on the road, so they ride on sidewalks and walkways like this, and they put pedestrians in danger.”

Safe Walkways has launched its NOW campaign, which stands for “Not On Walkways”. The group is asking the city to require companies that own the scooters, and the riders to obey laws or face penalties.

They want companies to require scooter users to provide an image of a unique valid driver license to open a user account.

They say if terms aren’t met, they want the city to make sure the company loses its rights to operate in San Diego.

Freeman said walkers and people with disabilities have been greatly affected by the use of scooters on sidewalks and other walkways.

Right now, police can ticket people who ride scooters in banned areas, like sidewalks, but Freeman said that hasn’t stopped many people from doing it.

Other San Diegans say the scooters have helped tremendously when it comes to getting around town efficiently.

It’s unclear if the city will enforce new rules in response to the proposal.

Below is the list of proposals sent to the Mayor’s office by the group.

THE SAFE WALKWAYS PROPOSALS FOR TERMS TO BE INCLUDED IN THE CITY’S PROPOSED REVOCABLE PERMITTING AGREEMENT GOVERNING MOTORIZED SCOOTER RENTAL COMPANIES SUBMITTED TO THE MAYOR OF SAN DIEGO ON JANUARY 2ND. 2019.

The Mayor proposes that rental motorized vehicle companies sign a revocable permitting agreement setting out terms to be met.

• Failure to meet the terms must lead to permit revocation and loss of the company’s right to operate in San Diego.

• If the permit is revoked, the company shall remove their motorized vehicles, such as motorized scooters and motorized bicycles, or have them removed.

Placing motorized scooters on sidewalks contravenes multiple regulations and encourages users to drive on sidewalks. For pedestrian safety, motorized vehicles must not be placed on any walkways

We propose that the permitting agreement include the following requirements:

1. ONE DRIVER’S LICENSE, ONE CONTRACT, ONE MOTORIZED VEHICLE.

a. Companies shall require an image of a unique valid driver’s license to open a user account.

b. Only one account shall be associated with a unique driver’s license. The date of birth on the license shall be used to verify the user is at least eighteen, in order to sign a contract.

c. Companies shall not allow multiple motorized vehicles to be unlocked/rented using the same drivers license at the same time.

d. In order to unlock a scooter, renters shall acknowledge the following:

i. “I understand that allowing another person to ride a motorized vehicle using my account and drivers license is illegal.

ii. I understand that using my account and driver’s license to enable an underage person to drive a motorized vehicle is illegal and I could be charged with the crime of “child endangerment” and receive a felony conviction” California Penal Code 273a.

iii. I understand that allowing an underage person to stand on the platform of a motorized scooter or be carried while it is in motion is illegal and I could be charged with the crime of “child endangerment” and receive a felony conviction“ California Penal Code 273a.

2. INDEMNIFICATION OF PEDESTRIANS AND PROPERTY OWNERS.

b. The company shall carry liability insurance for renters of its vehicles.

3. PLACE MOTORIZED VEHICLES ONLY IN THE ROAD.

The company shall not place its vehicles on sidewalks or other walkways or allow them to be parked there.

4. USE MOTORIZED VEHICLES ONLY IN THE ROAD OR BIKE LANE.

a. The company shall inform renters not to operate its vehicles on sidewalks or any of the following:

b. The company shall use technology, as soon as it is available, to reduce its vehicles’ speed to zero on all walkways.

a. The company shall lose its permit if it fails to obey State or City laws.

b. The company shall permanently close the account of any user who fails to obey State or City laws while using its vehicle.

6. REPORTING NON-COMPLIANT USE OF MOTORIZED VEHICLES TO THE COMPANY WITH VERIFICATION BY THE CITY.

a. The company shall display a unique identifier, visible at a distance in daylight and after dark, on each of its vehicles.

b. The company shall provide a means for images showing misuse or misplacement of a uniquely identifiable vehicle to be reported immediately by the public to the company, with simultaneous notification sent to the City for verification.

c. Using this public reporting system, the company shall permanently close within 24 hours of receipt of the report the account of any user found to have failed to obey State or City laws while using its vehicle.

d. Each month the company shall report to the City the number of reports received and accounts closed.

7. COMPANIES TO COOPERATE WITH POLICE IN CRIMINAL INVESTIGATIONS.

In the event of a criminal investigation, such as a "Hit and Run" accident, the company agrees to provide contact information of the renter of its vehicle to the police, without a search warrant.