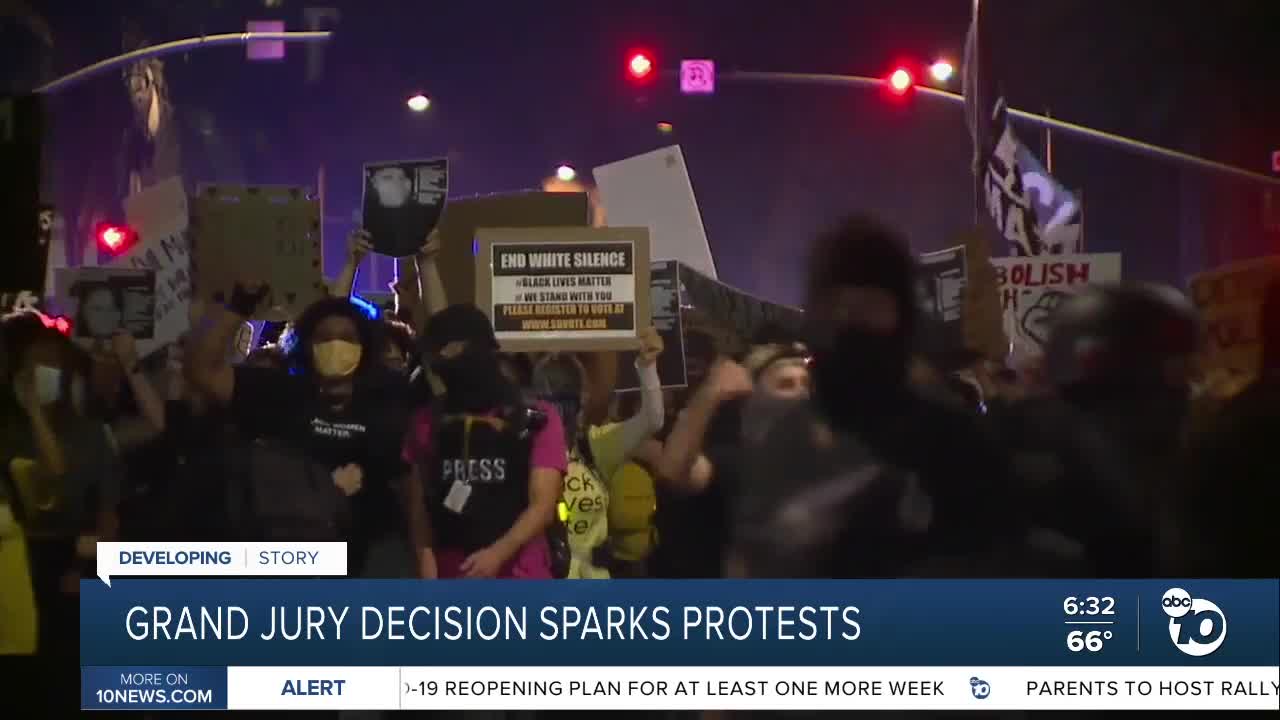 Hundreds took to the streets of downtown San Diego to protest the decision in the Breonna Taylor case.

SAN DIEGO (KGTV) – At least 10 people were arrested during demonstrations in downtown San Diego Wednesday night that were sparked by the grand jury decision in the Breonna Taylor case.

ABC 10News learned there were initially two separate protests planned in the downtown area. Eventually, the two groups joined together.

Protesters marched through downtown chanting and holding signs demanding justice for Taylor. The demonstration made its way to San Diego Police Department headquarters on Broadway.

Shortly after 10 p.m., SDPD tweeted that there were acts of violence and vandalism and declared the protest outside headquarters “an unlawful assembly.”

According to the tweet, the crowd was ordered to disperse or face arrest.

In response to acts of violence & vandalism, the protest in front of the SDPD Headquarters building (1401 Broadway) has now been declared an unlawful assembly.

Demonstrators are ordered to immediately disperse. If you do not do so you may be arrested. pic.twitter.com/coUlOTVZ6p

ABC 10News confirmed with police that at least 10 people were taken into custody during the protest, but officials did not disclose what charges the arrestees face.

Taylor, a 26-year-old emergency medical worker, was shot and killed by Louisville police officers during a botched drug raid on her home in March. The warrant used to search her home was connected to a suspect who did not live there, and no drugs were found inside.

A grand jury in Louisville on Wednesday decided that no officers will face charges for Taylor's death.

Prosecutors argued the two officers who fired at Taylor were justified in using force to protect themselves after they were shot at by Taylor's boyfriend.

The officer who fired the fatal shot and another officer who fired his weapon at Taylor face no charges, but former Louisville Metro Police Department Detective Brett Hankison was indicted with three counts of wanton endangerment for firing shots that went through Taylor's apartment and into an adjoining unit.