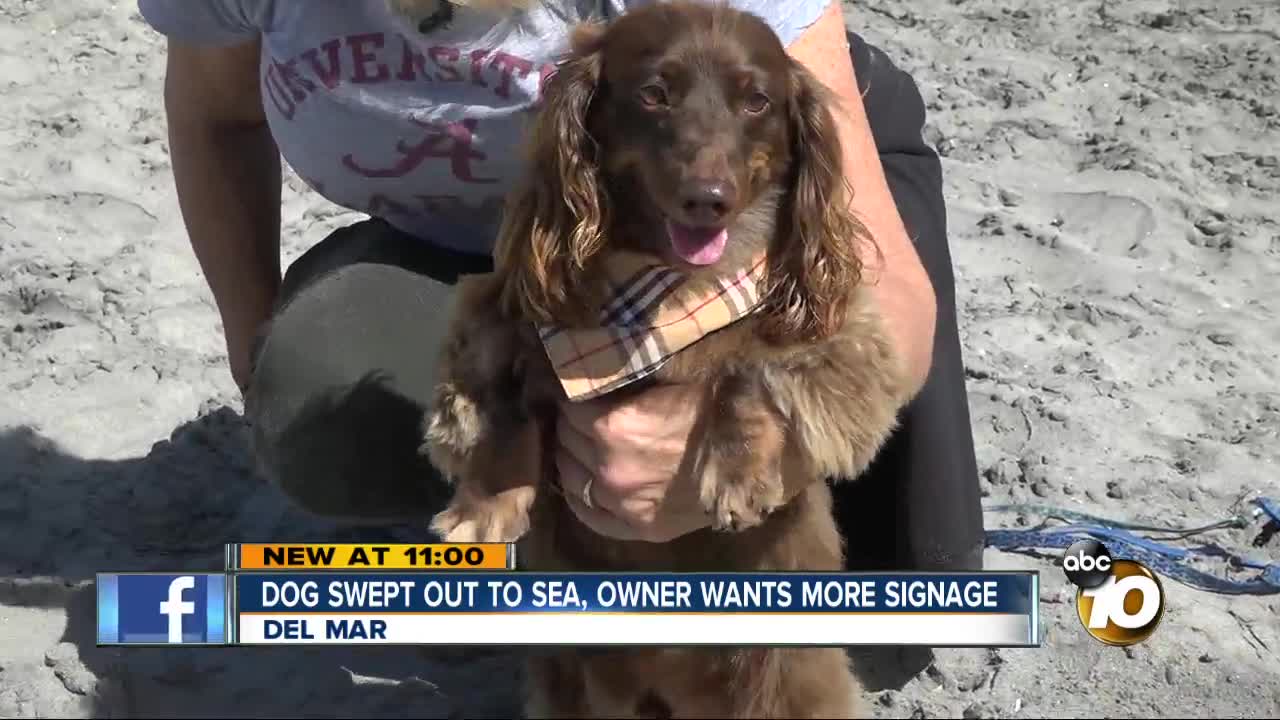 SAN DIEGO (KGTV) - A Del Mar woman wants lifeguards to put more signage up on Dog Beach that warns of riptides after her dog was dragged out to sea.

"As the tide goes up it fills up and as the tide goes out it flows out," Deputy Lifeguard Chief Lifeguard Mark Rathsam said, describing the movement of water between the San Dieguito Lagoon and the ocean.

"If you get caught in that you're gone," said Mark Waters, a long-time surfer and volunteer surf club coach at Westview High School.

On Wednesday, Joanne Goss took her 4-year-old Dachshund Hank and her rescued chocolate Labrador to the beach. A large dog started playing with her Lab as they were walking toward the ocean, steering clear of the fast flowing river below.

The owner of the big dog tried to get his dog's attention. "When he threw the ball, the Mastiff ran, the Lab ran and Hank ran," Goss said choking up.

Hank was ripped out to sea with the current.

Goss sprinted into the water, soaking her fanny pack with her phone inside. Waters saw the danger and took off.

"Threw off all my clothes except my shorts and just ran," he said.

He swam out into the fog hoping to find the dog, and hoping he wouldn't be too late.

"I thought I saw him get rolled over in a wave and then I heard the sound of a drowning animal," he paused, "that just pierced right into my bones and I was just like, 'Oh my god, I've got to hurry."

"He was the happiest dog on the planet when that happened. He jumped up on my chest and he's up in my arms, so I kept him on my chest," Waters said.

Hank was so excited he scratched Waters making him bleed.

Waters said he knew the "big fish" like sharks wouldn't be in the area for an hour or so, and then he started to look around to get oriented.

"I look back there's no shore, I looked in all directions, you can't see anything," said Waters.

He stayed calm and laid on his back, holding Hank out of the water. He said he looked at his watch and knowing the tide, he would ride it back in in the next couple hours.

Back on the beach, Goss felt sick to her stomach.

"We lost sight of Mark, and I thought Mark had died," Goss said.

She said she felt responsible.

A friend of Waters called lifeguards. The friend comforted Goss, reassuring her Waters would be OK. Finally, they saw the rescue team return with Waters and Hank.

Goss was overjoyed. She and Waters said they want more signage posted warning the public, especially visitors, of the dangers of the river.

10News asked lifeguards what could be done. They said there's eight signs posted north of the river and two on the south side. Rathsam explained they don't want to post "so much that people ignore it, because that's what ends up happening, and not so little that people can't see it. So we strategically place it where it's the most visible."

He also said with the huge change in the tide, it's nearly impossible to put more signage up without moving it by hand every few hours.

Waters and Goss hope that by at least telling their story, they can get the word out, so their close call prevents a tragedy.

"It really made me feel good to save the dog, it really did and um it was probably one of the best things I've done in a long time," Waters said.

Goss said she will be buying Hank a life jacket.