Did the Zodiac kill in Oceanside? Police re-test evidence in cold case 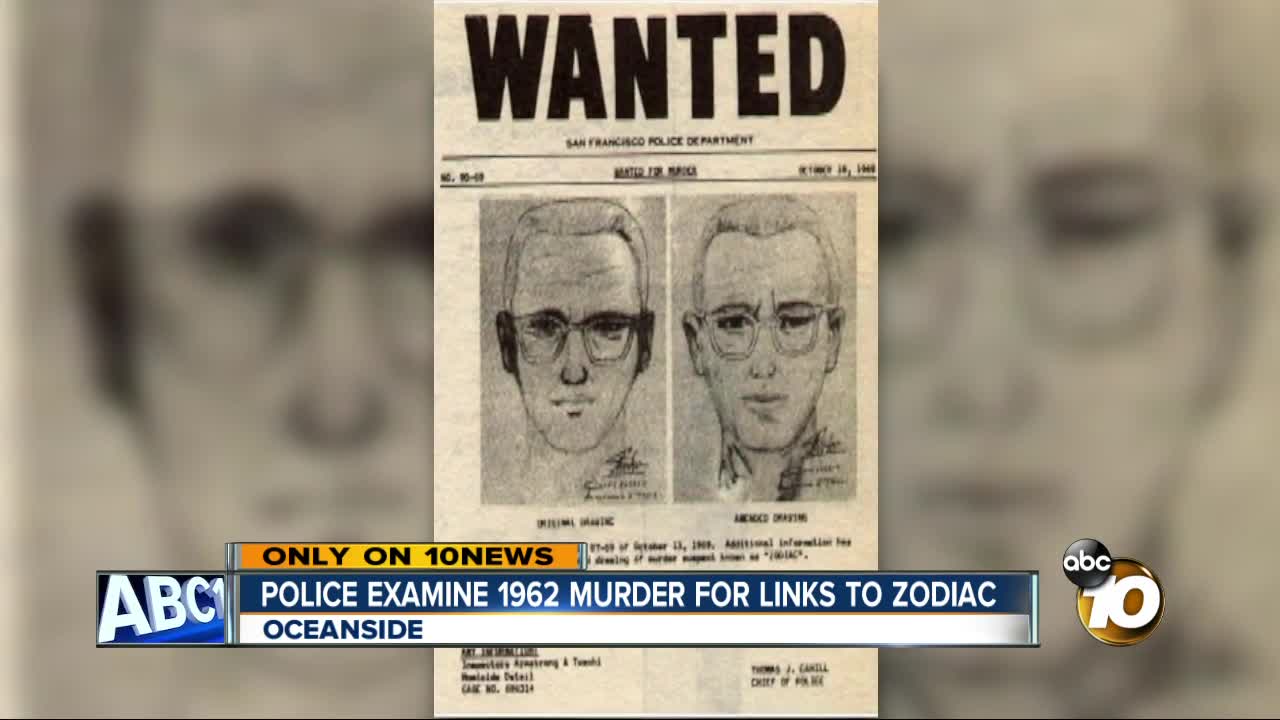 An Oceanside historian was scrolling through microfilm, researching the city’s most luxurious neighborhood, when she stumbled on something unexpected: a decades-old unsolved murder.

OCEANSIDE (KGTV) -- An Oceanside historian was scrolling through microfilm, researching the city’s most luxurious neighborhood, when she stumbled on something unexpected: a decades-old unsolved murder.

The more Kristi Hawthorne examined the 1962 shooting of a cab driver and the cryptic phone threats surrounding it, the more similarities she noticed to arguably the most infamous unsolved serial killing case in American history.

A question began to nag Hawthorne: Did the Zodiac killer claim his first victim in Oceanside?

She brought the case to the Oceanside Police Department’s attention. Last month, the department’s cold case unit submitted ballistics and fingerprint evidence for re-analysis through modern forensic databases for the first time.

Although a crime lab determined no further testing was possible on the nearly 58-year-old ballistics, OPD is still waiting for the results of the fingerprint analysis, said Cold Case Investigator Sylvia O’Brien.

Still, O’Brien said there were enough similarities to the Zodiac case to warrant follow-up, and she was in the process of reaching out to the appropriate agencies.

The Zodiac terrorized Northern California in the late 60s and early 70s with at least five confirmed murders, taunting messages to newspapers written in cyphers, and phone calls to police. In one letter, the Zodiac claimed to have 37 victims.

The Oceanside case is a long way from being conclusively linked to the infamous serial killer, but the 1962 shooting of Ray Davis has quickly enthralled some of the amateur sleuths that closely study the Zodiac.

“When you compare the really unusual similarities between the killer of Ray Davis and the Zodiac, you get these really bizarre, rarely seen characteristics,” said Tom Voigt, creator of zodiackiller.com.

“I think it’s the same guy doing all the killings,” he said.

And there’s a chance, Voigt said, the Zodiac is still alive today.

The killing of Ray Davis

Hawthorne, the president of the Oceanside Historical Society, became so hooked by the Ray Davis murder that she spent two years researching the case.

According to her research, on April 10, 1962, a 29-year-old taxi driver named Ray Davis radioed his cab dispatcher that he was taking a fare to South Oceanside. The radio call from the recent Michigan transplant came in at 11:10 p.m.

The next day, a police officer found Davis’ body dumped in an alley near some of Oceanside’s most influential -- directly behind the homes of the city’s current and former mayors.

The body was found in the St. Malo neighborhood, an enclave for Southern California’s rich and famous that continues to be the city’s most upscale community, Hawthorne said.

Police concluded Davis had been shot by his last passenger, once in the back through the driver’s seat and once in the head.

“Ray Davis was not robbed. He was simply murdered, seemingly for sport,” Hawthorne said.

Investigators later revealed that the previous day, an unidentified caller had phoned Oceanside Police with a threat: “I am going to pull something here in Oceanside and you will never be able to figure it out.”

Days later, before the mysterious call had been reported publicly, there was a second call to Oceanside police that prompted authorities to take unprecedented safety measures, Hawthorne said.

According to the city’s police chief, the caller stated, “Do you remember me calling you last week and telling you that I was going to pull a real baffling crime? I killed the cab driver and I am going to get me a bus driver next.”

In the small town of Oceanside, with a population in that era of less than 25,000, police put armed guards on city buses and armed military police on buses heading to Camp Pendleton.

“Nothing like this ever would have happened in the history of Oceanside,” Hawthorne said. “It was quite terrifying to the residents.”

Similarities to the Zodiac

Hawthorne presented her findings to Voigt, a prominent figure in the amateur Zodiac community who has been featured in several documentaries.

The Zodiac “had training somewhere to be a serial killer. And I do believe it was in Southern California and he worked his way north,” Voigt said in an interview.

In a blog post detailing the similarities, he said both cases involved attacks on cab drivers in wealthy neighborhoods, threats against buses, and cryptic messages expressly aimed at baffling investigators.

Both killers took the highly unusual step of reporting their own crimes to police and warning of future attacks, he said.

“The Zodiac wanted to leave the biggest trace he could,” he said. “And that’s exactly what the killer of Ray Davis did.”

Davis was killed with a .22 caliber gun with long rifle ammunition, the same type of gun and ammunition used in the first confirmed Bay Area Zodiac case less than 7 years later, Voigt said.

Voigt said there are several unsolved killings in Southern California that he considers candidates for the Zodiac, but the Ray Davis murder would be the earliest.

There’s already some evidence the Zodiac may have operated in Southern California. Someone claiming to be the Zodiac took credit for the 1966 murder of Cheri Jo Bates in Riverside County. Based on several other letters, investigators at the time linked the attack to the Zodiac.

While Voigt considers the Southern California killing a settled Zodiac case, others have disputed the link.

Then there’s the famous Zodiac composite sketch where the suspect has a crew cut.

“Some folks believe he might have been in the military. Would he have been stationed here at Camp Pendleton, committed the murder, then to Riverside and then up north?” Hawthorne said.

“I’m not saying it’s the Zodiac, I’m just saying there are enough compelling similarities to consider,” she said.