COVID-19 testing in San Diego County expected to ramp up 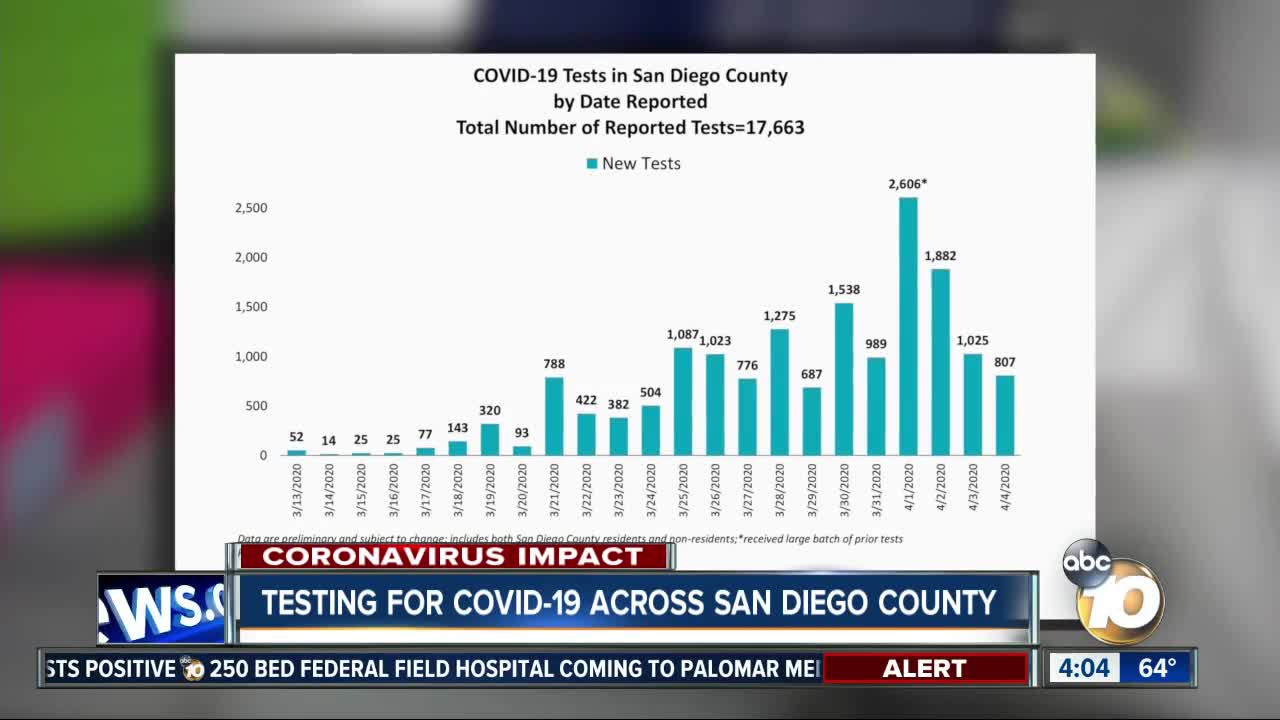 Although the tests were reported on certain dates, that doesn't mean they were given on those days, according to a county spokesman.

The county requires all testing to be reported, regardless of the results.

"Right now we’re testing around 300, on the upper end about 400 people a day," said Dr. David Pride, the associate director for the
Clinical Microbiological Laboratory at UC San Diego Health. "We have been slowly increasing our testing over the course of the past several weeks."

Pride said right now they have the capacity to tests about 700 people a day. But the demand is not meeting the capacity for one specific reason.

"We’re restricting testing mostly to symptomatic patients," he explained. "We realize there’s a lot of people that are asymptomatic right now who would like to be tested and they don’t qualify for testing at our institution right now."

The county has asked for labs across San Diego County to prioritize testing for people who show symptoms or are in the high risk categories.

Pride said in pretty soon he expects testing to ramp up.

"We have developed our tests to sort of be able to respond to the myriad of different specimens that are out there in the community," he said.

Results are typically back within 12 hours.

Recently, California Governor Gavin Newsom announced that the state is teaming up with UC San Diego and UC Davis to increase access to coronavirus testing.

Sharp Healthcare tells 10News it can currently give about 300 tests a day with the equipment and materials it currently has available.

Rady Children's Hospital said it can currently give about 100 tests a day but expects that number to increase this week.

Eldahmy Wellness Pharmacy in La Jolla and Barrio Logan has started providing people with a different type of test with results in 10 to 15 minutes.

The tests detect if a patients blood contains coronavirus antibodies.

Eldahmy received a shipment of a little less than 100 tests and expects the next shipment to arrive soon.

The kits are allowed by the FDA for Emergency Use Authorization (EUA) as of March 31, 2020.

"By increasing the scale of testing I believe it helps us as a community," said Ahmed Eldahmy, an advanced practice pharmacist and owner of Eldahmy Wellness Pharmacy.

He recently began giving about -- tests a day on a first come, first served, appointment only basis.

"Some were positive, some were negative," he said.

People must wait after they believe they were exposed to get tested.

"If you were exposed yesterday it’s not going to do any good for you. You have to wait 10 to 13 days," he explained.

Eldahmy is administering the tests himself outside of both of his locations.

"I stay six feet away from them, they pull over in front of the pharmacy, they pull down their window, I give them explicit or very detailed instructions on how to take the test," he said. "You poke your finger, you get a good drop of blood and you place it on the strip."

Results show up in just 10 to 15 minutes and the patient is notified via email.

"10 to 15 minutes is more than enough to know if they have antibodies in their blood for that virus of not," he said.

If they test positive, they are given further instructions on what to do next.

If they test negative but still have symptoms, they can reschedule to get tested again at a later date.

People can fill out a questionnaire here to see if they qualify to be tested at his pharmacies.

The county suggest that people who have symptoms and believe they may have COVID-19 to contact their primary care physician or call 211.