Getting to know the man behind a head-turning van 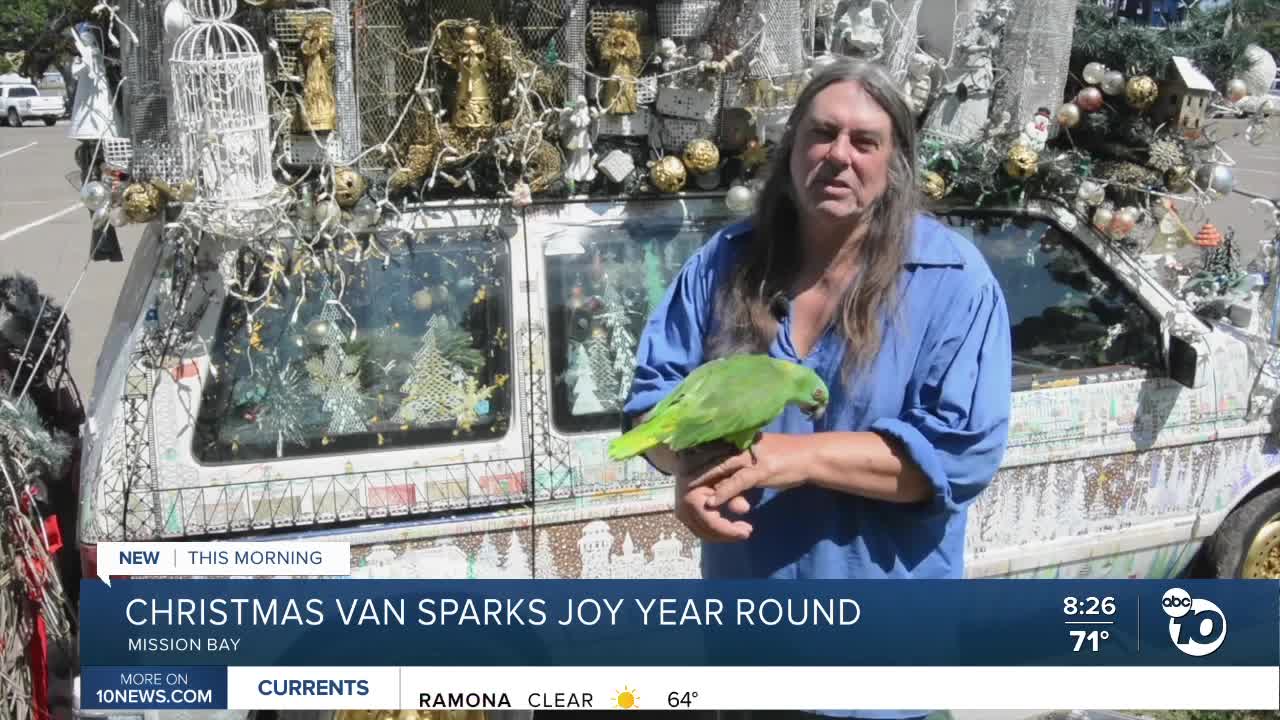 It's not unusual to collect Christmas decorations year-round, but using them to cover every inch of a late model Dodge Caravan is pretty unique.

SAN DIEGO (KGTV) -- It's not unusual to collect Christmas decorations year-round, but using them to cover every inch of a late model Dodge Caravan is pretty unique.

He's known to many as the "Christmas Man of San Diego," whose van conversion continues to turn heads and spark smiles — no matter the season or social distance.

"He's a trans-dimensional emperor of over a google-plex of universes," said Larry Bogaert, as he stands with his pet parrot, Emerald Eagle, on his forearm. "I'm his Prime Minister and his daddy."

In his mid-60s, Bogaert is a man with a big imagination who loves to share tales, turning his late-model Dodge Caravan into a storytelling canvas.

Almost every square inch of his vehicle features his own hand-drawn depictions of famed children's stories, mostly from English literature.

"And then I have Fezziwig's warehouse here," Bogaert says, pointing to various images on the car. "If you remember Scrooge did his apprenticeship at Fezziwig's."

"For some things, I have a plan in mind, but other things as I buy things or acquire things you think, Oh, I can use that on the castle," Bogaert says, pointing to the roof of the vehicle which is covered by a towering display of church-like spires and angels. The hood is plastered with its own 3-D display of a miniature snow-covered town. And the sides of the van are covered in paint pen drawings all by his hand.

The vehicle is a head turner and as we talk to Bogaert a couple of bicyclists stop to take pictures.

Though, Bogaert admits there have been a few tickets over the years concerning visibility issues. But the former bus driver insists he's very good at using his side mirrors. Besides that, his inspiring creation has proven a good defense.

"One time the judge threw it out of court because she said her kids loved my car. She said case dismissed," he recalls.

Another woman stops by on foot, "I like it. I think it's a positive message and we certainly need that now more than ever."

Uncertain times for many, and Bogaert can relate to the feeling.

Underneath a kaleidoscope of ornaments inside the van, there is a snug space, where Bogaert sleeps, as — for the moment — this is his home.

"I bought a grocery store up in Crescent City. I always wanted to live in the redwoods," Bogaert said.

He says that business venture years ago didn't go as planned, and the financial ramifications remain. But he doesn't dwell, as he focuses attention on another part of the van.

After all, he and Emerald Eagle have a "google-plex of universes" to run. And they are, apparently, ever-expanding.

"I am adding more towers and a few more parts to it. I have some stuff inside that will go on in the next week or few days," said Bogaert.