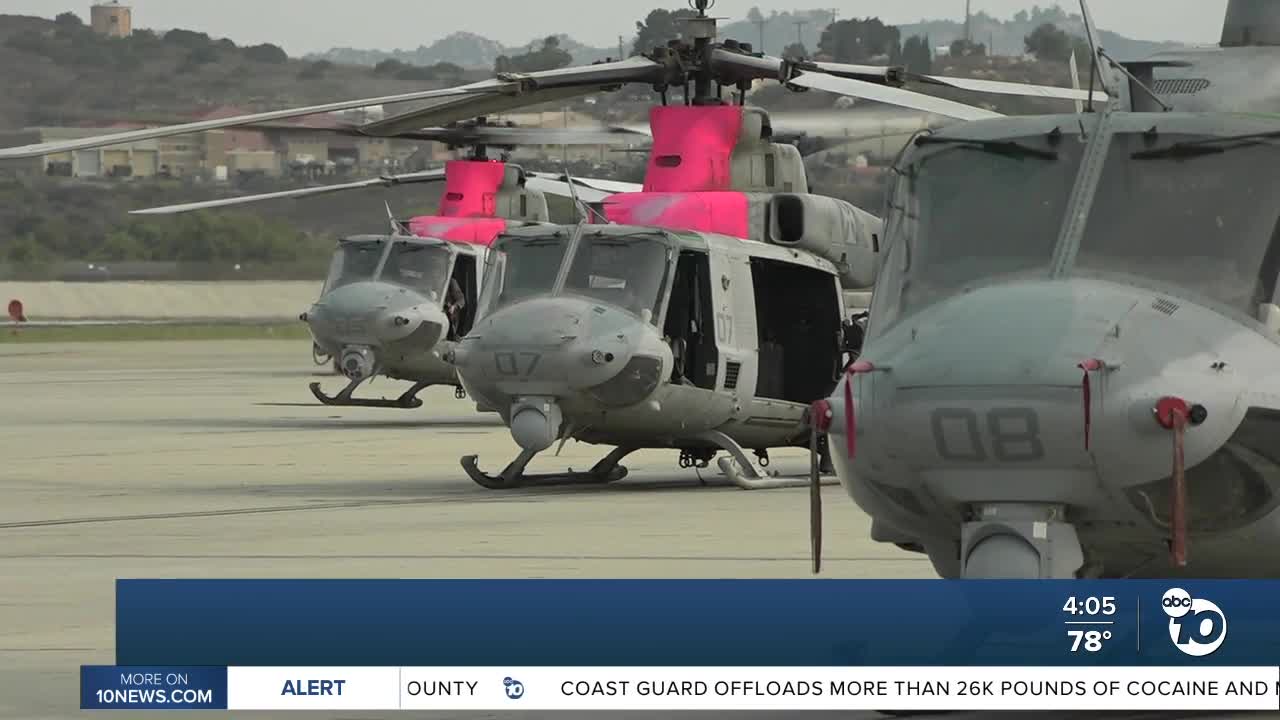 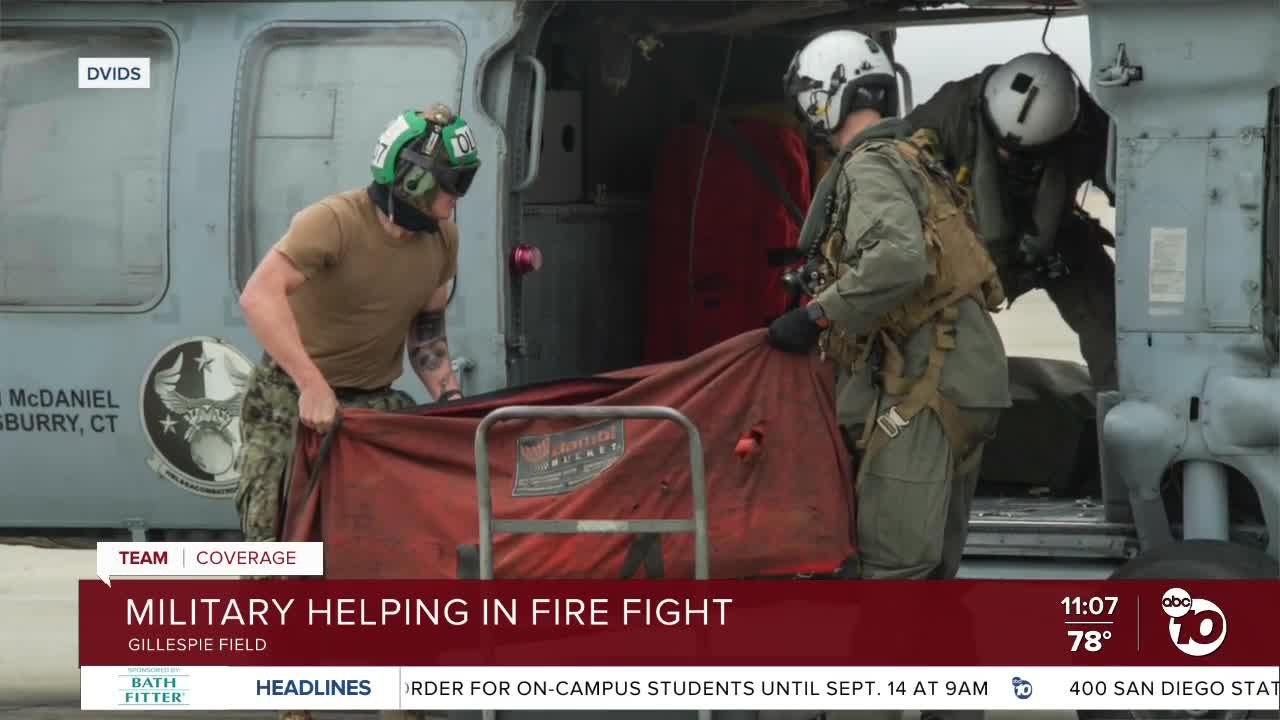 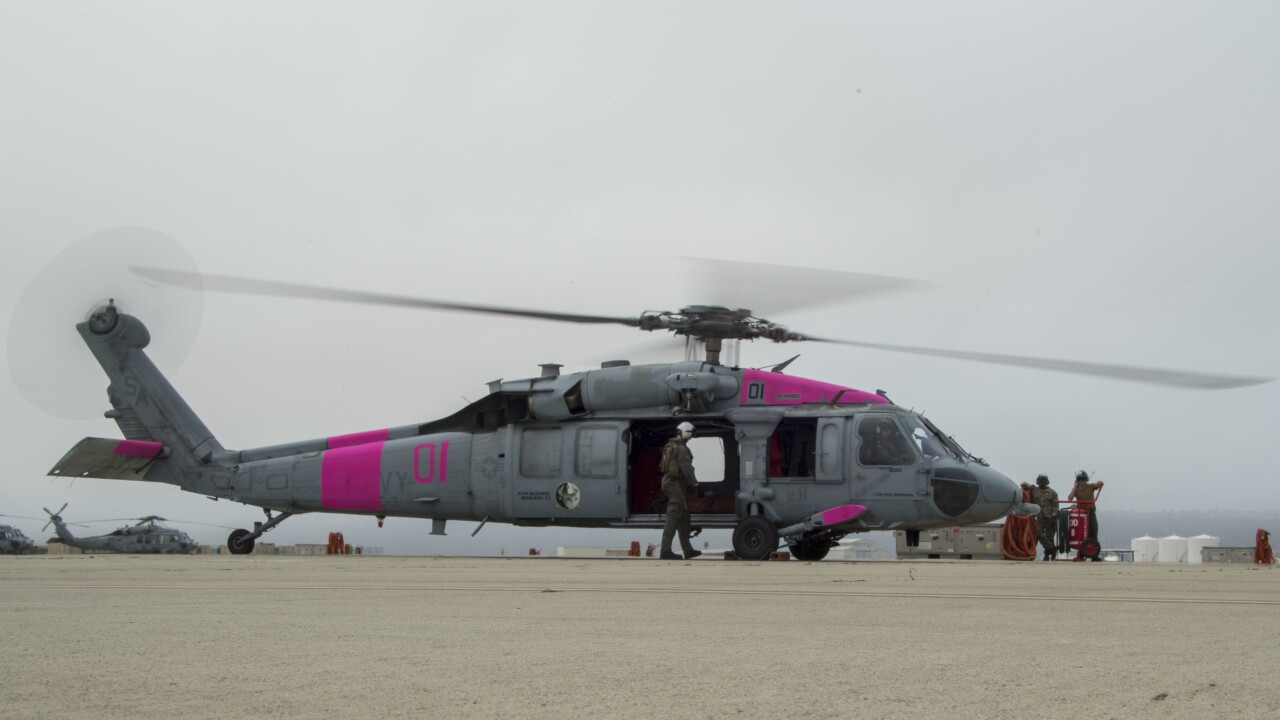 "Due to the increased fire activity throughout the state of California up to and including Southern California, we are extremely short on resources, private, state, and federal resources. So we've enacted our emergency response agreement with the military here in San Diego including the Navy out of North Island and the Marine Corps out of Camp Pendleton and Miramar," Cal Fire Capt. Nick Clements said.

San Diego County said the Cedar and Witch Creek/Guejito Fires were a "wake up call" and in 2008 created a new emergency operation plan partnering with the military as an added resource in a firefight.

The 3rd Marine Aircraft Wing has 6 choppers on standby at Camp Pendleton. They got the call Sunday night and 12 hours later they were coordinating with CAL FIRE.

"I knew it was a possibility but I didn't expect to go do it," Crew Chief Cpl. Michael Sennett said.

They dropped 1,500 gallons of water on Monday, according to the Wing.

"It's cool because they use the same kinds of equipment we do so we're able to get tips and tricks from them."

Sennett said they're used to flying low and carrying loads, from troops, to weapons, to any other resource.

This week their load was water, which can be tricky, he says, "sometimes we miss and it's like okay let's make a correction and adjust and we can hit it next time."

Sennett said it's not the wind that makes the timing difficult, it's judging the motion of the Huey.

He said Crew Chiefs coordinate critical parts of the mission. They lay on the floor of the chopper and watch the bucket fill with water, then call for the drop, when they're near the assigned target.

"It's definitely been a long couple days because from start-up to shut down, we come in at six, we have to land by 18[00] so it's a 12-hour day usually," Sennett said.

Those long days paying off as the containment of the Valley Fire jumped from 1% - 32%.

"It feels invigorating to go out and do something that has a positive impact on the people around us. So much of Southern California supports what we do here and so it's good to give back to the local community," Pilot John Findley said.

The crews flying out of Pendleton have years of training to qualify for this mission. It takes hundreds of hours of maintenance to keep the helicopters running during these missions.

Thursday, the fire had burned about 17,565 acres and was 32% contained. The fire has destroyed 20 "habitable structures" and 17 "minor structures" and resulted in two injuries, though it was not clear if the victims were firefighters or civilians.