Asylum seekers waiting in Mexico arrive for hearings in US 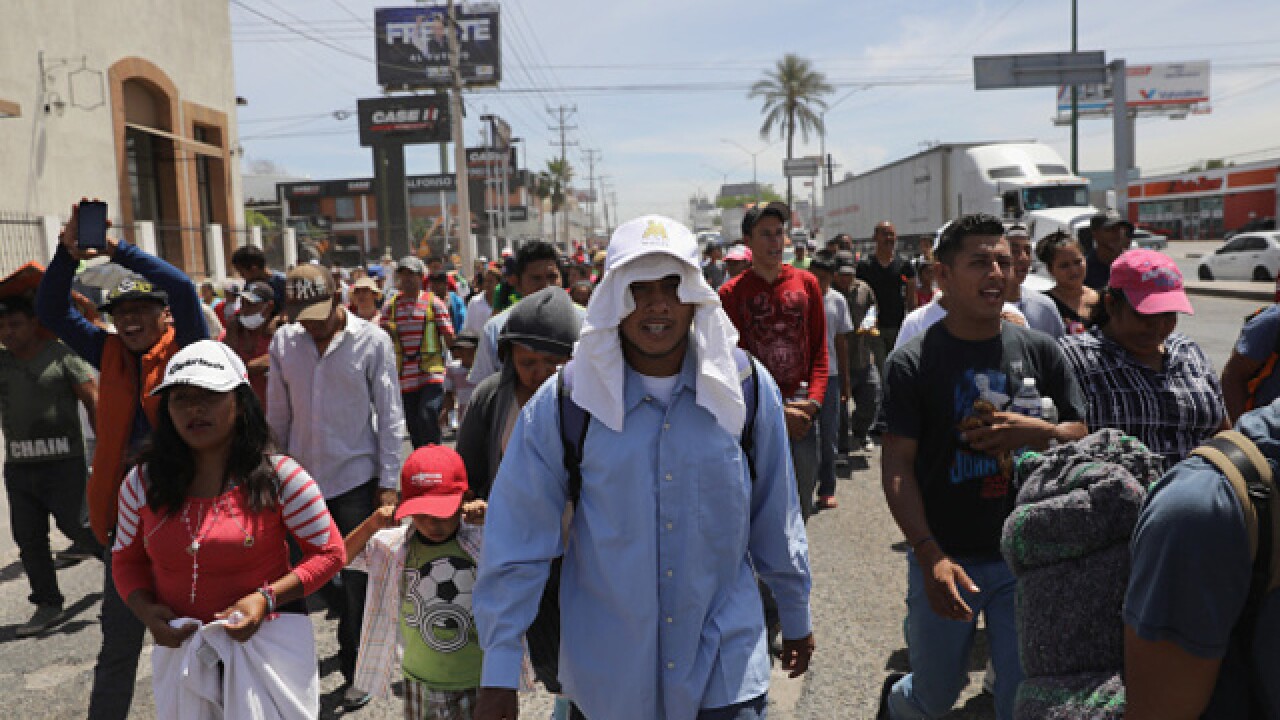 Copyright 2018 Scripps Media, Inc. All rights reserved. This material may not be published, broadcast, rewritten, or redistributed.
John Moore
HERMOSILLO, MEXICO - APRIL 23: Central American immigrants, part of an immigrant "caravan," march in protest against U.S. President Donald Trump on April 23, 2018 in Hermosillo, Mexico. They demonstrated against Trump's morning tweets calling for U.S. Homeland Security to stop them from crossing the border into the United States to request political asylum. More than 500 immigrants, the remnants of a caravan of Central Americans that began their journey north almost a month ago, is within days of reaching their destination in Tijuana, which borders San Diego. Traveling together, many atop freight trains known as the "beast," or in buses, they have sought safety in numbers on the dangerous journey. Along the way, they have received an outpouring of help from local charities, the Mexican Red Cross, private citizens and government officials. President Trump sent National Guard troops to U.S. border regions in response to the caravan weeks before, although many in the group are families who plan to seek political asylum the U.S. (Photo by John Moore/Getty Images)

Six migrants from Honduras and one from Guatemala were scheduled to appear for their first hearing. The group is among roughly 240 people waiting in shelters in Tijuana under President Trump's new policy.

She met with her clients Tuesday morning after they crossed into the United States at the San Ysidro Port of Entry.

"One of my clients is a leader in his church. I think he relies on his faith. He brought us all together to pray before they presented at the port, which was a very touching moment," said Barnard.

The judge granted her motion to allow her clients to be interviewed by the Department of Homeland Security Officials before being returned to the shelter in Mexico. She said they fear for their lives there.

"That's because one, they are asylum seekers, they're not Mexican nationals, they don't feel like they would be able to go seek protection from authorities because they are seen as migrants and foreigners," said Barnard.

Barnard said her clients have family in the United States ready to accept them while their claims are processed.

"They've received verbal slurs for being migrants in Mexico. They are staying in a shelter because they can't afford to pay for housing. They don't have any right to work in Mexico, and the shelter has started receiving threats as a result of sheltering these asylum seekers," said Barnard.

Barnard said her clients were supposed to meet with DHS at the Port of Entry in San Ysidro sometime Tuesday, but as of five p.m she had not received an update on their status.

Their next immigration hearing in San Diego is scheduled for August 6th.

"They've got eyes wide open about the process, and they're hopeful that they will have their chance to be here in the United States while they fight their case."