Life in Carlsbad: From Bohemian town to desalinization leader

City was once renown for its mineral water 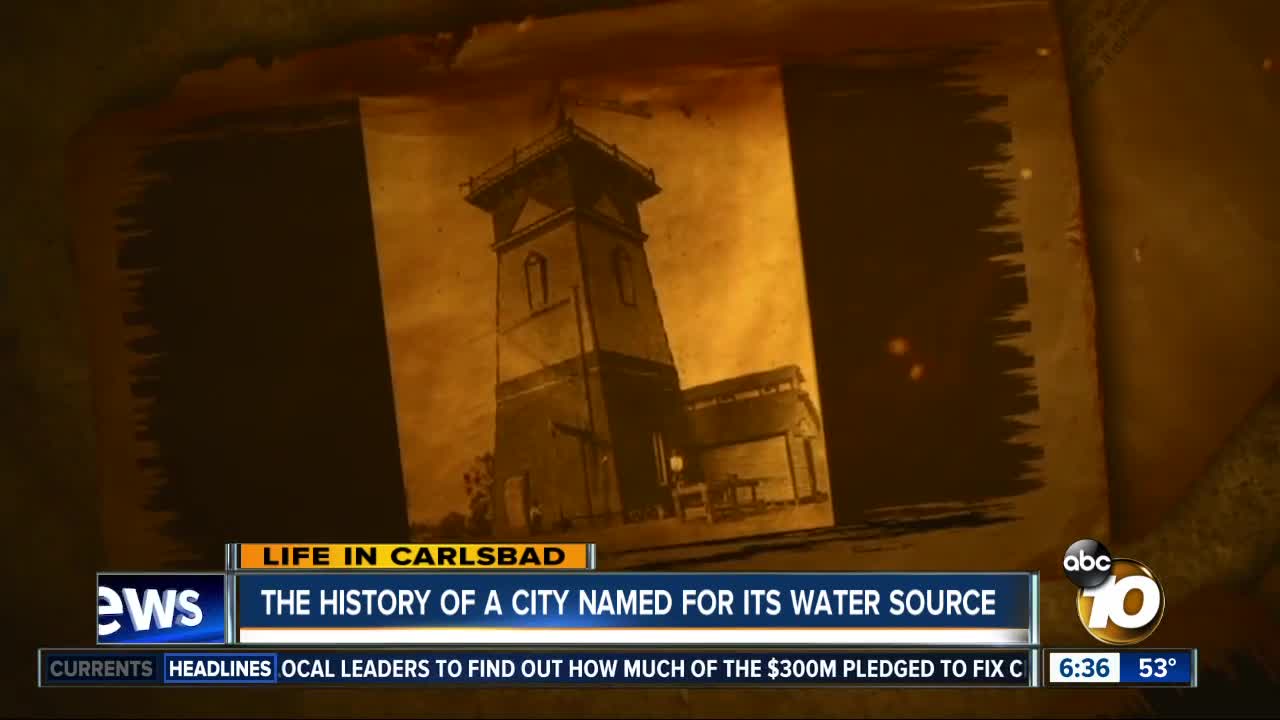 Carlsbad was born around an Artesian spring that reminded the founders of another water source in Karlsbad, Bohemia.

“When we got here it was a beach community," said Susan Gutierrez as she and her husband, German, walked with me toward the entrance of the Shipley-Magee house; a turn-of-century cottage at Beech and Carlsbad blvds, among the first in the area to take advantage of building materials delivered by train.

“The trains came through in the mid-1880s, about 1883," Said gutierrez, "And that enabled people to start building wood structures. Prior to that the ranch houses were primarily made out of adobe.”

Gutierrez is president of the Carlsbad Historical Society which now resides in the Shipley-Magee house; named for Florence Shipley who bequeathed it to the city in 1974.

“We had one family who lived here from the 1890s to the mid-1970s," said Gutierrez referring to the Shipleys as she toured me through the home, "So we feel free to interpret a broad time period.”

The house is now a time capsule of personal treasures documenting the history of Carlsbad back to the 1880s, when four investors (the town founders), bought up 400 acres of open land that included a prized a well dug by local farmer, Captain John A. Frazier.

"You have to go through a lot of soil, rock, clay to sink well," said Gutierrez, noting the difficulty of the work. Frazier dug down some 500 feet before discovering two Artesian springs containing alkaline water of such quality, word spread they even had healing powers. The springs also reminded the founders of another world renown water source in eastern Europe.

"They chose that name Carlsbad based on water that was found close to the train tracks," said Gutierrez, "It had similar properties to Karlsbad, spelled with a 'K,' in what is now Czechoslovakia."

In the 1880s Carlsbad, California grew in fame with its own water source, spurring construction of a hotel and spa. But Gutierrez said the dream nearly dried up with years of drought. "From 1890 to 1906 we're pretty much dead in the water - so to speak!"

While many moved out during the drought years, Susan said that's when the Shipley family moved in.

"This was in part because Mr. Shipley had very fragile health and he wanted to live in a place that was beneficial for his health."

And Gutierrez said it must have worked, as Mr. Shipley lived into his 80s. The family home remains a near living tribute, furnished as it might have been when the Shipley family was there.

“She actually wore the clothing that we're looking at here?” I asked, looking at one dress on display. “Yes," said Gutierrez, "All of these are Florence's items.”

Intricate sewing projects and hand written family letters among the heirlooms. The penmanship artful. The subject matter -at least for the letter we perused, practical, as Florence wrote her mother about the need for new driving gloves. Perhaps to drive a one horse buggy in the backyard barn shown to me by Susan's husband, German. Also in the barn a humorous looking bird about five feet tall.

The creation was actually one of the "Twin chickens" that used to adorn the entrance to the nearby Twin Inns restaurant; run by the Ketner family from 1919 to the mid 1980s. A registry from the business -that's on display in the main house- speaks to its fame. The book left open to a page with the signatures of Groucho Marx, Joan Crawford and Clark Gable.

While carlsbad has a notable history back to the 1880s, it didn't actual become a city until 1952.

"Our chamber of commerce had always been very strong," said Susan. "And when the county didn't do things for us before we were a city, the chamber provided for that."

But she explained that the need for better fire protection and more water eventually convinced the community to incorporate.

"They knew that in order to grow they had to be able to float bonds to connect to the new Colorado River water."

And today the story of Carlsbad continues to be closely tied to water, as the city's desalination plant provides millions of gallons for the entire region everyday.

The Carlsbad Historical Society at the Shipley-Magee House has much more to tell about the history of Carlsbad and this part of California. You can see it for yourself every Friday through Sunday. Donations are welcome.