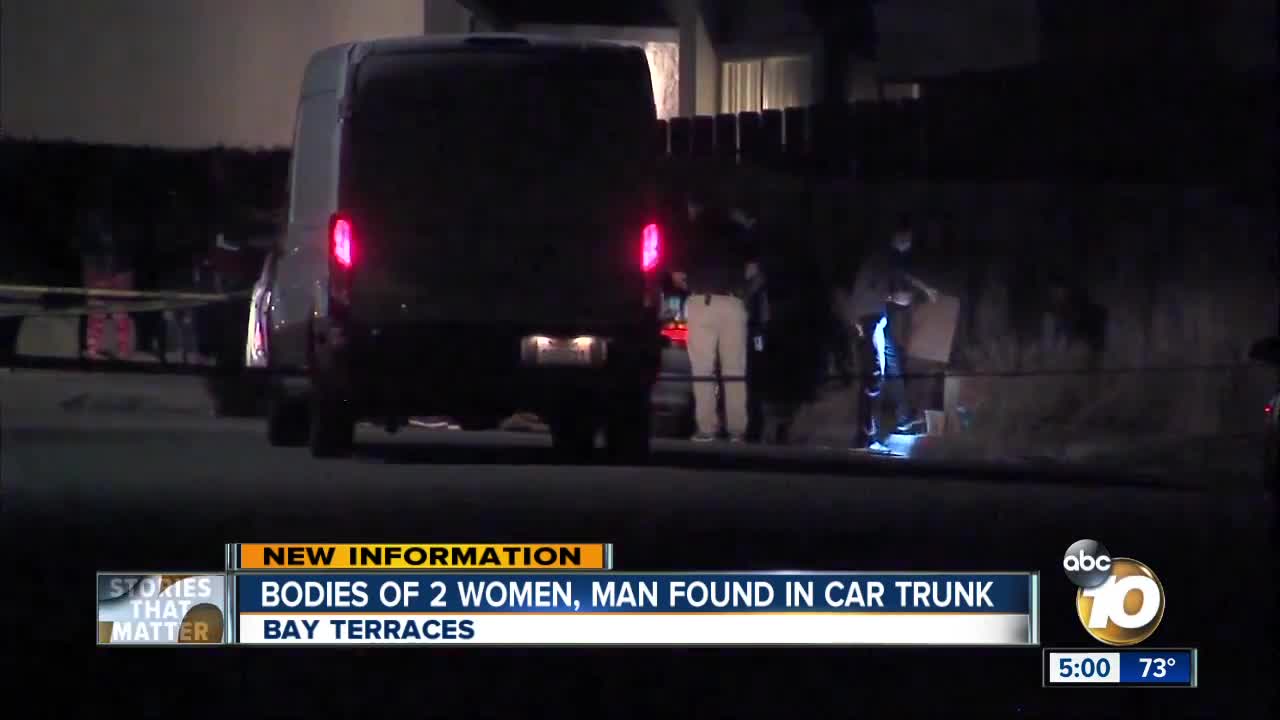 SAN DIEGO (KGTV) San Diego Police are investigating the discovery of three bodies found in the trunk of a parked car in Bay Terraces.

Police found the bodies in a car parked on Jaime Avenue at Doti Point Drive after a neighbor reported a suspicious vehicle just before five pm Sunday.

According to police, the bodies are that of two women and a man, possibly in their late teens or early twenties. They say the bodies were in such poor condition. They were unable to determine race.

The medical examiner is working to determine the cause of death and their identities.

Neighbors say the car was parked on the street for three days, but that's not uncommon.

“A lot of people will park and they will walk to those apartments behind here or they park and they go to someone’s house over here, so it’s not really that suspicious," said Kevin Totten.

Totten grew up in the neighborhood. He said it's usually quiet and is home to mainly families.

"It seems like someone did what they did, to these three innocent people and drove around and was looking for a spot to dump a car with three bodies in it," said Totten.

After neighbors started noticing an odor, one of them called police Sunday evening.

"Once the wind would kind of blow, you can smell like, it’s hard to explain. I’ve never smelled that before. I thought well maybe it was like trash, but then a more pungent odor than that," said one mom who didn't want to be identified.

The woman said once police arrived she noticed fluids coming from the car.

"Once the police were here and they were kind of looking to see what was going on you could see the car and what looked like blood dripping from it. I’m like do I need counseling? Do my kids need counseling? It’s a lot to take in,” said the woman.

Police aren't releasing any information about the investigation. Neighbors say the car was an older model BMW either silver or gray in color. They also said it had out of state plates.

"Whomever the victims are, the families, hopefully they can figure who they are and sort of bring closure to them," said the woman.