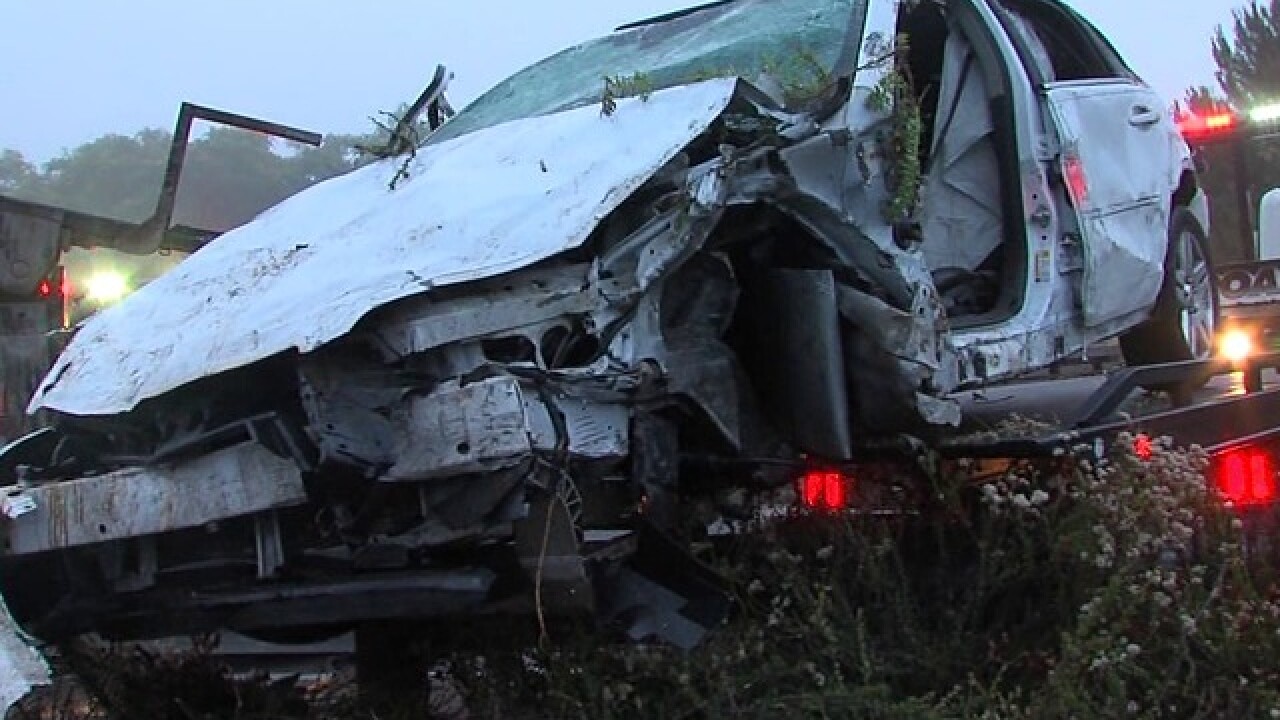 By: Allison Ash
Posted at 11:53 AM, Feb 25, 2016
SAN DIEGO – Team 10 has uncovered a lawsuit  filed in San Diego County Superior Court that claims a man was badly injured when he was impaled by a guardrail in San Marcos.
The suit, filed by 26-year old Andy Weidemann, claims the guardrail was defective and the manufacturer, the City of San Marcos and other government entities knew or should have known it could cause injuries.
Weidemann spent most of his life involved in sports. He played football all four years of high school. He played softball in an "old man's" league. He went water-skiing, snowboarding, anything to enjoy outdoor exercise. That was until last summer when Weidemann was involved in a horrific crash.

It happened on Twin Oaks Valley Road, near Cal State San Marcos. Weidemann recently graduated and had been out celebrating with friends. It was 2 a.m. on June 22, 2015.

"I woke up and I was down an embankment and I looked down and I saw that my legs were pretty much mutilated. My right leg, the calf, was pretty much hanging off the bone and there was a lot of blood," said Weidemann.

A length of guardrail sliced through the front end of his car, and through Weidemann's leg.

"I was really scared...really, really scared. I was fearing for my life because I saw how much blood I was losing," Weidemann recalled.

His mangled car was in a ravine nearly 300 feet from the road. Weidemann's cell phone lay somewhere in the bushes. He wondered whether anyone would find him.

A half hour later, fire crews arrived. "They were calming me down," Weidemann said. "They were telling me things were going to be all right, and they were there with me... I was still afraid. I knew it was a severe accident and the injuries were bad."

They used the jaws of life to cut Weidemann from his crushed car and rushed him to the hospital.

"I was in the operating room and I remember the doctor telling me that 'we have to amputate your leg. There's nothing we can do.'"  Weidemann was devastated. "The facts hit me. I won't be walking ever again."

After six surgeries, Weidemann believes he will walk again. A metal plate and several pins patched his left leg back together. It is a patchwork of scars, and there is pain, but Weidemann has begun to slowly put weight on that leg.

The next step is a prosthesis for his right leg.

Weidemann isn't talking about the lawsuit filed by his attorney, Jim Morris. Morris is part of the Texas-based law firm that's filed a total of six lawsuits against the maker of the guardrail, Trinity Industries.

The lawsuit filed on behalf of Weidemann claims Trinity, the City of San Marcos, San Diego County, and the State of California were negligent for installing the guardrail, saying they "knew or should have known there was a problem with their unilateral, unapproved modification of its guardrail and end terminal."

The lawsuit specifically mentions the ET Plus guardrail end-terminal, which in 2015 was the subject of a federal lawsuit. Trinity was ordered to pay more than $600 million for making false statements to the government about modifications to the ET Plus over a decade ago.

Although there have been several claims that the modified ET Plus maims or kills people instead of protecting them in crashes, to date, no court has ruled Trinity was negligent in a crash case.

A Team 10 investigation in the days after Weidemann's crash revealed the end terminal was a Trinity product, but was not an ET Plus.

We asked Morris if that would negate the claims in Weidemann's lawsuit. "They can deny that it's an ET Plus and discovery will shine a light on whether or not they're correct about that or not," he said. " What we know is that the guardrail behaved like an ET Plus as modified, because if you've seen the photographs of Mr. Weidemann's car, clearly the guardrail is going straight through his cabin, and that's what amputated his leg."

A spokesman for Trinity disagreed. Jeff Eller questioned whether the lawsuit is viable, saying it won't stand up in court from a factual standpoint.

“If it's not an ET Plus, then his lawsuit doesn’t have merit. It's either an ET Plus or It’s not. At this point, we have reasonable evidence to say that it does not appear to be an ET Plus, and we’re going to be making that fact known to the court at the appropriate time," said Eller.

Eller called the ET Plus "the most crash-tested end terminal system on the roads today. It has an unbroken chain of approval and eligibility by the federal government."

Safety advocate Josh Harman, who is a critic of the modified ET Plus, visited the crash site with Team 10 just days after the crash. He said the ET Plus wasn't in use at the site when Weidemann crashed. He said the type of end unit installed by the City of San Marcos was also dangerous because it had no break-away capabilities.

Team 10 contacted the City of San Marcos for a response to the lawsuit. A spokesperson said a statement would be made available, but that didn't happen. Both a spokesperson for San Diego County and  for CalTrans declined to comment on the lawsuit.

The collision report filed by a San Diego County Sheriff's Deputy said Weidemann was driving 90 miles an hour just before the crash. After the crash, he was tested for intoxication. Weidemann tested over the legal limit, and was charged with DUI. A spokesman from the San Diego County District Attorney's office said Weidemann pleaded guilty to a misdemeanor count of DUI and was sentenced to five years probation.

Weidemann is now studying to become a substitute teacher while he recovers from the crash. He'd like to be a coach or a P.E. teacher.

Weidemann said he now appreciates the little things he once took for granted like walking, or being able to go to the bathroom unassisted. His advice for others who find themselves dealing with serious injuries is know that you're not alone. Reach out to others with the same disabilities for advice and comfort, as he has.