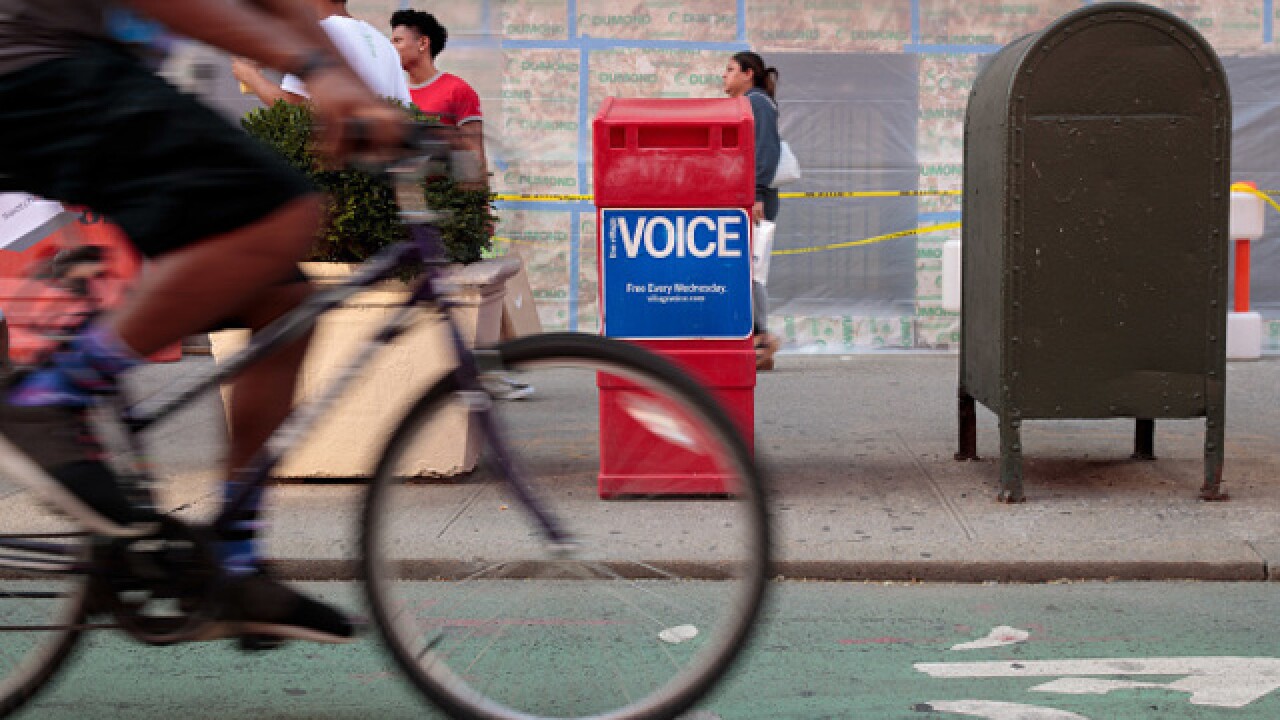 Copyright 2018 Scripps Media, Inc. All rights reserved. This material may not be published, broadcast, rewritten, or redistributed.
Drew Angerer
<p>NEW YORK, NY - AUGUST 22: People pass by a Village Voice newspaper stand in the East Village neighborhood in Manhattan, August 22, 2017. The Village Voice, one of the oldest and most well-known of the alternative weekly newspapers, announced today that it will no longer publish a print edition. The publication will maintain a continued online and digital presence. (Photo by Drew Angerer/Getty Images)</p>

Its publisher, Peter Barbey, announced Friday that the paper is ceasing publication altogether because of financial problems, a year after it stopped circulating in print and went to digital-only.

"Today is kind of a sucky day," he told staff members.

Eight of the Voice's 18 remaining staffers were laid off. Others stayed behind to digitize its print archive so that future generations can read it.

"It's 2018 and we're all aware of the state of the journalism industry," said deMause, 52, who started reading the Voice as a teenager in the 1980s.

The Voice was the country's first alternative newsweekly, founded in Greenwich Village in 1955 by a group that included writer Norman Mailer. It once had a weekly circulation of 250,000 copies and was home to some of New York's best investigative journalists and music writers.

The combative, left-leaning paper became known for its brash political reporting and its coverage of music and theater. It also became a powerful advocate for New York's gay community.

It won three Pulitzers, for editorial cartooning and feature writing in the 1980s and for international reporting in 2000 for a series on AIDS in Africa.

"This is a tragedy, and it hurts my heart," Dargis wrote on Twitter. "This is where I started my professional writing life and where I met brilliant writers — and many friends — too numerous to mention."

"As a longtime reader and fan of the Voice even more than as a writer and editor, I am deeply saddened that we won't have the Voice's voice anymore," deMause said. "It's a huge, huge loss."

Barbey, also president of The Reading Eagle newspaper in Pennsylvania, bought the Voice in 2015 in an attempt to save it following a series of ownership changes, staff departures and losses in readership and advertising that had left it in a state of perpetual peril.

He tried to stem the paper's losses by giving up print publication last summer and publishing online only — a step that removed the Voice from the sidewalk boxes that were a fixture on New York street corners for generations.

It failed to stop the financial bleeding.

"In recent years, the Voice has been subject to the increasingly harsh economic realities facing those creating journalism and written media," Barbey wrote. "Like many others in publishing, we were continually optimistic that relief was around the next corner. Where stability for our business is, we do not know yet. The only thing that is clear now is that we have not reached that destination."