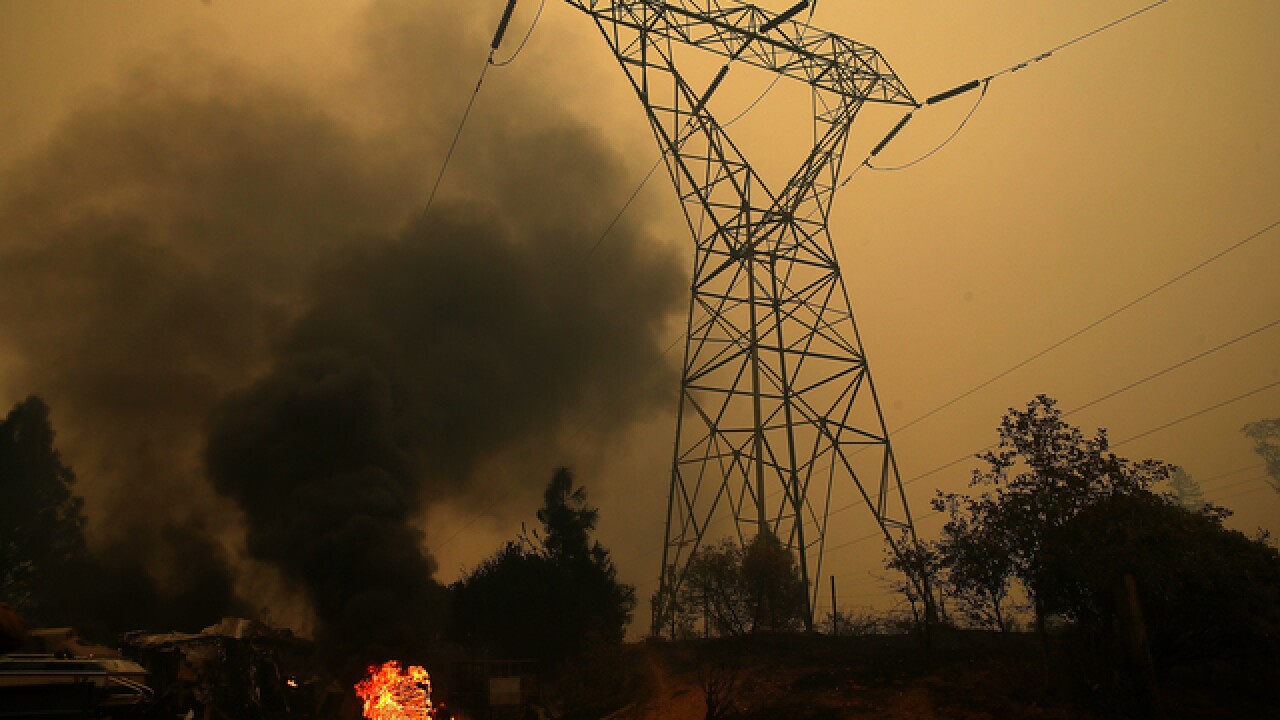 Image copyright 2018 Getty Images. All rights reserved. This material may not be published, broadcast, rewritten, or redistributed.
Justin Sullivan
<p>BIG BEND, CA - NOVEMBER 09: Smoke rises next to a power line tower after the Camp Fire moved through the area on November 9, 2018 in Big Bend, California. Fueled by high winds and low humidity, the rapidly spreading Camp Fire ripped through the town of Paradise and has quickly charred 70,000 acres and has destroyed numerous homes and businesses in a matter of hours. The fire is currently at five percent containment. (Photo by Justin Sullivan/Getty Images)</p>

SACRAMENTO, Calif. (AP) — California utilities again are facing severe financial pressures from the possibility that their equipment sparked catastrophic wildfires, including two that are now burning at either end of the state.

The pressure comes even though Gov. Jerry Brown signed legislation in September giving utilities some relief beginning next year.

The law made it easier for utilities to pass along costs from fire-related damages to consumers and also avoid possible bankruptcy from a series of major fires that occurred during the 2017 fire season that produced more than $10 billion in losses.

But there was a gap in the law: No damages specific to 2018 were included, so utilities face a higher bar to bill customers to cover those costs. And this year already supplanted 2017 as the most destructive in California's recorded history.

Authorities have not determined a cause for either of two major blazes burning now, but Pacific Gas & Electric Co. and Southern California Edison have reported irregularities with their equipment near the time and place where both ignited.

A woman who owns land near the site where a deadly wildfire started in Northern California said Monday that Pacific Gas & Electric Co. sought access to her property just before the blaze started because the utility's power lines were causing sparks.

PG&E shares have lost more than a third of their value since the Camp Fire broke out northeast of San Francisco, destroying thousands of homes and killing dozens of people as it leveled the town of Paradise.

Moody's Investors Service said Monday that the "shortcomings" in the legislation reflect negatively on PG&E's credit rating, which is barely investment grade.

"Moody's negative outlook incorporates the view that additional financial stress for PG&E is likely," Moody's spokesman Joe Mielenhausen said in an email. "Going forward, we will look for signs of additional legislative and regulatory support for the utility as it works through various legal processes."

Last week PG&E told state regulators that it detected a problem on an electrical transmission line near the site of the blaze minutes before the fire broke out. The utility later said it observed damage to a transmission tower on the line, and a PG&E spokeswoman said the company will cooperate with any investigations.

Betsy Ann Cowley, a property owner near the site said PG&E sought access to the area before the fire started, telling her power lines were sparking.

Southern California Edison told regulators there was an outage on an electrical circuit near the site where the Woolsey Fire started in Ventura County. It quickly spread into Malibu and destroyed hundreds of homes.

SoCal Edison said the report was submitted out of an abundance of caution and there was no indication from fire officials that its equipment may have been involved. The report said the fire was reported around 2:24 p.m. Thursday, two minutes after the outage.

Shares of parent company Edison International have tumbled more than 20 percent since the fire started.

California is one of just two states that hold electric companies entirely liable for damage caused by their equipment, even if they followed all safety precautions. The new law makes it easier for them to pass some of those costs along to consumers.

Utilities lobbied aggressively to eliminate that strict liability standard but lawmakers dropped the idea amid pressure from insurers, trial lawyers and fire victims.

Instead, legislators passed a law making it easier for utilities to manage the costs without going bankrupt. They created two mechanisms for investor-owned utilities to shift the costs of wildfire lawsuits onto their customers— one process that begins in 2019, and another for the 2017 fires.

For reasons that remain unclear, the law left the rules unchanged for 2018.

"The priority was on addressing 2017 victims and putting in place some fire-safety measures," said Paul Payne, a spokesman for Sen. Bill Dodd, a Napa Democrat and the bill's author. "The focus was on making 2017 victims whole."

It's too soon to say whether the Legislature will take up another fight over the 2018 fires, Payne said.

SoCal Edison officials say the Legislature needs to do more to shield utilities from wildfire-related liability.

"SCE believes the state can do more, including enacting fire-smart building codes, particularly in high fire risk areas, and ensuring the proper allocation of risk for the often-tragic consequences of wildfires," spokeswoman Justina Garcia wrote in an email.

A PG&E spokesman, Paul Doherty, did not respond to questions about the legislation, saying "our entire company is focused on supporting first responders."

Sen. Jerry Hill, a Redwood City Democrat and longtime critic of PG&E, called the report of troubles on PG&E's lines in the area extremely worrisome.

"At some point we have to say enough is enough and we have to ask: Should this company be allowed to do business in California?" Hill said. "These fires take a spark, and at least in the last few years fires have been caused by negligent behavior by PG&E. We need to see how we can hold them responsible, or look at alternative way of doing business."

Hill said he was exploring legislative options to keep a closer check on PG&E, including the possibility of breaking up the utility.

"They are a monopoly and they act as a monopoly," Hill said. "That is a problem when the motive is profit, and that just may not be the right motive for providing utility services."