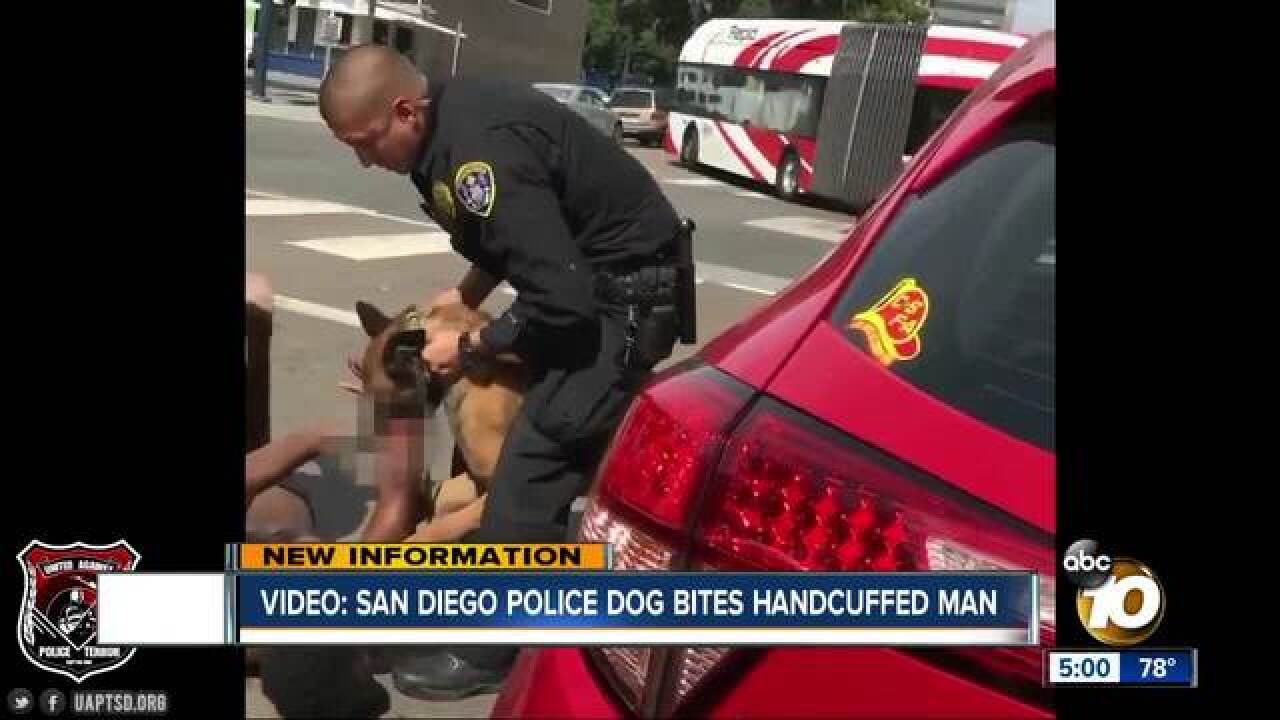 SAN DIEGO (KGTV) -- You can choose to disobey an officer, but with a police dog you have no choice.

Officers with the San Diego Police Department say a man attacked a cab driver, attempted to steal a motorcycle and threatened one of their officers in downtown on Sunday. So, one of their K9s was released.

The United Against Police Terror Group posted a video to their Facebook page, saying the officer "allowed the dog to maul the man" with his hands in handcuffs.

In the viral video, you see the man in handcuffs while the dog holds a strong grip on his arm and doesn't let go. The dog shakes his head back and forth while he screams in agony. You even hear witnesses yelling at the officers.

The SDPD says the officer and his dog did everything right. Instead of verbal commands, the officer used a "bite and hold" technique".

You see the officer in the video applying pressure to the dog's jaw by pulling up on the collar.

"We take physical control of the dog and forcibly remove him from the bite to prevent a re-bite," said Officer Larry Adair with the K9 unit.

But, the technique doesn't always work right away.

The dog in the video is clamped down on the man's arm for at least 30 seconds before letting go.

"If its one second, five seconds, or 15 seconds, if the dog is biting and holding like he's trained to do then the injuries that are inflicted immediately are no different 15 seconds later," said SDPD Public Information Officer Lt. Scott Wahl.

Police say it still keeps the injuries from getting worse.

"Versus a dog that bites multiple times up and down the arm we're going to have new injuries for each bite," said Wahl. "Had an officer not been there as quickly as he was there, the situation could have been much worse and more people could have been injured."

The man suffered minor injuries but is expected to be OK. He's facing several charges including robbery, attempted theft and being under the influence of drugs.

The San Diego Police Foundation is holding an open event with the public to discuss the bite-and-hold and other techniques they use with their dogs on August 19.