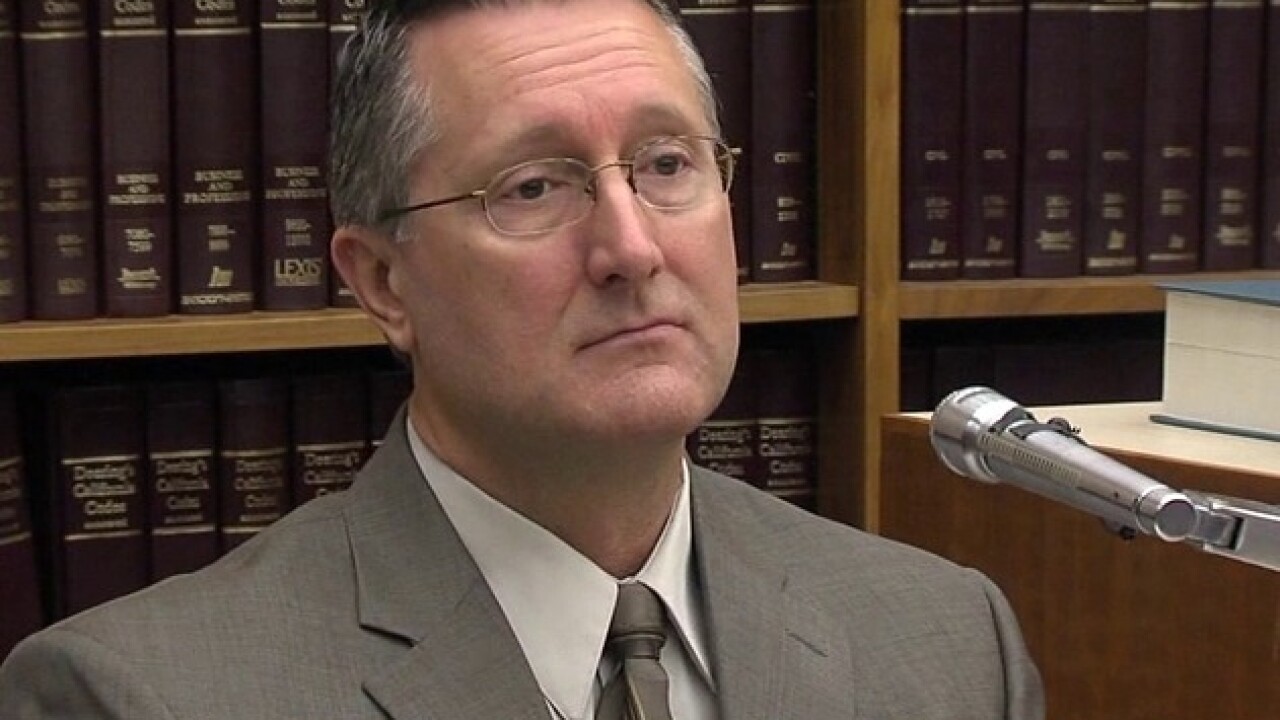 By: 10News Digital Team, Diana Alvear
Posted at 12:25 PM, Apr 12, 2016
SAN DIEGO -- A plainclothes sheriff's detective who put a driver in a chokehold during a traffic stop last year in La Mesa testified at a preliminary hearing Tuesday that the driver was wearing a tactical vest and refused to let the detective pat him down for weapons.
The motorist, 26-year-old Robert Branch, is accused of trying to pepper-spray San Diego County Sheriff's detective Paul Ward during a traffic stop on May 4, 2015, after the officer followed Branch off the Interstate 8 freeway.
Branch is charged with felony resisting an executive officer and attempting to use pepper spray on an officer, along with misdemeanor counts of resisting arrest and reckless driving. The preliminary hearing, which began Monday, will determine whether Branch’s case will proceed to trial.
Ward, a child abuse detective and 30-year veteran of the sheriff’s department, testified that the incident began when he tried to pull over Branch’s sedan for reckless driving on I-8. Ward claimed Branch was weaving in and out of traffic and even fishtailed at one point.
Both vehicles exited the freeway at College Avenue and stopped on a side street. According to Ward, Branch got out of his car and apologized to Ward for the way he was driving. Ward said he showed Branch his identification and badge and asked him for his license and registration.
Ward said Branch was wearing a tactical vest with a firearm holster and refused to let Ward pat him down for weapons. Ward testified that once he saw the vest, he did not want to turn his back on Branch.
Ward said Branch ignored repeated requests to comply with the pat down and show Ward his license and registration. Branch even walked away from Ward. At one point, Branch reached into his car grabbed his phone and began recording the encounter, Ward said.
Ward was concerned about what may be in the vest and that he couldn’t see where Branch’s hands were going. When he determined that Branch was not going to comply with his commands, Ward decided to put him in a chokehold, known as a carotid restraint hold, causing Branch to pass out for several seconds. Ward explained why he used the chokehold.
"Because it was the quickest method to get him under control and make sure he wasn't trying to obtain a weapon," Ward said.
"He went unconscious within probably about 10 seconds."
During Ward’s testimony Tuesday, Branch looked down at the floor and shook his head. Following the testimony, the judge viewed Branch’s cellphone footage.
On Monday, witness Justin Hudnall testified said he was pulling up to his mother's home in Del Cerro when he saw the altercation between Branch and Ward.
Hudnall said at the outset, he wasn't even sure that he was witnessing a law enforcement stop, partly because Ward was wearing a polo shirt and slacks.
As the incident unfolded, Hudnall said Branch was holding up his cellphone -- as if to take a "selfie" -- and Ward was trying to put some kind of restraint hold on Branch from behind.
Hudnall said he overheard Branch telling Ward that he didn't know who he was, that the detective didn't have his lights on as he followed him, that the detective hadn't shown him any identification, and that he couldn't arrest him.
Hudnall said he saw Ward put a restraint on Branch and saw Branch lose consciousness. Hudnall said Ward then identified himself as a sheriff's detective and asked him to call 911.
Branch regained consciousness and Hudnall picked up a gun that had fallen to the ground during the struggle, the witness said.
Hudnall said Branch dropped the pepper spray after taking it out of the vest he was wearing.
"He (Branch) seemed very panicked," Hudnall said. "I figured I or the deputy was going to get sprayed."
Scripps Only Content 2015