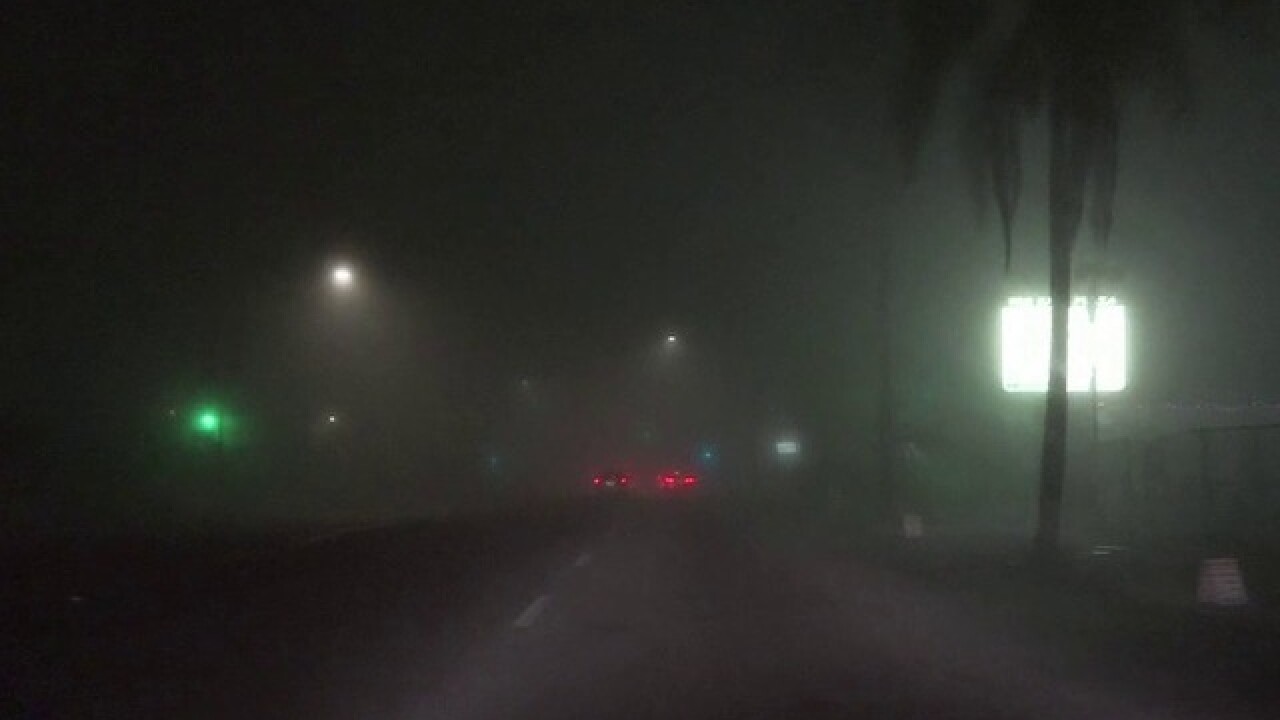 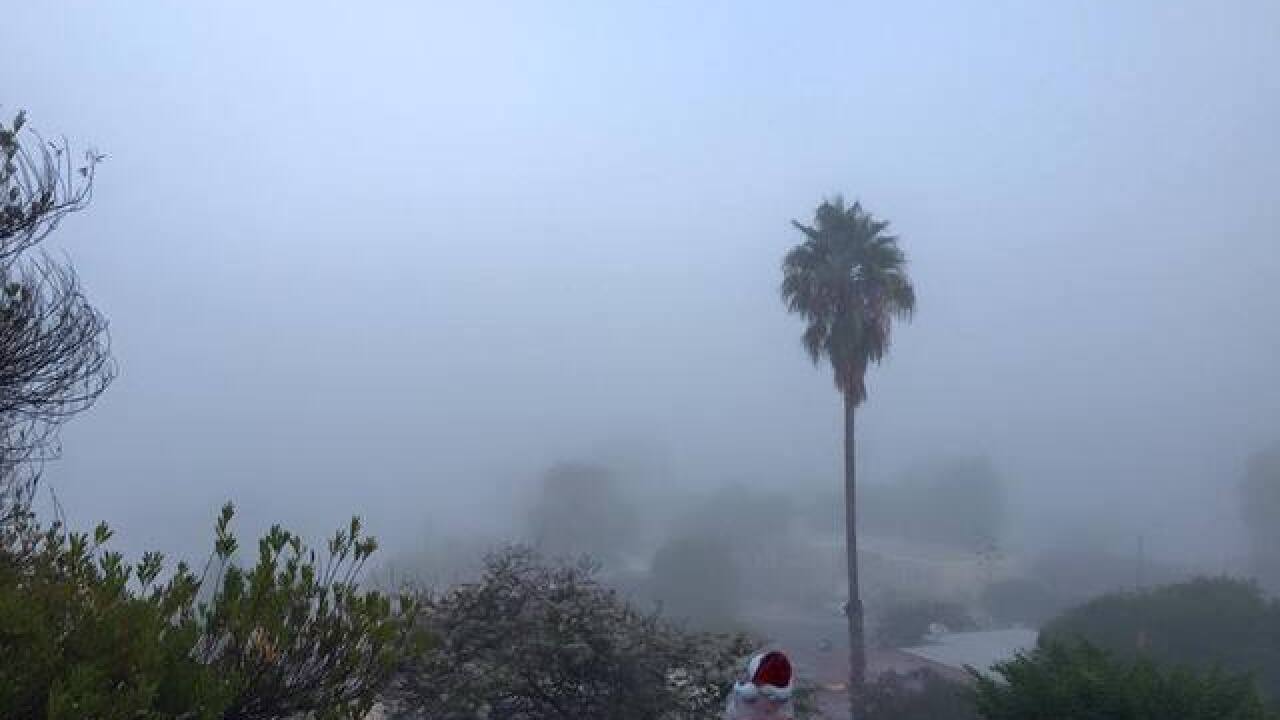 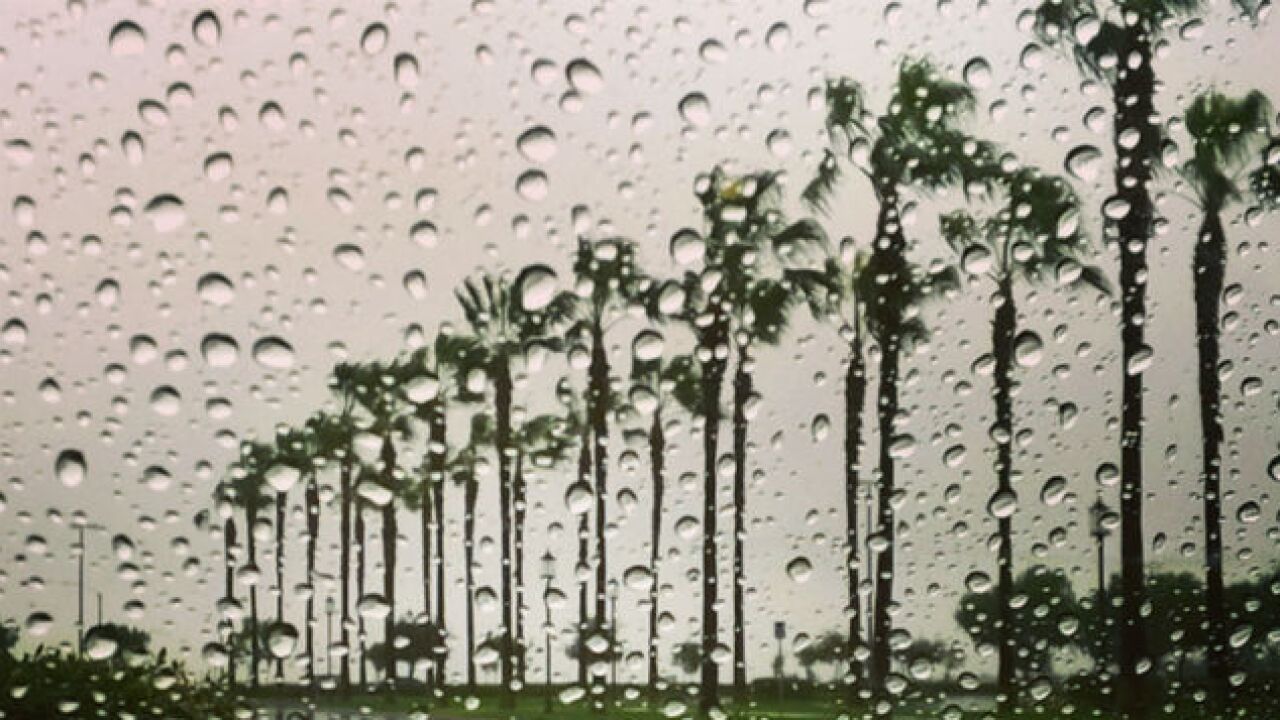 Early Thursday morning, thick fog dropped visibility to less than a quarter-mile in some areas, but it cleared during the mid- to late morning hours.

A high wind warning for the mountains took effect at 4 p.m. Thursday and is scheduled to last until 7 p.m. Friday. Winds of 25 to 35 miles per hour are possible during the advisory period, along with gusts that may reach up to 70 mph in the windiest locations.

A less severe wind advisory for the deserts will also remain in effect from 4 p.m. Thursday until 7 p.m. Friday, amid forecast westerly winds of 20 to 30 mph and gusts that could reach 55 mph.

"A low pressure trough riding a strong jet stream will move into Southern California this evening," according to the National Weather Service. "It will bring strong gusty westerly winds -- strongest on the mountain crests of San Diego and Riverside counties, along the adjacent desert mountain slopes and through and below the San Gorgonio Pass ..."

The winds are expected to peak Thursday evening through Friday morning, then gradually weaken late that afternoon.

Forecasters said the strong winds may lead to hazardous driving conditions on portions of Interstate 8, especially for motorists in high-profile vehicles. Visibility on some desert roadways may also be reduced to 5 miles or less due to blowing dust. The winds could also be strong enough to damage trees, power lines and unsecured outdoor objects.

A high surf advisory took effect at 4 p.m. Thursday to 4 p.m. Sunday amid surf of 5 to 9 feet and up to 12-foot sets south of Oceanside. A coastal flood advisory is set to remain in effect from 3 a.m. Friday to noon Sunday.

"High surf will create strong rip currents and minor beach erosion," according to the weather service. "Breezy west winds, high tides near 7 feet and high surf will create the possibility of minor coastal flooding in the mornings Friday through Sunday in low-lying areas along the beach. Conditions will temporarily improve Sunday before another trough moves across the region Monday."

The surf is expected to peak Friday afternoon through Saturday morning, according to the NWS.

Thursday night through Friday, a cold front is expected to move through the region. Forecasters said the storm could cause high temperatures in the mountains to drop into the 30s.

Up to three quarters of an inch of rain is also expected in the mountains, with lesser amounts falling elsewhere in the county, according to the NWS. The snow level is forecast to be around 4,500 to 5,000 feet on Friday, but forecasters said less than a few inches would accumulate.