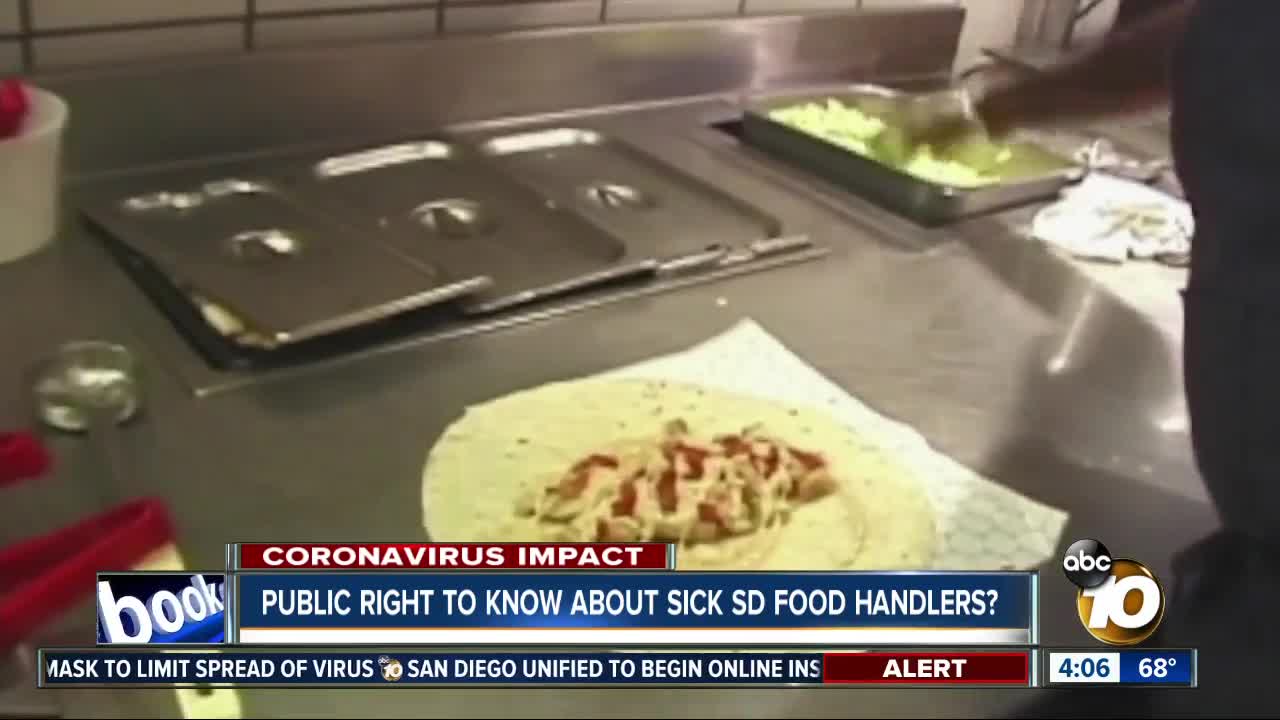 SAN DIEGO (KGTV) - Concerns and questions remain about why the County of San Diego won't release the locations of restaurants or grocery stores where employees have tested positive for COVID-19. The big question is, does the public have a right to know about specific locations where workers have tested positive?

10News continued on Tuesday to try to get answers since County officials confirmed on Sunday that multiple local food handlers have tested positive.

On Monday, Sprouts confirmed that two employees from its Carlsbad store tested positive.

It comes after the County confirmed that an Escondido Albertson's employee tested positive after 10News independently confirmed it Saturday.

During Monday's press conference, 10News asked the County, “Should the public have a right to know which restaurants may have workers who have tested positive?”

Dr. Nick Yphantides eventually said in part, “As far as the naming of the restaurants and so forth, it is only appropriate and relevant if there is actionable data upon which we are looking for members of the public or individuals to follow up on.”

In the same press conference, Dr. Eric McDonald clarified that in certain disease cases, the County does provide names and locations, adding, “It's because it's specifically for the public to do something. We did that in Hepatitis A. We specifically named a restaurant so that individuals who patronized that restaurant could get shots to prevent illness.”

He stressed that with coronavirus, it's different, saying, “In the case of COVID-19, because of the widespread community transmission, the advice to the public in a specific named restaurant would be no different than what we're giving already to the general public which is to stay at home [and] to social distance.”

The County sent 10News the following statement on Tuesday afternoon.

"The County does not share the names of specific restaurants or grocers who have employees who test positive, but does not prohibit or discourage the respective entities from reporting the information if they feel it is in the interest of public health. We don’t report the names because, unlike in cases of TB, there is no additional action the public needs to take. Restaurants have very clear guidelines and have been diligent about following those guidelines as well as CDC protocols. Consumers need to take the same precautions to protect themselves at every restaurant they choose to pick up from by social distancing, regularly washing their hands and self-isolating if they develop any symptoms.

Each restaurant worker case reported to County DEH is investigated by public health and DEH. In every case, an evaluation is made to determine if the worker worked while symptomatic and if their duties involved food handling that might put the public who ate at the restaurant (or purchased food at a grocery store) at any greater risk than general community exposure. In all instances thus far, no greater risk has been identified. It is important to note the CDC has said that currently there is no evidence to support transmission of COVID-19 associated with food. [cdc.gov]

If the public is concerned about what their grocer or take out restaurant is doing to make their location safe, they should ask... most will be happy to tell you. And so far, in all identified instances, these entities have done everything RIGHT in terms of actions for public health.... notice, cleaning, job analysis. There is no need for the public to do anything different based on this information about the grocers who have reported cases so far...indeed, one could argue that would be one of the safest places to shop, given their transparency on this case."