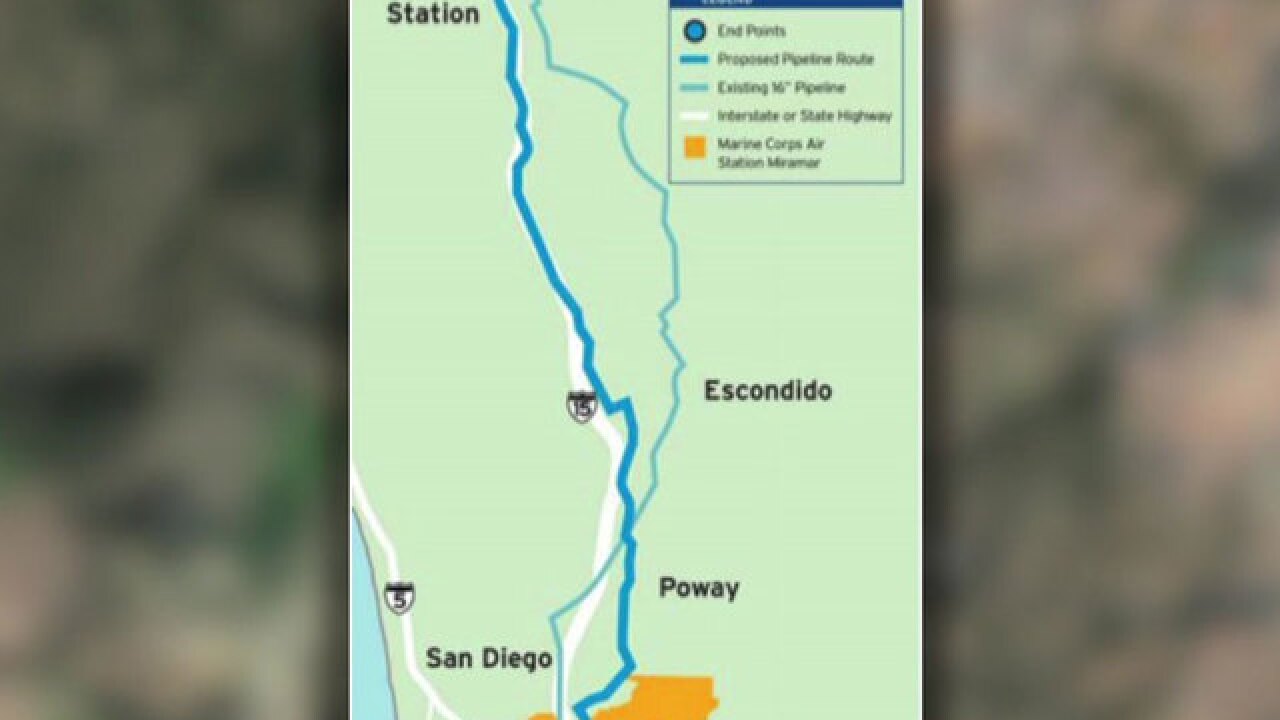 (KGTV) - A massive natural gas pipeline project that would have run through San Diego’s North County was rejected Thursday by the California Public Utilities Commission.

In 2015, San Diego Gas & Electric, along with Southern California Gas, proposed running a 47-mile, 36-inch diameter natural gas pipeline, known as Line 3602, from the community of Rainbow to Miramar. The project was expected to cost $639 million, with a target finish date of 2022.

However, in a vote Thursday morning in San Francisco, CPUC officials voted down the SDG&E/SoCalGas plan. The commission “determined that the utilities’ most recent natural gas supply forecast and the CPUC’s reliability standard for gas planning do not demonstrate that there is a need for the proposed pipeline.”

The CPUC also found the pipeline was not needed “for safety or reliability.”

Additionally, the CPUC determined the stretch from Rainbow to Miramar would be better served by smaller gas lines in the coming years.

“We hope this decision means that SDG&E’s scheme to have ratepayers bear the expense of unneeded infrastructure that would likely support export of natural gas via Baja California to pad shareholder profits has been permanently defeated. We knew that profit is SDG&E’s only motive - even, at the expense of the public and environment … But we were hoping that the CPUC was motivated by the evidence and the threat this pipeline posed to our health, safety, environment, and continued ability to exist on this planet. This time our hopes came true,” said Stephanie Corkran, who is with the group SanDiego350, an organization that opposed the project.

SDG&E officials issued this statement regarding the CPUC decision:

Safety is SDG&E’s highest priority. We are disappointed with the California Public Utilities Commission’s (CPUC) denial of the Pipeline Safety & Reliability Project application to upgrade and modernize our natural gas system to enhance safety for our customers.

Today’s decision denies the public a complete analysis of a project to replace a nearly 70-year-old pipeline in favor of costly testing that will result in significant community impacts with negligible benefits. Our proposal would have utilized city streets to locate a modern new pipeline, providing far less impacts to private property and natural resources, is safer and more cost-effective.

Because the CPUC has refused to evaluate these alternatives and costs and closed the application prematurely, customers living along the existing pipeline route and the public will not have the benefit of reviewing a full evaluation of alternative routes to determine the most cost-effective and least disruptive solution.

Nevertheless, we will work with CPUC safety staff to implement a construction plan that addresses the pipeline safety requirements as quickly as possible. We will also work to design construction so that impacts to private property and the public are as minimal as possible.

Operating a safe natural gas system is critical to providing safe and reliable energy to our customers, which fuels our economy. More than 880,000 homes and businesses in San Diego rely on natural gas for their heating and cooking needs today and will decades from now.