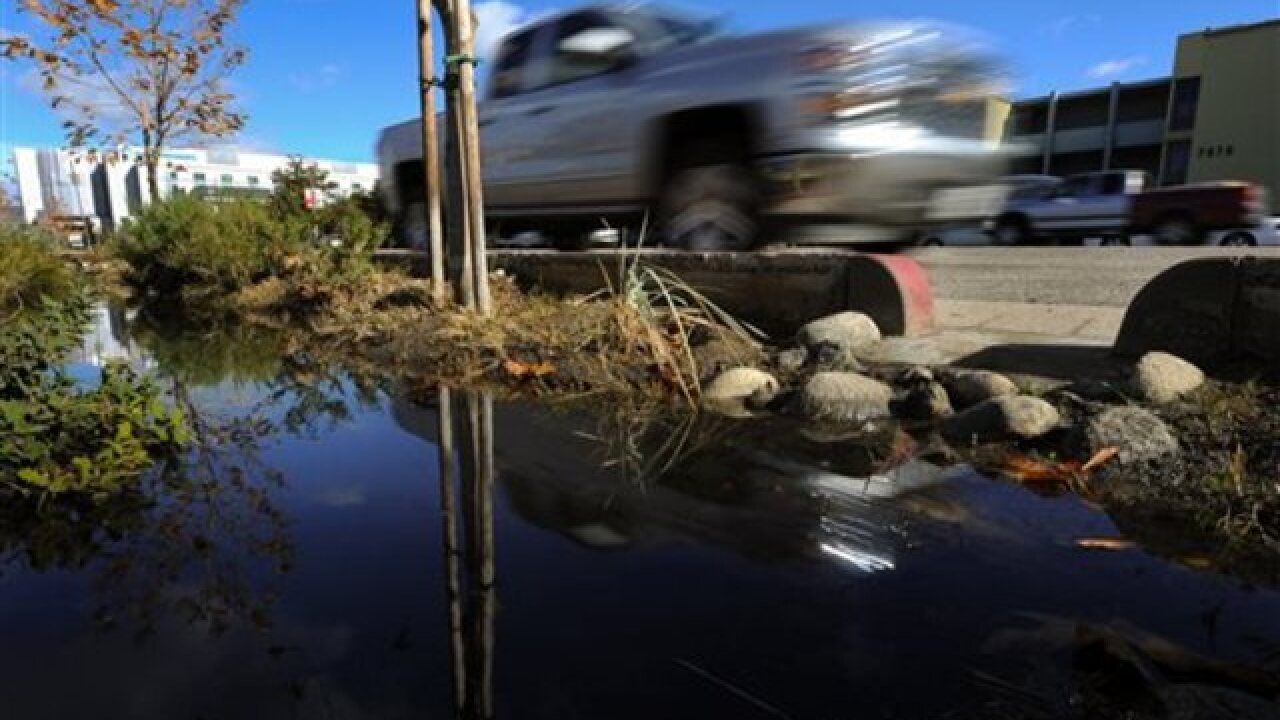 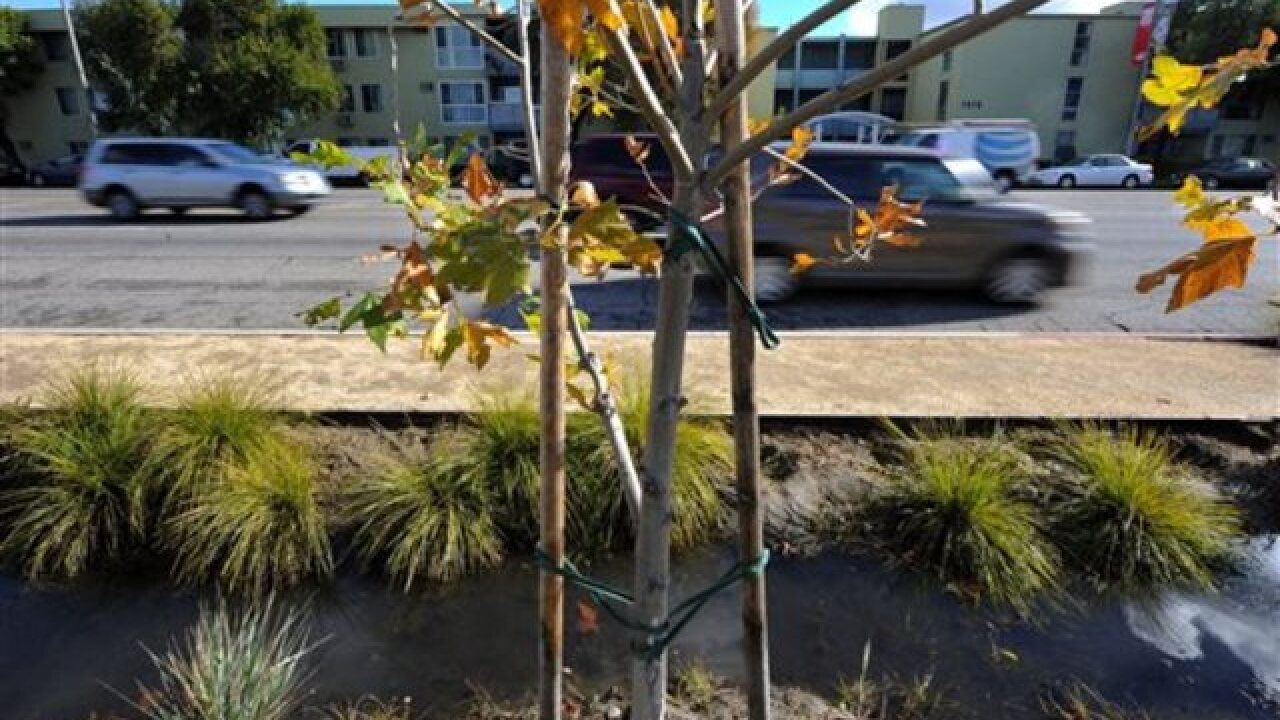 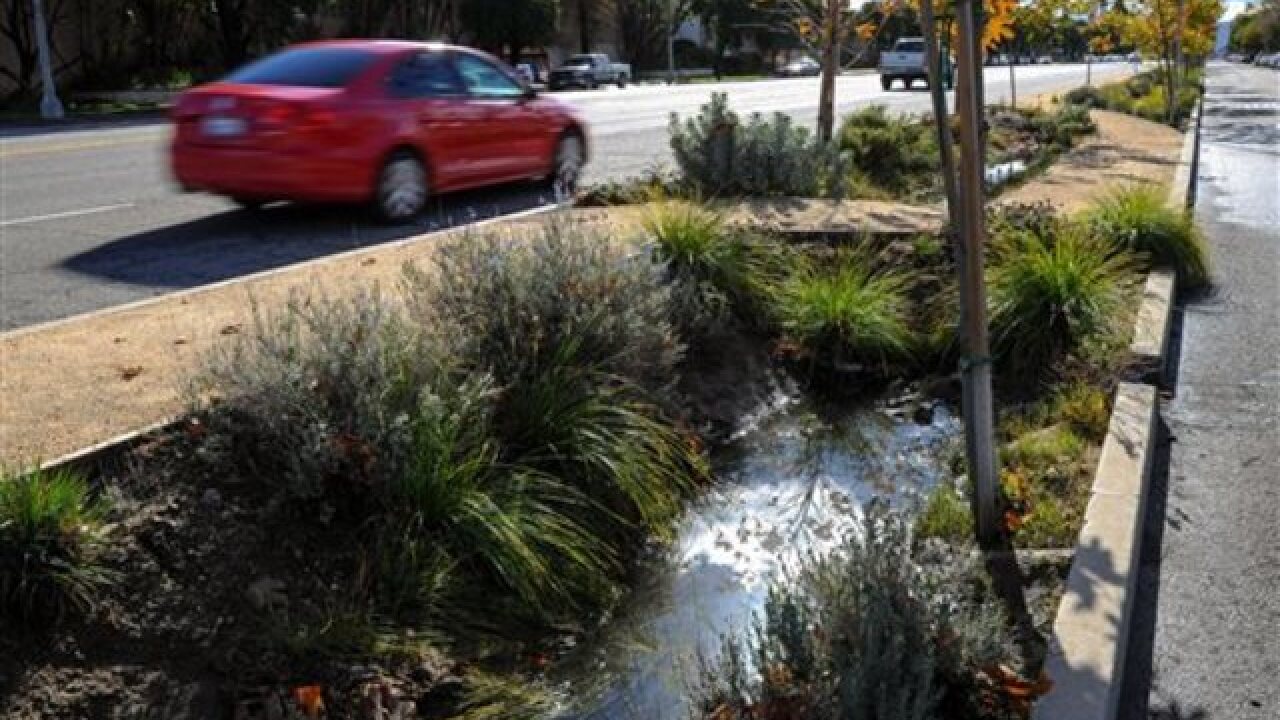 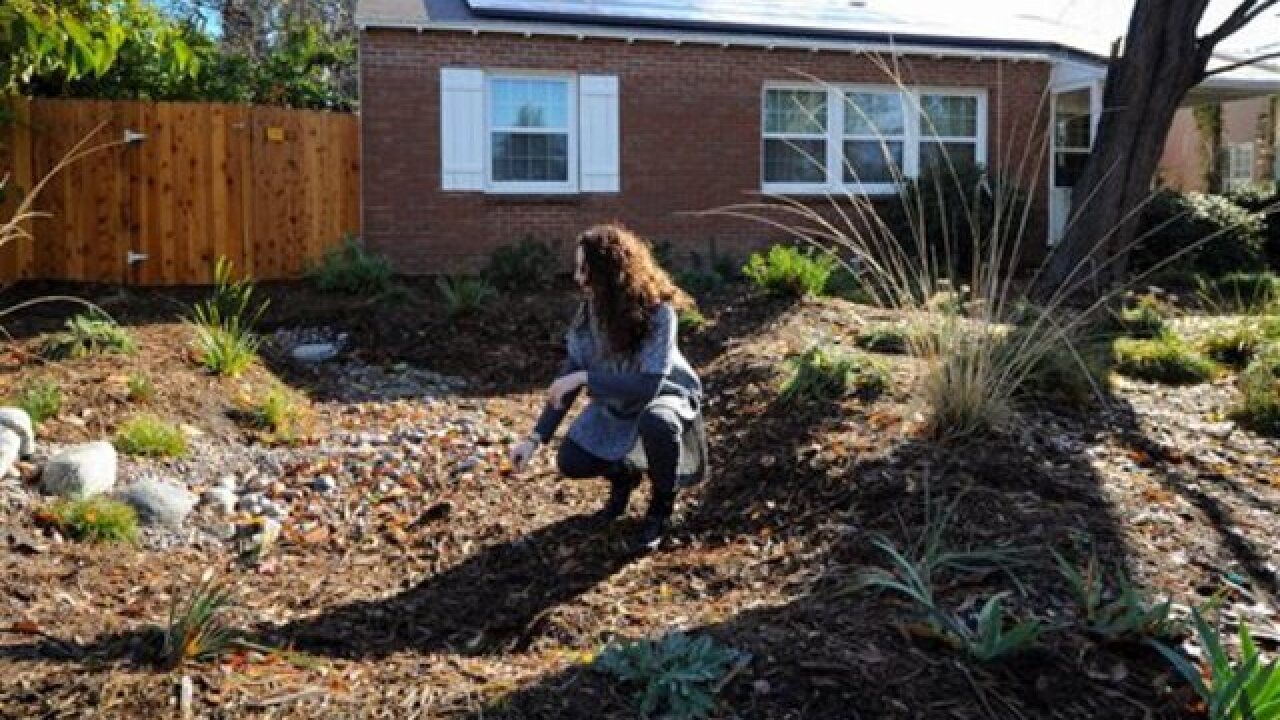 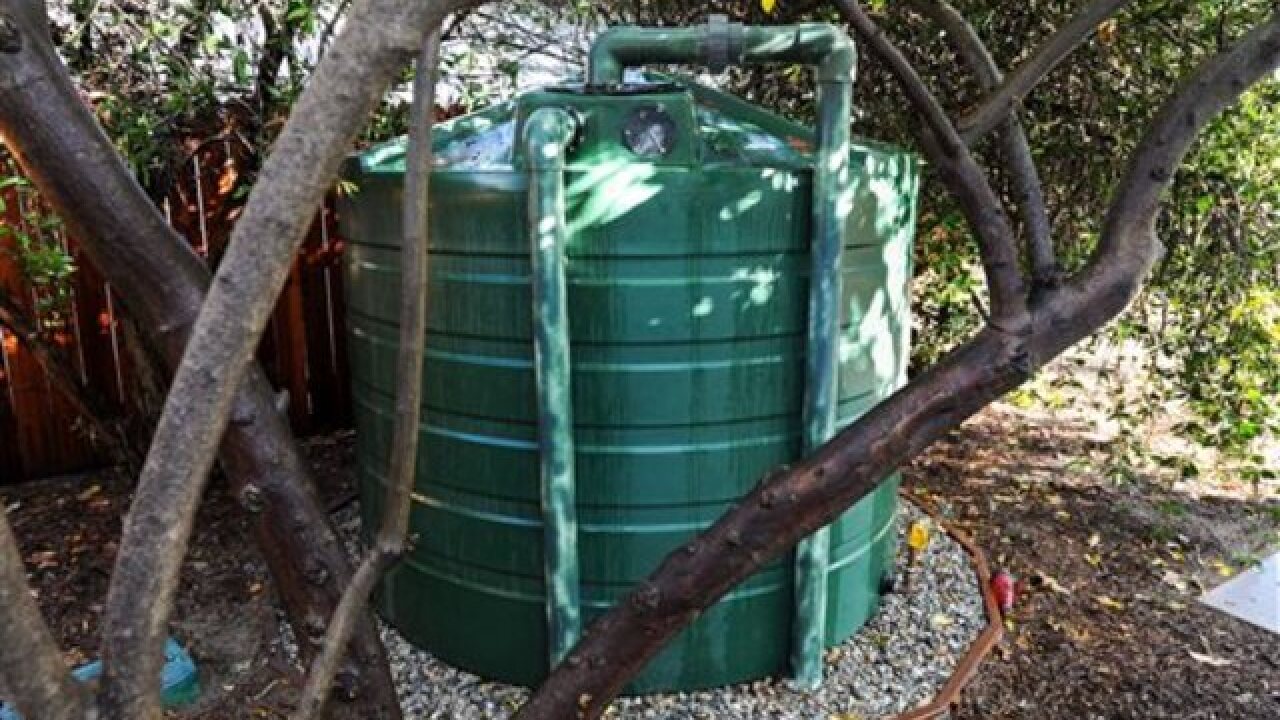 SAN DIEGO -- Much of the torrential rain that fell on Southern California this week flowed right into the ocean, just like it did before the state's epic drought.
That seemed like a good idea for many years, as storm drains provided a crucial defense against flooding. But with California entering what may be a fifth year of drought, water agencies are slowly moving to capture and store more of this precious resource.
"That was the 19th, 20th century thinking: 'Let's get that water out of here as fast as possible,'" said Deborah Bloome, senior director of policy at TreePeople, a nonprofit group that is working to increase rain capture in the Los Angeles area.
Now people are more likely to see a rapidly disappearing flood — nearly 3 inches fell on much of Southern California this week — as a wasted opportunity.
The State Water Resources Control Board approved a broad plan Wednesday for capturing more rain. The regulator is launching a road show this month to explain how it will dole out $200 million for projects to collect rain, part of a $7.5-billion water bond voters approved in November 2014.
The city of Los Angeles expects to collect 3.3 billion more gallons a year from projects now under construction, and eventually plans to capture 20 billion more gallons than the 10 billion it collects during normal years and up to 26 billion gallons during wet years.
Still, many believe more can be done, through projects large and small.
"This is a source of water that has been neglected for far too long," said Peter Gleick, president of the Pacific Institute, which authored a 2014 report with the Natural Resources Defense Council that estimated urban California could capture an additional 630,000 acre feet of rain a year, roughly enough for 1.2 million households. "It is untapped, and it has enormous potential."
Southern California imports a lion's share of its water from Northern California and the Colorado River, on aqueducts that stretch hundreds of miles. The drought has slashed water consumption across the state and renewed interest in developing new water sources, like recycling and seawater desalination.
California's rainy season usually runs from January to early March with short but intense storms, creating a limited window. Parched Southern California needs the water most, and has long had reservoirs to capture some of it. But much of the water dumped by El Nino's storms streamed down gutters and curbs through a concrete jungle, into drains that go through treatment plants and finally into the Pacific.
Los Angeles County captured 3.2 billion gallons during this week's storms as of Thursday afternoon, largely through 27 holding ponds, said Steven Frasher, a spokesman for the public works department. Water from the Los Angeles and San Gabriel rivers flowed into fields that percolate into aquifers for future pumping.
The Orange County Water District, which relies on rain capture for about 10 percent of its supplies to 2.4 million people south of Los Angeles, collected about 3.3 billion gallons from this week's storms as of Thursday afternoon. The captured water flows into the Army Corps of Engineers' Prado Dam and is slowly released 11 miles downstream on the Santa Ana River, to ponds that seep into an aquifer. The rest goes into the ocean.
"In a dry year we capture essentially all of it. In a big, wet year, we lose more. On average we capture about 50 percent," said Greg Woodside, the agency's executive director of planning and natural resources.
The San Diego region, unlike Los Angeles and Orange counties, lacks large ground aquifers that can store water. The city of San Diego collected about 800 million gallons this week at nine reservoirs as of Thursday morning, said spokesman Kurt Kidman.
The San Diego region gets 7 percent of its water from rain on average and about 20 percent during the last El Nino storms in 1998, said Dana Friehauf, water resources manager for the San Diego County Water Authority.
"There's the potential to do more," Friehauf said. "We have to look at the cost to our ratepayers and see what makes sense."
Modest efforts are taking hold across Southern California.
In Los Angeles, the city gutted a 16-foot-wide concrete street median that runs the length of 12 football fields and replaced it with vegetation that captures rain over 111 acres. The $3.4-million project, completed in 2014, is designed to collect enough water to fill more than 27 Olympic-sized swimming pools a year.
Bloome's group, TreePeople, operates a 216,000-gallon underground cistern at Coldwater Canyon Park, collecting rain from a conference center roof and a parking lot to be pumped for irrigation.
Even smaller projects are being eyed for potentially big impact. In November, TreePeople unveiled a 1,320-gallon tank at a home in North Hollywood, which can be remotely by computer to drain before major rain, ensuring there is room to capture water. The group plans to equip several more houses by next month.
"We want to show folks this works for El Nino," Bloome said.
Associated Press 2016