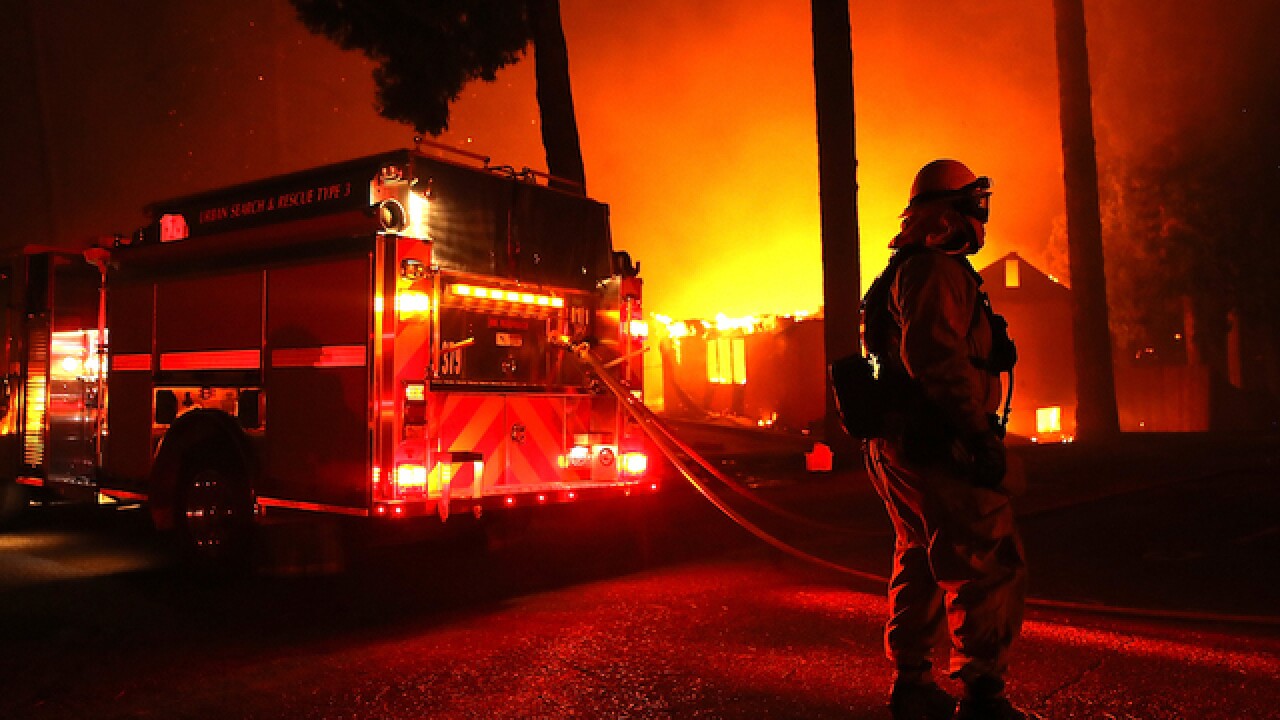 Image copyright 2018 Getty Images. All rights reserved. This material may not be published, broadcast, rewritten, or redistributed.
Justin Sullivan
<p> Firefighters try to save a building as the Camp Fire moves through the area on November 8, 2018 in Paradise, California. Fueled by high winds and low humidity, the rapidly spreading wildfire has ripped through the town of Paradise, charring 18,000 acres and destroying dozens of homes in a matter of hours.</p>

They all could be the next Paradise.

A McClatchy analysis reveals more than 350,000 Californians live in towns and cities that exist almost entirely within "very high fire hazard severity zones" — Cal Fire's designation for places highly vulnerable to devastating wildfires. These designations have proven eerily predictive about some of the state's most destructive wildfires in recent years, including the Camp Fire, the worst in state history.

Nearly all of Paradise is colored in bright red on Cal Fire's map — practically the entire town was at severe risk before the Camp Fire raged through last November, burning the majority of homes in its path and killing 85 people.

Malibu, where the Woolsey Fire burned more than 400 homes last year, also falls within very high hazard zones. As does the small Lake County town of Cobb, much of which was destroyed by the Valley Fire in 2015.

"There's a lot of Paradises out there," said Max Moritz, a fire specialist at UC Santa Barbara.

All told, more than 2.7 million Californians live in very high fire hazard severity zones, from trailers off quiet dirt roads in the forest to mansions in the state's largest cities, according to the analysis, which is based on 2010 block-level census data. The California Department of Forestry and Fire Protection says its maps show places where wildfires are likely to be extreme due to factors including vegetation and topography.

The maps aren't perfect in their ability to forecast where a fire will be destructive. For instance, the Coffey Park neighborhood of Santa Rosa isn't in a very high hazard zone, but powerful winds pushed the Tubbs Fire into that part of the city, largely leveling the neighborhood in October 2017.

Coffey Park was built "with zero consideration for fire," said Chris Dicus, a forestry and fire expert at Cal Poly San Luis Obispo. "Fire was in the mountains — there was no consideration that fire would cross (Highway) 101."

RELATED: Do it now: Clear out brush and create defensible space

Cal Fire is making new fire hazard maps — ready in a year or so — that will incorporate regional wind patterns and other climate factors. In the meantime, experts say the current maps, created about a decade ago, still provide an important guide to predict where wildfires could do the most damage, in the same way floodplain maps highlight areas that could be hit hardest during severe storms.

The at-risk communities identified by McClatchy also should serve as a starting point for prioritizing how California should spend money on retrofits and other fire-safety programs, Moritz said.

California's state-of-the-art building codes help protect homes from wildfire in the most vulnerable areas, experts say. But the codes only apply to new construction. A bill introduced by Assemblyman Jim Wood would provide cash to help Californians retrofit older homes.

"This will go a long way toward these different municipalities (in showing) that they deserve funding," Moritz said.

McClatchy identified more than 75 towns and cities with populations over 1,000 where, like Paradise, at least 90 percent of residents live within the Cal Fire "very high fire hazard severity zones."