San Diego 'McMansions': A developer added to a home, then tore it down

A developer added onto a home, then tore it down. A San Diego development loophole explains why

SAN DIEGO (KGTV) - There's a stretch of Linda Rosa Avenue in Bird Rock that winds up a hillside and leads to homes with sweeping views of San Diego's coastline.

The homes that enjoy that view, however, vary quite a bit. Some are older, smaller, and were built in the 1960s.

Others are modern, and tower above the rest. Some refer to those larger homes as "McMansions," and wonder how they keep getting approved without any pushback from neighbors to protect community character.

"They basically skirt the reviews," said Dave Ish, who lives in an older home on Linda Rosa.

Developers are able to skip the lengthy and public Coastal Development Permit process as long as they retain at least 50 percent of a structure's exterior walls. It's spelled out in city code. That's why McMansions are popping up in San Diego's coastal neighborhoods.

But it turns out the city's 50-percent exemption creates even more flexibility for developers because they can get permit after permit with no waiting period in between.

Developer Ben Ryan, of Tourmaline Properties, did that for an ocean-view home on Linda Rosa.

In October, the city issued him a permit to add a closet and convert a garage to a carport, under the 50-percent exemption.

"Obviously it was just a temporary deal," Ish said. "Nothing was finished, it was this bowed out paneling, these windows weren't finished. The cuts were all messed up."

The city reports the work being finished Feb. 1. It may have been a quick job, but it changed the layout of the home enough to allow Ryan to alter the design for a larger project.

Today, the home is just half a wood frame - the closet and carport nowhere in site. The closet, however, was once a massive frame added on to the home (more photos above): 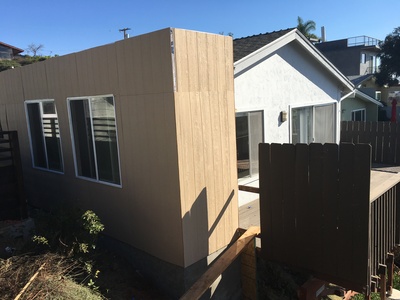 </p><p>In a statement, Ryan said the Coastal Development Permit has become an arduous process - delaying projects a year and adding up to $100,000 in costs.

"It has no relation whatsoever to bulk or scale," Ryan said. "The bulk and scale of a house designed using the 50-percent exemption is governed by the same rules as a house designed without using it."

Ryan said the back-to-back serial permitting simply allowed him more options, such as with windows and openings - under the same rules.

"We are excited about the design of the home, and hopeful that it will be a contender for several architectural awards," he said.

A representative for Councilmember Barbara Bry, whose district includes Bird Rock, said her staff recently contacted the mayor's office to address concerns over the 50-percent exemption.