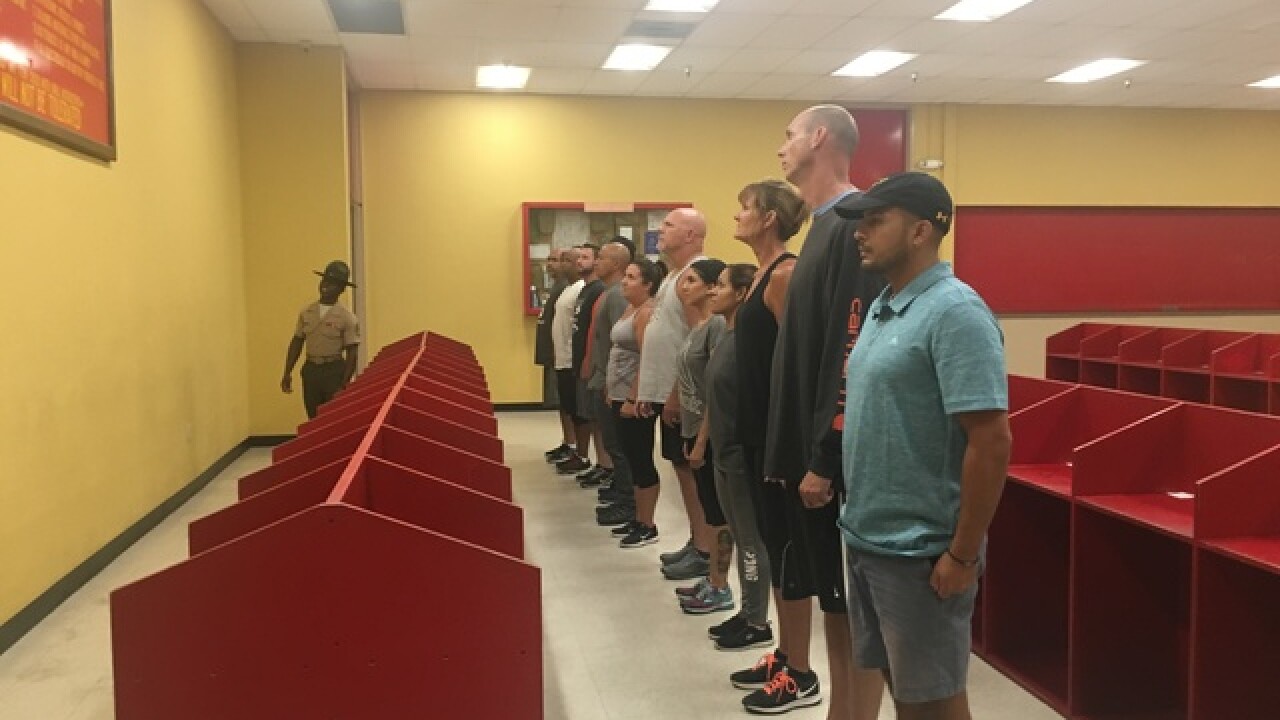 The week-long experience provides perspective and options educators can present their students back on campus.

S. Sgt. Baumann started with an explanation of commands they would hear throughout the day and how to appropriately respond.

The teachers formed two lines and entered the bus to take them to MCRD.

The group of teachers who sat in the back were immediately yelled at, "all of you will stand up, did I say move yet?," Baumann said. They responded, "No sir!"

Baumann commanded them to move to the front of the bus and started counting down from 30, "did I say sit down? I must've said sit down, right?" "No sir!"

On the bus, the teachers took a moment and thought about what was to come.

"The drill instructing wasn't as bad as I thought it was going to be, but I'm a little nervous about the physical aspects," Ashley Garcia, a Resource Teacher at Carlsbad Village Academy, said.

As the bus approached the entrance to the training facility next to the airport, Baumann commanded the teachers to place their head on the seat in front of them.

"So this is going to be the experience that a lot of the recruits have when they enter the recruit depot for the first time," he said some are exhausted when they arrive after traveling all day.

Once the bus stopped, another drill sergeant strode on, shouting orders.

The commands flustered the teachers as they struggled to quickly follow instructions.

You can't recreate the intensity unless you're actually there, watching a movie is nothing compared to an experience." Chemistry Teacher at Esperanza HS Michael Woodward said.

"Trying to get on those footsteps is what we were actually doing, but in my mind I was just trying to not mess up," Woodward said about their first task. The teachers scrambled to stand on yellow painted footprints, before reading the Military Uniform Code.

"So for us as an educator it's been great because they have led us through each of the steps and why," Marc Azcona, AP Psychology Teacher at La Quinta HS said.

"When they give that instruction, someone's able to follow it explicitly, quickly and obediently and what that does is saves lives," Baumann explained.

The teachers hustled to the receiving room where drill instructors demanded they remove anything from their pockets, spit out gum, and read the rules on possession during bootcamp.

They then went through what a recruit's phone call home would be like, reading from a script hung above a phone bank.

The teachers then went to the Moment of Truth room, where they learned the history, makeup, and benefits of the Marine Corps.

Next stop, the barracks.

Stepping off the bus came with more commands, the teachers following more closely, and confidently.

Inside the barracks, more drill instructors startled the group. The three introduced appeared through a door that slammed shut each time, making a few teachers jump.

After shouting the definition of a marine recruit, the instructor lowered his voice to a normal level and continued explaining his role.

The teachers then watched a guided talk, where recruits debriefed on important topics, like what it means to be thanked for your service.

You're not thanked for what you've done for your country, a platoon leader said, you're thanked for the generations before you who have kept our country free.

The teachers were in awe the recruits were eager to respond when a question was asked.

Around noon the educators met up with recruits set to graduate that Friday.

"I always thought it was just all grunts, like that's all you had. I've learned that you can have specialized jobs," Woodward said, surprised there are positions in the band or manning artillery.

"It actually is a great opportunity, it's fun, they all enjoy it, you know the schooling is great, the benefits are great, the retirement's great," Perkins said.

Recruit Joshua English said he's always dreamt of being in the Marines. He has veterans in the family and was chosen the first day of training for a leadership role, known as the "guide".

"I really lifted up my shoulders and I really grew some confidence," English said.

He said it was hard knowing he was responsible for the 53 recruits, "you've got to be on your A game every single day, because you know you can't let the person on the left or right of you down."

English said graduating bootcamp is just the beginning of his career.