ANAHEIM, Calif. (KGTV) - In news that no one saw coming in the midst of the pandemic, the Walt Disney Company has announced plans to expand the Disneyland Resort with possible new attractions and multi-use areas.

Starting this week, Disney officials will ask the city of Anaheim to update their existing development approvals.

The Disneyland Forward project may take up to two years before Anaheim City Council members are asked to make any zoning changes that would allow for more hotels, retail, and entertainment at the theme park area.

"In the past year, we have seen what the Disneyland Resort means to Anaheim's economy and the role it plays in helping us provide vital public services for our residents, neighborhoods and businesses," Anaheim Mayor Harry Sidhu said. "I welcome fresh thinking about how the Disneyland Resort evolves and how we best maximize this resource for our city."

The west side of the Disneyland Resort, located near Disneyland Drive, Katella Avenue, Walnut Street and Magic Way, would see the existing theme parks of Disneyland and California Adventure expanded under the project dubbed DisneylandForward, according to the report. The potential development would not go beyond the parks' current footprint. 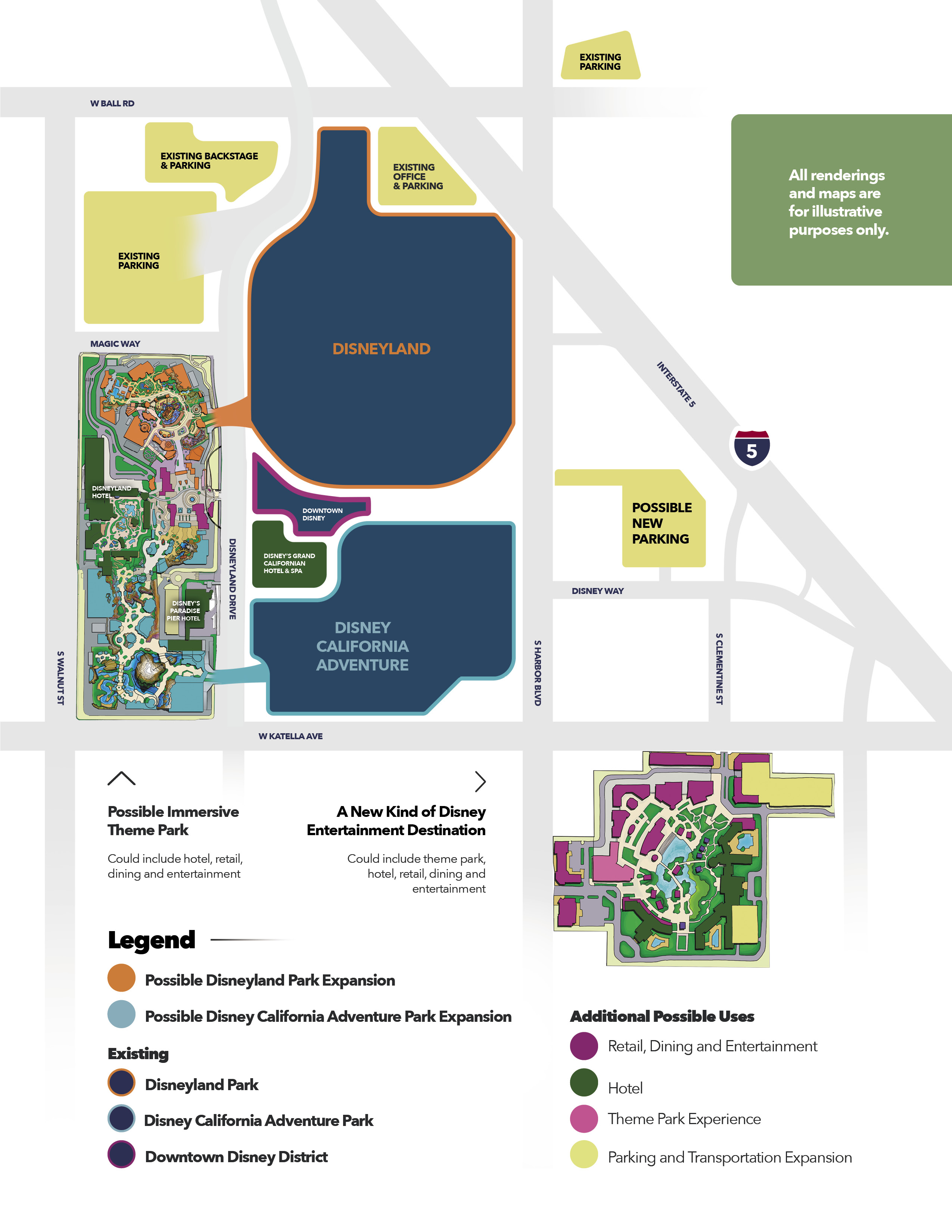 According to the project's website, inspiration for new attractions and entertainment could be based on "Frozen," "Tangled," "Peter Pan," "Zootopia," "Tron," and "Toy Story Land," for example. Nothing is set in stone, of course.

Disneyland has permission from the city to build new attractions, hotel rooms, parking and other retail businesses, but Disneyland Resort President Ken Potrock said, "our existing development approvals severely limit the ways in which we can expand and locate our offerings."

It's not unusual for a business to request zoning changes to allow for new development, Potrock said.

For example, while a parcel at the theme park area may be zoned just for a hotel, Disneyland might want the flexibility to add entertainment uses such as a water slide, Mike Lyster, a spokesman for the city said. Another possibility is converting the 4,589- space Toy Story parking lot, which is being used as a vaccine distribution center now, into a hotel use, Lyster said.

First, Disneyland officials will work with city planners and then those plans will be submitted to a planning commission, which will forward a recommendation to city council members who have the final say.

"We would imagine two years for the whole process to take," Lyster said.

The City News Service contributed to this report.