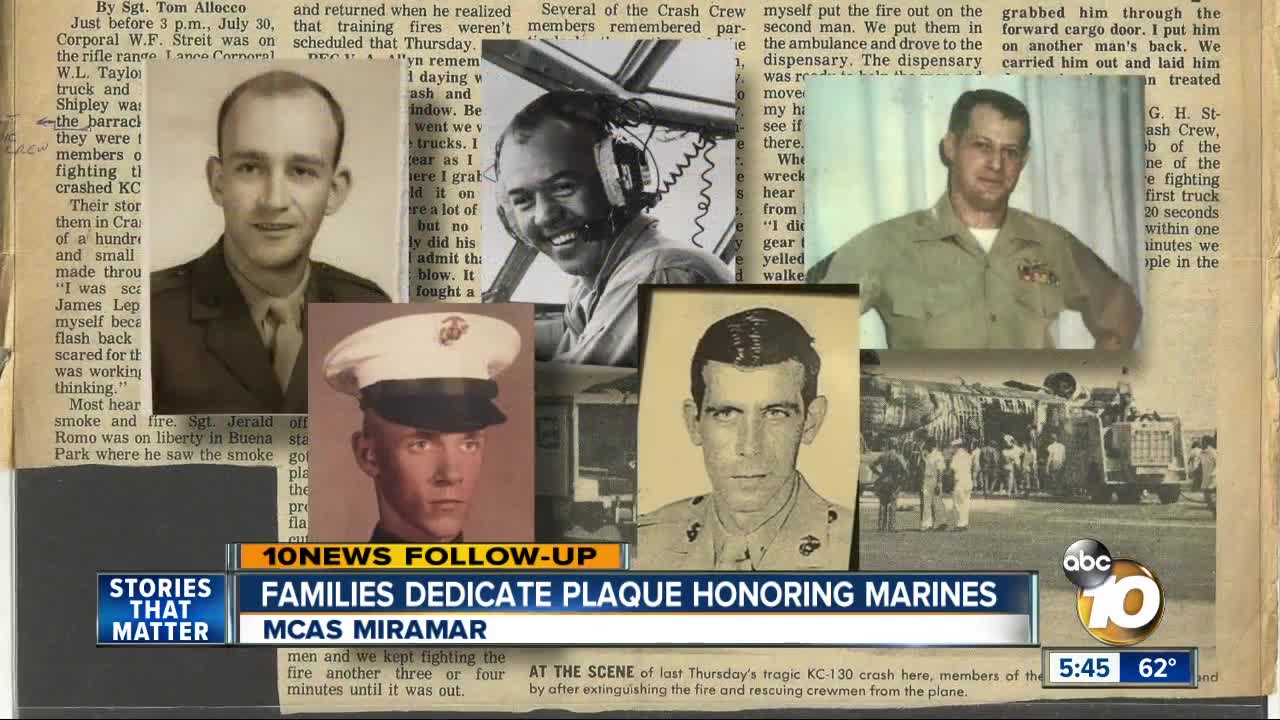 A plaque honoring Marines killed in a military training crash that happened 50 years ago at MCAS El Toro was unveiled at MCAS Miramar Wednesday. 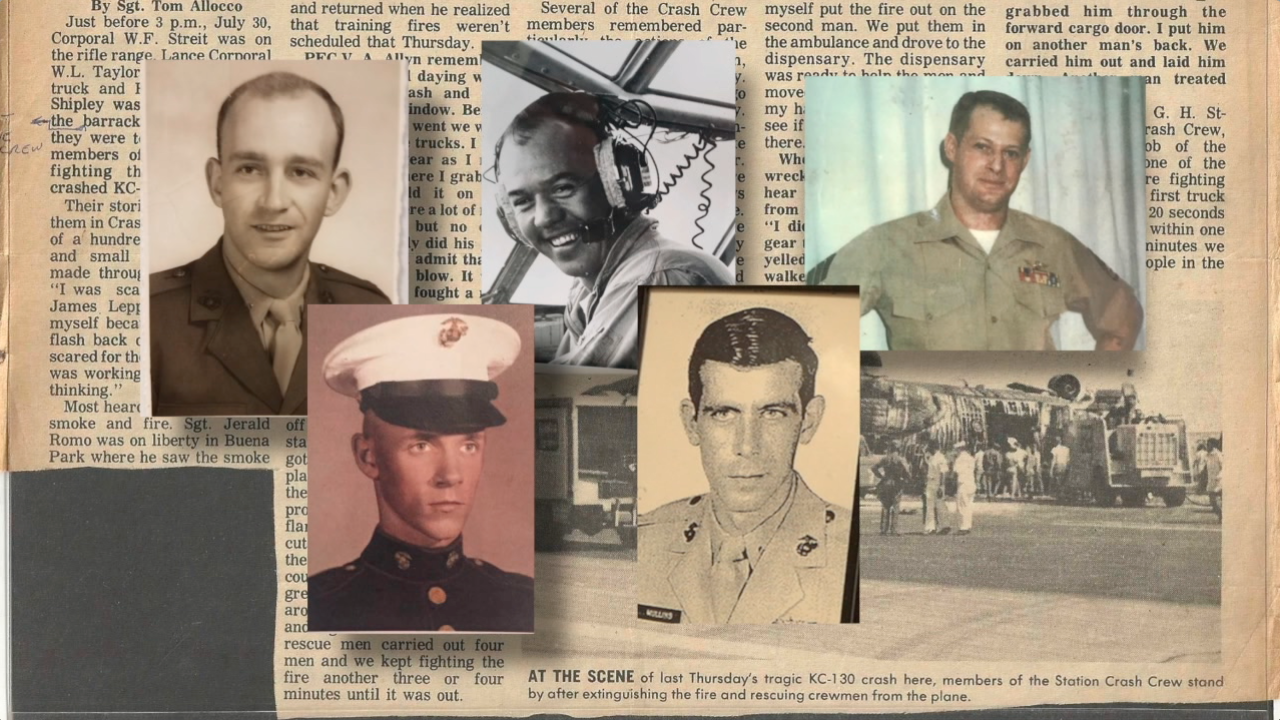 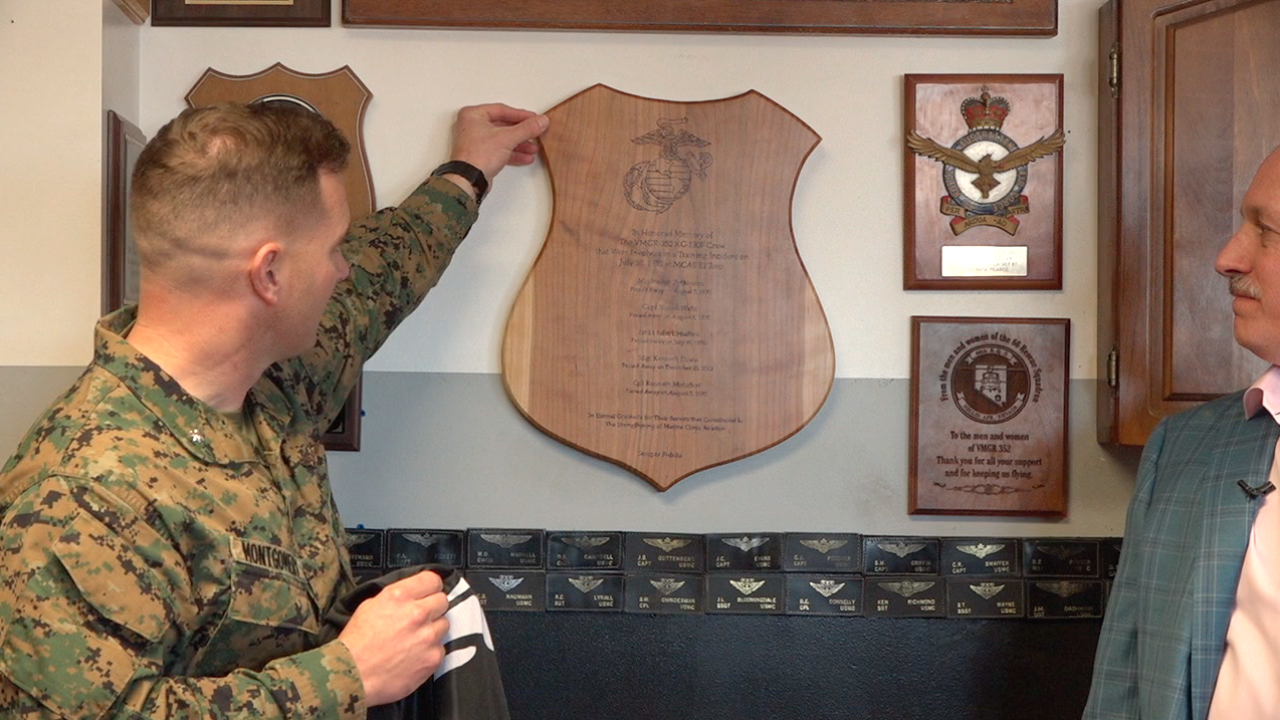 "Knowing answers has really allowed us to come together," the granddaughter of Maj. Walter Zytkewicz, who was in the crash, said tearfully.

Dozens of family members traveled to MCAS Miramar, where the squadron now resides, for the dedication.

"I was 7 years old and we lived on base at El Toro, we saw the black smoke, playing around outside and was like, 'Hey mom look!' and she was like, 'Oh it's just the crash crew practicing,'" Ruane said.

It wasn't the crash crew. A C-130 was completing touch-and-go practices and crashed violently, ultimately killing four of the five Marines on board.

Her father, K.C. Davis, was the only one who saw his kids grow up, "I remember my mom going to three funerals in one day."

"I go up to visit him twice a year, typically Memorial Day and Veteran's Day," said Davis.

Keene was in the neighborhood, Jan. 15, on his way to pick up his wife from the airport, and noticed Zytkewicz's grave next to the grave of his cousin, Capt. Robert Walls. Zytkewicz was in the Marines, like his cousin, and died the day before Walls. He said that "grabbed" him.

Up until that day, Keene knew his cousin died in a military crash, but it wasn't spoken of at the dinner table. He knew there must be a connection to the two men, so he started digging.

Keene said Metzdorf wasn't supposed to be on the flight but, "called his best friend and said 'hey could you go on this flight for me today?' So they switched and that cost him [his life]."

Keene tracked down the redacted incident report and filled in the gaps with interviews from witnesses and Marines who knew the men on board.

"Witnesses say they waited too late to pull the plane out of the angle of attack and the plane hit, bounced, flipped upside down, hit again, bounced in the air, the left wing fell off, all four props fell off. The plane landed right in the middle of the air field. Flames and fuel streamed down the runway, they said it was basically a long stream of fuel and fire," he said.

Keene was amazed to learn his cousin and Metzdorf walked through the flames following the crash, "the report listed 80 percent - 90 percent coverage of third degree burns. I can't even imagine how he walked out," he said.

Mullins was killed on impact, found 50 yards from the plane with a broken leg. Walls, Zytkewicz and Metzdorf died days later from their injuries. Keene said Walls died from burns in his lungs.

The exact cause was redacted in the report but Keene believes the Marine Corps wants to preserve the honor of the pilot and protect his family.

"After the crash, the material that made up Marine Corps and Navy flight suits was changed. They thought it was a flame retardant material, unfortunately it burned and melted to their skin," he said.

Keene hopes these difficult discoveries will fuel Marines' admiration. To keep their memories alive, Keene created a plaque with the team's names. The plaque sits on the wall just inside the entrance to the squadron's historical room.

"Every other Marine that goes through that squadron will see that plaque and realize there's five men that in some way or another touched their lives from either a safety stand-point or history and lineology of VMGR-352," Keene said.