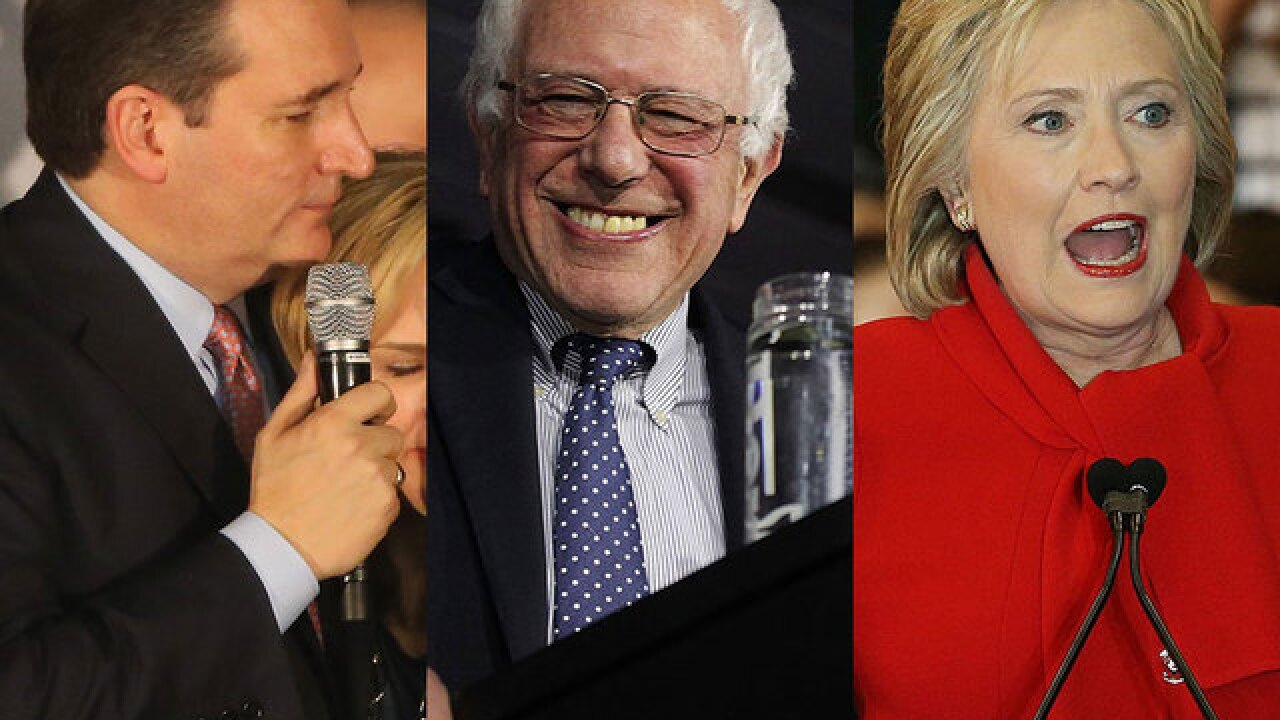 (Updates with results and more analysis)

Ted Cruz is a big winner.

Hillary Clinton is a little winner, relieved not to be a loser.

Bernie Sanders is a winner in the spin contest and almost in the voting, not bad for a socialist in 21st century Iowa.

Clinton may have claimed victory prematurely Monday night, but her long-range prospects aren’t wildly changed by the Iowa results. She remains the underdog in Sanders’ neighboring state of New Hampshire next week, but leads by wide margins in the big contests that follow in South Carolina on Feb. 27 and the delegate-rich Southern states on March 5, Super Tuesday. She denied Sanders a slam-dunk and that’s enough to remain the favorite.

There is no frontrunner on the Republican side and a whole lot of chaos and cannibalism ahead.

Trump said if he didn’t win Iowa it would have been a huge waste of his precious time. It could be worse for him than that. Trump’s whole shtick is that he is a winner. That shtick is now stuck.

Trump lost to a guy who isn’t even a celebrity, a first-time senator whom he says is reckless, nasty and possibly Canadian. Trump threw everything he had at Cruz in the final stretch and it wasn’t enough – and it wasn’t even close. Trump barely beat Marco Rubio.

For his part, Cruz focused his whole campaign on Iowa and its large evangelical flock of Republican caucus-goers. It worked. His victory follows a classic Iowa Republican pattern, echoing Mike Huckabee’s 2008 win and Rick Santorum’s in 2012. Neither of those two went any further than Iowa, but Cruz has huge financial backing, big-league debate skills and national support from the party’s far right wing.

Trump’s foes and critics have hoped that there was something illusory or anomalous about his gaudy poll numbers, that the Trump phenomenon somehow wasn’t for real. That balloon of mainstream Republican wishful thinking can now float from Iowa to New Hampshire.

Cruz’s victory, however, offers no comfort to the so-called GOP establishment that is convinced nominating Ted Cruz would be partisan suicide. Many might prefer Trump, but they would vastly prefer “none of the above.”

Now that Trump can’t run the table, there is more breathing room for a single “establishment” candidate to emerge, one the party core can arm to do battle with the demon dragons Trump and Cruz.

That won’t happen until after New Hampshire next week.

Trump has big leads in the New Hampshire polls, though there is now reason to doubt whether his poll numbers are accurate. But New Hampshire holds a primary not a caucus and organization matters less there than in Iowa, where Cruz had good one. A Trump win would not be a surprise and might not give him much momentum. Same with a second place finish for Cruz.

Rubio could be in a decent position to become Mr. Mainstream. Even with another third place finish, he would still be the top guy not named Cruz or Trump. Though he isn’t universally thought to be an “establishment” Republican, they’ll back him and he already has plenty of big donors.  Now conventional wisdom says he has momentum coming out of Iowa. Rubio can probably fight past New Hampshire no matter what.

Kasich was invisible in Iowa and is way behind in the battles for money and “free media” that is press coverage. He needs a huge showing in New Hampshire to stay alive and that is not unthinkable. He has won the newspaper endorsement sweepstakes in New Hampshire and also was endorsed by The Boston Globe and The New York Times.

Regular Republicans would be happy to rally around Kasich if they only had some rational reason to do so. Some New Hampshire polls have Kasich in second place. If Kasich can finish in second in New Hampshire, it would be a win in the expectations game and Bill Clintonesque “Comeback Kid” moment. For at least a moment, Kasich could ride that balloon of wishful Republican thinking.

Chris Christie needs a big New Hampshire showing as much as Kasich, but the polls haven’t yet shown that could happen. If he finishes below third in New Hampshire, there will be calls for him to “get out for the good of the party.”

That leaves Jeb Bush – and it leaves him exactly where he has been for most of the race, at the end of the list. Whatever happens in New Hampshire, and good omens are nonexistent, Bush theoretically has some staying power because he has money, endorsements and credibility as general election candidate. None of that has impressed rank-and-file Republicans yet.

So after New Hampshire, the calls will begin for the weak kittens in the litter to be sacrificed. Republicans used to be a party of politicians who took such calls. No more.

“The establishment doesn’t have the power to suggest, much less compel, anything,” Alex Castellanos, a veteran Republican consultant, told Politico. “If they did, they wouldn’t have to: This process wouldn’t look as it does now.”

Nonetheless, after New Hampshire there will be an effort to anoint someone – anyone – to tackle Trump and keep Cruz in the backfield. The results in Iowa didn’t shine light on who that might be. But now that Trump has proved he isn’t actually invincible, his Republican opponents might start doing what modern campaigns do best – attack. It will be riveting political drama to see how Trump responds to heavy artillery – and to losing.

Iowa didn’t shuffle the deck much for the Democrats. Statistically, the caucus results were a tie. In the gymnastics of spin and expectations manipulation, that will probably be scored as a slight victory for Sanders. But Clinton’s campaign is built for a long haul.

It would be smart to remember that in 2008, insurgent Barack Obama clobbered Clinton by nine points, relegating her to third place. The Bernie Sanders wave is a ripple in comparison.  Further, Iowa and New Hampshire are two of the five whitest states in the country and Clinton polls far better with minorities than Sanders.

Overall, the supremely abnormal 2016 campaign looks a tiny, tiny bit more normal than it has so far. That’s mostly because Donald Trump lost, giving some credence to the idea that he isn’t wholly exempt from the laws of politics. Nor did it yield the headline, “Socialist Sanders Wins in Iowa.”

But at least Iowa has fulfilled its traditional role. It gave unknowns a chance. It helped the eventual Democratic nominee by giving a win to the most ideologically extreme Republican. It gave Hillary another cold shoulder, if not an outright gut punch.

Using the awkward caucus format in one of the whitest and most rural states in the country, Iowa reflected and magnified the views of the most politically active white voters in both parties. That is a terribly unrepresentative slice of America and a very poor way to start a long campaign.

There’s plenty more opportunity for weirdness ahead, but time is running short. There are only 10 months left before Election Day.