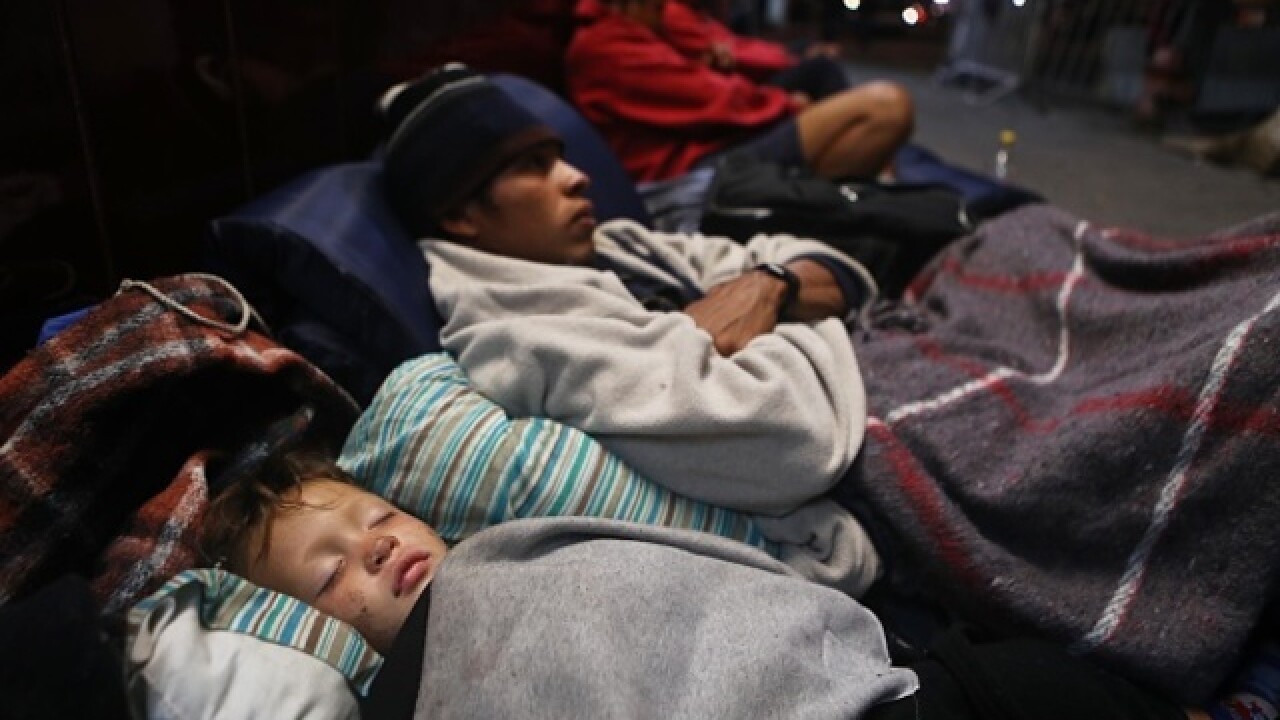 Copyright 2018 Scripps Media, Inc. All rights reserved. This material may not be published, broadcast, rewritten, or redistributed.
Mario Tama
TIJUANA, MEXICO - NOVEMBER 23: Honduran mother Nubia (C) holds her son Wilmar, 5, as they wait in line for information about applying for asylum in the U.S. on November 23, 2018 in Tijuana, Mexico. They traveled for 43 days in the 'migrant caravan' before arriving in Tijuana. (Photo by Mario Tama/Getty Images)

In its lawsuit, Baltimore asserts the U.S. State Department earlier this year quietly expanded its definition of "public charge" — someone the United States deems likely to be primarily dependent on government aid. It says the change is not only frightening legally entitled immigrants from applying for public programs but impeding otherwise eligible immigrants from entering the country in the first place.

The lawsuit says the changes allow consular officers to consider whether green card applicants or their relatives, including U.S. citizens, ever benefited from non-cash benefits such as housing vouchers, subsidized school lunches or free vaccinations. Federal law has long required those seeking green cards to prove they won't be a burden — or a "public charge" — but new rules detail a broad range of public programs that could disqualify them.

Maryland's biggest city asserts that immigrants are already fearful of using government programs that they or their families need. It notes that African immigrants' participation in the federal Head Start program has "virtually ceased" in Baltimore so far this school year.

Mayor Catherine Pugh said her city is "known for embracing immigrants" and said the Trump administration's creation of "additional obstacles to those seeking to live in Baltimore" is un-American and a perversion of national ideals.

"We are determined to resist this latest attempt to deprive our immigrant communities of basic services," Pugh said in Baltimore, which is among the U.S. cities that have been trying to reverse population loss with various immigrant-friendly measures.

The State Department did not immediately respond to an email seeking comment about Baltimore's lawsuit, which calls for the policy change to be declared unconstitutional and for the public charge provision to return to the old definition.

Baltimore's lawsuit, filed in Maryland's U.S. District Court, was done in collaboration with the Democracy Forward Foundation, a group with Democratic party ties.

Anne Harkavy, the Washington-based organization's director, portrays the State Department's public charge policy as "yet another example of the Trump administration's disturbing hostility toward people born in other countries and their families."

Meanwhile, the U.S. Department of Homeland Security wants to redefine a "public charge" as someone who is likely to receive public benefits at any time. And the definition has been broadened to include SNAP or food assistance, Medicaid, housing assistance or subsidies for Medicare Part D. Refugees or asylum seekers would be exempt.

That proposal published on Homeland Security's website has already appeared in the Federal Register and has triggered a 60-day public comment period before taking effect. The period for comments closes next month.

In general, immigrants are a small portion of those receiving public aid. The Trump administration's immigration restrictions are part of a push to move the U.S. to a system that focuses on immigrants' skills instead of emphasizing the reunification of families.