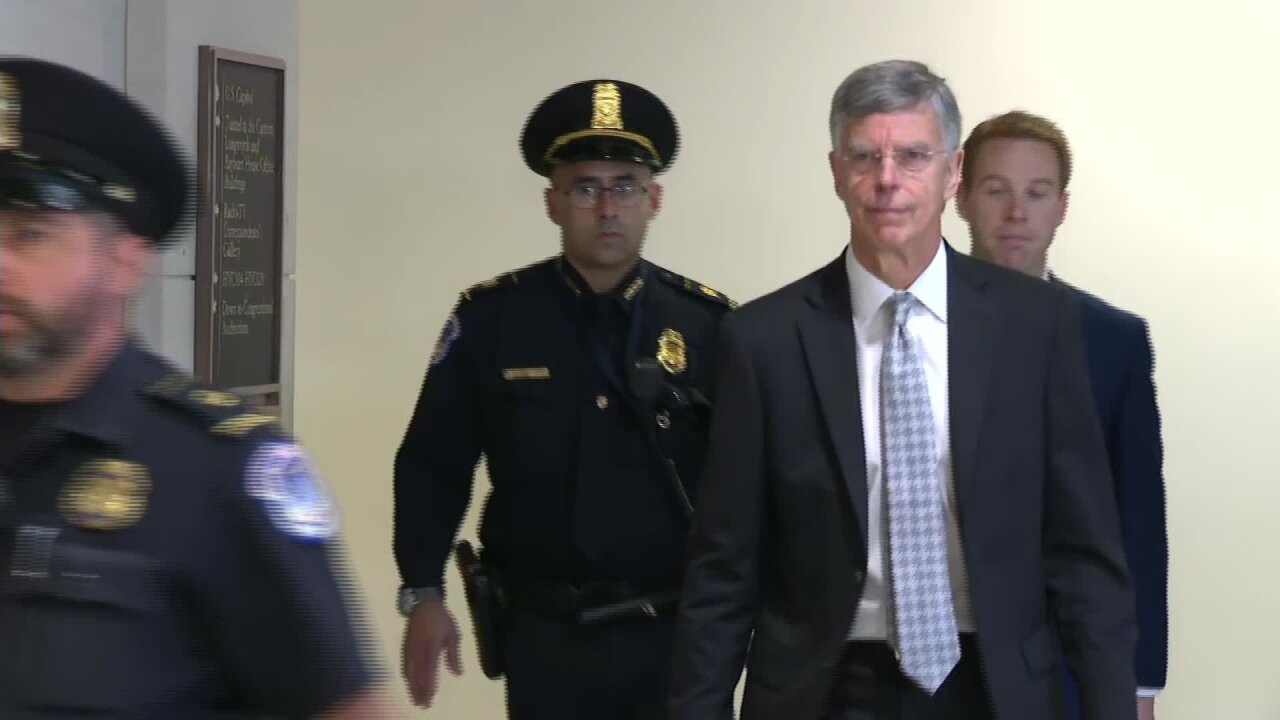 The Top US diplomat in Ukraine Bill Taylor testified Tuesday that he had been told President Donald Trump would withhold military aid to the country until it publicly declared investigations would be launched that could help his reelection chances — including into former Vice President Joe Biden, according to a copy of Taylor's opening statement obtained by CNN.

"During that phone call, Ambassador Sondland told me that President Trump had told him that he wants President Zelensky to state publicly that Ukraine will investigate Burisma and alleged Ukrainian interference in the 2016 US election," according to the testimony.

Sondland told Taylor he'd also made a mistake earlier by telling the Ukrainian officials that a White House meeting with Zelensky "was dependent on a public announcement of the investigations," Taylor said.

"In fact, Ambassador Sondland said, 'everything' was dependent on such an announcement, including security assistance," Taylor testified.

He testified that Trump wanted Zelensky "in a public box" by making a public statement about ordering the investigations.

"Ambassador Sondland tried to explain to me that President Trump is a businessman. When a businessman is about to sign a check to someone who owes him something, he said, the businessman asks that person to pay up before signing the check," Taylor testified, adding that Volker had used the same phrase.

"I argued to both that the explanation made no sense: the Ukrainians did not 'owe' President Trump anything, and holding up security assistance for domestic political gain was 'crazy,' as I had said in my text message to Ambassadors Sondland and Volker on September 9," Sondland added.

Democrats described Taylor's testimony as damning for the President.

"All I have to say is that in my 10 short months in Congress ... it's my most disturbing day in Congress so far," said Rep. Andy Levin, a freshman Democrat from Michigan.

"This testimony is a sea change. I think it could accelerate matters," said Democratic Rep. Stephen Lynch of Massachusetts. "This will, I think, answer more questions than it raises. Let's put it that way."

In a lengthy and detailed opening statement, Taylor said that he and Sondland spoke by phone about why the aid was frozen, and Sondland cited the need for Ukraine to open an investigation among other reasons, according to the sources. Sondland told Taylor that the investigations potentially included both Ukraine's involvement in the 2016 election and Burisma, the Ukrainian energy company that hired former Vice President Joe Biden's son Hunter Biden, the sources said.

Asked about Taylor's comments, a source familiar with Sondland's testimony said that Sondland cited, in addition to the investigations, that the aid may have been frozen because the Europeans weren't giving Ukraine enough and corruption in general. The source said Sondland was only speculating when he referenced the political investigations into the 2016 election and Burisma.

"He made very clear in his testimony that nobody would give him a straight answer" about why the aid was being held up, the source said about Sondland's testimony.

Text messages between Taylor and Sondland and provided to Congress show that the two discussed the aid being frozen on the phone, amid concerns Taylor had raised that it was being held up in order to help Trump politically.

"As I said on the phone, I think it's crazy to withhold security assistance for help with a political campaign," Taylor texted Sondland on September 9. Sondland responded that Taylor's assertion was incorrect, a conclusion he reached after speaking directly to Trump.

The opening statement from Taylor took roughly an hour to deliver and was 15 pages long, according to multiple people in the room. Sources said that the statement rich with detail, and that there were audible sighs and gasps from lawmakers as he delivered his statement.

"We're trying to see if any witness has a connection between foreign aid and pausing the foreign aid," Meadows said. "As it relates to the quid pro quo, we haven't had any witness suggest that."

Taylor's opening statement was intended to fill in the gaps of his text messages with US diplomats about Ukraine that have formed a key part of the impeachment investigation into Trump and Ukraine, according to another source familiar with his testimony.

Taylor, who is testifying before the three House committees leading the Democratic impeachment inquiry, planned to lay out the reasoning behind his different WhatsApp text messages in his opening statement Tuesday, the source said. Taylor planned to include a chronology of events, according to the source, dating back to June, when Taylor assumed the post as ambassador, through October.

Taylor's testimony is among the most significant for Democratic impeachment investigators because of text messages he exchanged with Sondland and former US special envoy for Ukraine Kurt Volker about the freezing of US security aid to Ukraine.

Lawmakers in the closed-door deposition said Taylor's testimony they heard Tuesday appeared to be inconsistent with what Sondland had testified, though they did not get into specifics.

"I think Gordon Sondland may very well have to come back. He's got some explaining to do," said Democratic Rep. Gerry Connolly of Virginia.

Asked whether Taylor's testimony throws into questions what Sondland told the committees, GOP Rep. Francis Rooney of Florida said: "Yeah I think there is asymmetry on what we heard today and what Sondland had to say....There were some things that seemed a little at variance here."

Lynch said there were "inconsistencies" in testimony and "factual assertions."

Taylor did not bringing any new documents to the committee, and he will just reference those that have already been made public, the source said. Volker, who is no longer at the State Department, provided the texts to Congress. Other witnesses who have appeared, including Sondland, have been prevented by the State Department from providing documents.

Taylor is appearing behind closed doors before the House Intelligence, Foreign Affairs and Oversight committees as part of the Democratic impeachment inquiry fueled by whistleblower allegations that Trump solicited foreign election interference from Ukraine to investigate his potential 2020 political opponent.

Taylor was issued a subpoena to compel his testimony on Tuesday morning in response to the Trump administration's direction to witnesses not to testify in the impeachment probe, according to an official working on the inquiry. That's the same thing the committees have done for other current State Department employees who have testified.

The witnesses who have appeared so far have said that the President directed his personal attorney, Rudy Giuliani, to take the lead on US-Ukraine policy as Giuliani was pushing for an investigation into former Vice President Joe Biden and his son Hunter Biden.

Taylor, as the current acting ambassador to Ukraine, is in a difficult and delicate position testifying Tuesday, the source said. Taylor's view is that he is there to speak to committee and answer their questions, and he's not looking to issue his own statement publicly.

Other officials who have given testimony and also delivered opening statements were in different positions: Volker had already resigned and Sondland, a major Trump donor, was unlikely to be fired by Trump. Former US Ambassador to Ukraine Marie Yovanovitch , who testified earlier this month, is still a State Department employee but is not currently in an active ambassador role.

Taylor plans to return to Ukraine on Wednesday, the source said. He wants to keep his job, and thinks it is important work.

A career diplomat, Taylor had to be convinced to take the Ukraine job in the first place, sources familiar with conversations explained. Volker recommended Taylor to Secretary of State Mike Pompeo for the post after Yovanovitch's unexpected removal in the spring. Taylor then met with Pompeo, State Department Counselor Ulrich Brechbuhl and Volker at the department at the end of May.

The conversation focused on US policy towards Ukraine and Pompeo's view of that policy. The secretary of state argued the Trump administration had a robust policy -- a position he has taken in numerous interviews -- and the elephant in the room -- Yovanovitch's ouster -- was not extensively addressed, the sources told CNN.

After the meeting, Taylor texted back and forth with Volker, and among other things he asked why Volker would not want to take the job. Volker said he was better off in his current role -- covering Ukraine as well as Washington and allies and NATO. Taylor was on the ground in Ukraine, serving as de-facto ambassador, about a month later.