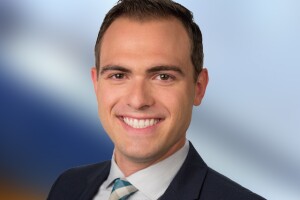 Matt Boone is a reporter for 10News, although his official title is ‘multimedia journalist.’ What does that mean? Often referred to as a one-man-band or MMJ for short, he shoots, writes and edits most of his own stories.

It’s something he has been doing well before he ever entered news. With a camcorder and some thrift store costumes, Matt spent hours as a kid shooting and editing short films with his friends.

That passion for visual storytelling eventually landed him a job at KBAK/KBFX, the CBS and Fox affiliate in Bakersfield. There he covered everything from education to environmental issues and won a regional Edward R. Murrow award for his reporting on victims of the Erskine Fire.

His first gig in news was as an intern at KGO in San Francisco. After that he spent several years at KABC in Los Angeles as a writer.

Matt grew up in the Bay Area in a little town called Lafayette. He is a graduate of Yale University where he majored in Music. You can often find him swimming, lying on the beach or trying out San Diego’s amazing selection of craft brews. Catch his stories weeknights at 4, 5, 6 and 7.