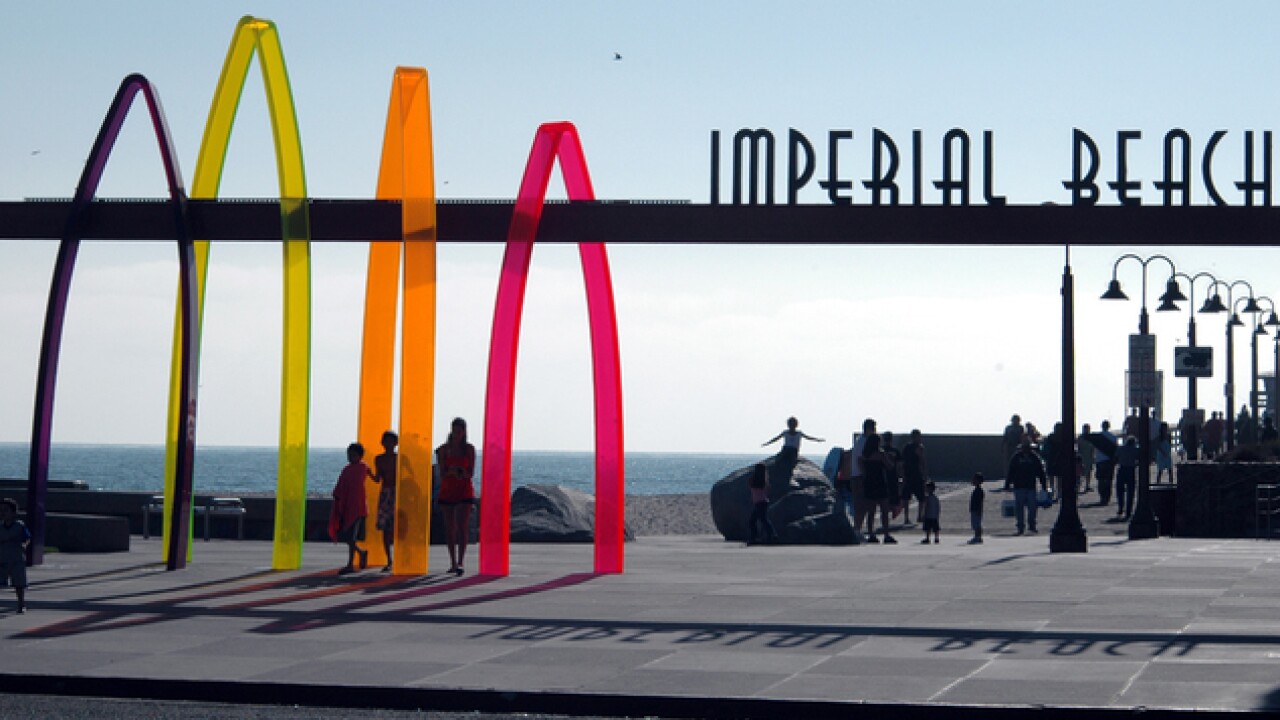 IMPERIAL BEACH, Calif. (KGTV) - Imperial Beach has been described as the “epitome of ‘Classic Southern California,’” thanks to its beautiful beach, parks and trails that mesh well with its laid-back beach town atmosphere.

The city affectionally known as “IB” is located along the Pacific Ocean in San Diego County’s South Bay, just north of the U.S.-Mexico border.

But besides the sand and surf the city is known for, there is definitely plenty more to do and see -- and eat -- during a trip to IB.

Portwood Pier Plaza at Imperial Beach Pier
Evergreen Ave., just west of Seacoast Dr.
-- Here is where you’ll want to take your mandatory Imperial Beach photo. Right at the entrance of the Imperial Beach Pier is the iconic “Surfhenge,” which essentially welcomes visitors to IB. You can learn more about Imperial Beach’s role in surfing history, visit area shops or hang out for a day of people-watching.

Outdoor Surfboard Museum
Palm Ave., between 3rd St. and Seacoast Dr.
-- Imperial Beach celebrates surfing culture and its influential figures with an array of surfboards lined along the street. While it’s not a museum in the traditional sense, the exhibit pays tribute to 26 “shapers” who are important to the culture’s growth over the years.

Spirit of Imperial Beach statue
706 Ocean Ln.
-- Just north of Imperial Beach Pier, the bronze statue of a surfer holding a longboard was designed by artist A. Wasil and honors the community’s storied surfing and sandcastle history.

Bayshore Bikeway
-- There are various bike trails and paths for riders to explore IB, but one of the more popular routes is the Bayshore Bikeway. The 24-mile stretch takes riders on a tour around San Diego Bay, where they can see parts of downtown San Diego, Coronado via the Silver Strand, Chula Vista, and -- of course -- Imperial Beach.

Katy’s Café
704 Seacoast Dr., Ste A
www.katyscafeib.com
-- This breakfast and lunch spot has been a go-to for locals for many years, thanks to its array of sandwiches and smoothies. It’s also in a great location that is close walking distance to the beach!

Big Kahuna’s
600 Palm Ave.
bigkahunasib.com
-- In the mood for a tasty burger? Head to Big Kahuna’s for hamburgers in a variety of styles, including the famed Big Kahuna Burger that was featured in the hit film “Pulp Fiction.” Aside from the burger that Jules the hitman took a liking to, Big Kahuna’s offers classic Hawaiian fare such as chicken teriyaki, kalua pork, the loco moco and saimin noodle soup.

Cow-A-Bunga
10 Evergreen Ave., Ste E
cowabungaicecreamandcoffee.com
-- You can’t ask for anything better than ice cream or coffee (or both?) with an ocean view. Cow-A-Bunga is oh-so-close to the Imperial Beach Pier and it’s the perfect spot to satisfy your sweet tooth (or caffeine fix) while you’re taking in that view of the water. The menu is long when it comes to ice cream offerings, so there should be something for everyone!