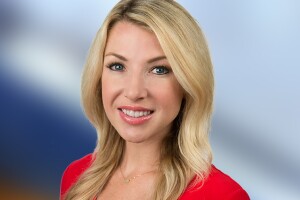 Jennifer joined the 10News team in September of 2017 as an investigative reporter for Team 10.

Before moving to America's Finest City, she spent two and a half years covering breaking news and special reports for CBS Los Angeles. Jennifer was awarded an Emmy during the summer of 2017 for her reporting on a man who was wrongfully imprisoned for murder, and released 23 years later.

Prior, Jennifer reported for KTNV in Las Vegas, covering national interest stories like the alleged road rage shooting death of a Las Vegas mother, and the federal government's fall out with cattle rancher Cliven Bundy.

Jennifer got her start with on-air reporting at KWES Newswest 9 in Midland-Odessa in West Texas. That's where she learned how to say "y'all".

Before going on-air, she worked as an investigative producer for KVOA in Tucson, AZ. While at KVOA, Jennifer won an Edward R. Murrow Award for an investigation into the threatening work environment at Child Protective Services. She has been nominated for four other Emmy awards and an Associated Press award for her investigations and special projects.

Jennifer got her foot in the door of this business by starting as a morning news producer for KION-TV in Salinas, CA.

She is a graduate of the University of Colorado at Boulder with a bachelors degree in broadcast news. While living in Colorado, Jennifer interned for the investigative news team at KUSA-TV in Denver.

As a member of the Investigative Reporters and Editors, Inc., Jennifer has traveled to New Orleans, San Francisco, Miami, Baltimore and Phoenix for national investigative conferences and workshops. In 2009, she was awarded the IRE's national Jennifer Leonard Scholarship.

Jennifer has done extensive post-baccalaureate pre-medical schoolwork to better her understanding of medical stories. She has been trained as a nationally-certified Emergency Medical Technician and has worked in trauma departments to develop her knowledge of the healthcare industry.

Jennifer is a native San Diegan and loves yoga, surfing and taste testing donuts and burritos.

She is always looking for stories so please message her ideas on any of her social media listed above.